I’m not in the habit of using the word “piffle.” Yet that sprang to mind as I was watching Knight and Day, and the more I thought about it, the more appropriate the outdated word seemed. This plush escapist thriller/romantic comedy isn’t bad, necessarily. It’s just so insubstantial that it evaporates as soon as you leave the theater. What piffle this movie is. 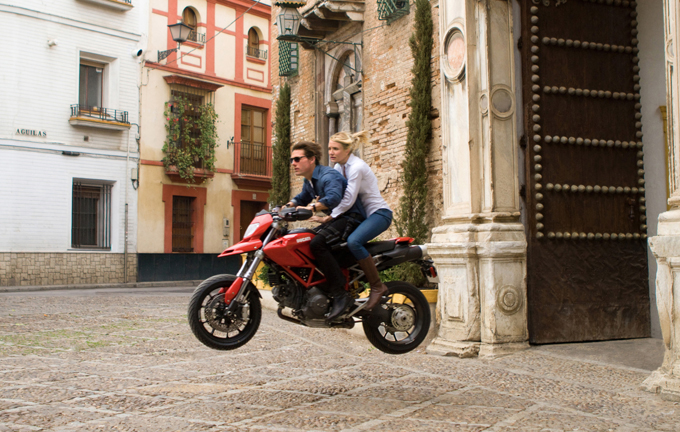 The terrible pun in the title isn’t explained until late in the film, and then it’s not much of a payoff. Tom Cruise portrays Roy Miller, a CIA operative who’s hunted down by his own organization after being set up by his traitorous partner (Peter Sarsgaard), who has convinced everyone at the agency that Roy has gone insane. This sounds like the premise of one of Cruise’s hard-core action pictures, but Cruise plays the loose-cannon Roy with a flippancy that’s funny and mildly disturbing in context. After preventing one sympathetic character from pursuing him by shooting him in the leg, Roy stops to note that the wound is superficial and cheerfully says, “You’re good!” while flashing the guy a thumbs-up sign and that familiar grin. It’s as if Joel Goodsen, Cruise’s character from Risky Business, had grown up to be a government assassin.

This is a nice place for a Tom Cruise action-comedy to start. The star’s personality has become steadily more overbearing, to the point that he now reminds you of the stranger at the bar who slaps you on the back, assigns you a nickname, laughs loudly at your feeblest jokes, and won’t go away until he’s given you his business card and the full pitch. However, Cruise’s scene-stealing supporting turn in Tropic Thunder two years ago seems to have clued him in to how to play the more ruthless edges of his screen persona for laughs. In this movie, his brutal, wear-you-down brand of charisma sits well on a character with deep reserves of phony good humor.

That early promise is soon frittered away, however. Garage owner June Havens (Cameron Diaz) meets Roy and flirts with him on a near-empty airline flight from Wichita to Boston. She then emerges from the lavatory to discover that Roy has had to fight and kill everyone else on the plane: pilots, air marshals, flight attendants, and passengers. A scared and pissed-off June ends up riding shotgun with Roy in a series of shootouts and car chases in exotic locations from Salzburg to Seville.

Here and in the current, similar, much more dislikable Killers, we see the same comedic pattern: The man is the cool, badass professional while the woman turns into a shrieking liability when the shooting starts. Why do so many movies do this? In fairness, most of us — male or female — would probably freak out if an action hero suddenly started picking off bad guys around us. Sometimes we do see an action-comedy about two men where one of them keeps losing his head amid the chaos. (Kiss Kiss, Bang Bang is a pretty good example.) And Knight and Day features a male whiz-kid scientist (Paul Dano) who’s even more of a useless ninny than June in the middle of all the bloodshed. Still, you’d think that more filmmakers would recognize the comic possibilities of making the woman more capable in a crisis than the man. Among recent movies, only Kick-Ass and the more-subversive-than-we-thought Get Smart do that.

Knight and Day’s clichéd gender roles make us appreciate The Girl With the Dragon Tattoo (see below) all the more, but they’re not the only reason why this movie is so forgettable. The script by first-time screenwriter Patrick O’Neill is boilerplate stuff. We’ve already seen Diaz play this part, not to mention other actresses. This film might have worked better with a lead actress who hasn’t done many action films, like Renée Zellweger or Amy Adams. The two leads have little chemistry together, and the romance is little more than perfunctory when it’s supposed to give this movie its traction.

Director James Mangold manages to snatch a few laughs by staging action sequences from June’s limited point of view, with an offscreen Roy making his presence felt through riderless motorcycles falling from the sky and bad guys dropping dead around her. The tone is hallucinatory at times, which makes sense because June is frequently drugged or sedated. There’s one funny montage when June’s wavering consciousness leaves us to figure out how she went from being tied up in a torture chamber to parachuting from a falling airplane to lying in a hammock on a beach.