The Twilight movies have frustrated me, not because they’re made out of junk but for the opposite reason. Stephenie Meyer’s mega-selling series of novels gets unfairly knocked because the fan base is mostly teen and pre-teen girls. If it weren’t for that (and Meyer’s bad prose), I think serious cinephiles and sci-fi fans would be more willing to admit how intriguing all the vampires-vs.-werewolves stuff is.


For all their many flaws, the novels spin a fully imagined, highly detailed universe with an intricately worked-out mythology and cinema-ready action sequences that naturally fit the big screen. These books could have easily been made into terrific movies. 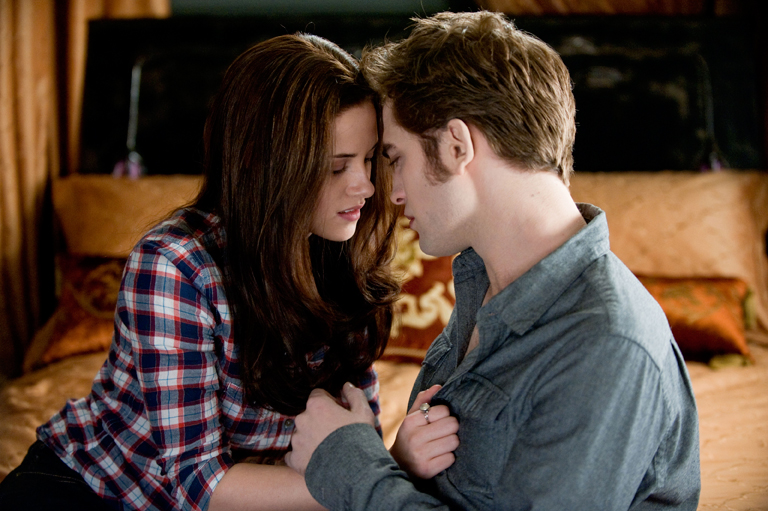 They haven’t been, mostly because the directors have been miscast: one specialist in realistic drama (Catherine Hardwicke, Twilight) and one guy with a comedy background (Chris Weitz, The Twilight Saga: New Moon). Neither of them have ever displayed any sort of flair for the supernatural or the operatic stylings that would have fit this series about undying love. What a pity the producers never thought to hire Baz Luhrmann or any one of a number of Spanish-speaking directors who could have done this series right: Guillermo Del Toro, Alejandro Amenábar, Juan Antonio Bayona.

The third film in the series, The Twilight Saga: Eclipse, comes closest to the cinematic experience it should be. Picking up where we left off: Our high-school student heroine Isabella Swan (Kristen Stewart) remains thoroughly infatuated with courtly vampire Edward Cullen (Robert Pattinson) while struggling to admit her feelings for rugged werewolf Jacob Black (Taylor Lautner) as well. Further complicating her situation with Jacob is Victoria (an atypically fierce Bryce Dallas Howard), a vampire who wants Bella’s blood in order to get back at Edward for having killed her lover. Victoria’s so hellbent on revenge that she’s raising an army of newly created vampires to invade Forks, Wash., and overwhelm Bella’s protectors through sheer force of numbers. At this desperate point, Jacob steps in, offering a truce in his tribe’s ongoing feud with the Cullens to help them repel this new threat.

The new director is David Slade, who previously made the vampire flick 30 Days of Night and the unforgettably perverse Hard Candy. Once again, the match between director and material isn’t a completely happy one. Oh, Slade’s thriller instincts serve the material well, especially in the climactic battle scene when the werewolves launch a surprise attack on Victoria’s vampires. Yet Slade and gifted cinematographer Javier Aguirresarobe never give the movie a distinctive look — a scene in Florida looks the same as the daylight scenes in Washington state, and the flashback sequences look the same as the ones in the present day.

Though there’s less static in this movie than in the previous two, there’s still too much of it and too much of Bella standing around helplessly while Edward and Jacob flare their nostrils at each other. The dead air gives you time to contemplate the Edward-Bella relationship, which remains creepy in all the wrong ways. This especially goes for Bella’s repeated wish to become a vampire so she can be with Edward for all eternity, despite Edward and the rest of the Cullens’ attempts to dissuade her. The movie huffs and puffs, but the romance stubbornly refuses to spark.

With all that, the script by Melissa Rosenberg (who has adapted all three films in the series) enjoys more good moments than usual. For example, there’s the clever and subtle way that Bella’s mom (Sarah Clarke) and best friend (Anna Kendrick, underutilized here), who know nothing about any vampires, unwittingly let Bella know that she might be headed down the wrong path. The movie’s racial subtext, when it traces the roots of the vampires-werewolves war to the first contact between Native Americans and Europeans, is handled without too heavy a touch. Despite the general fuzziness of the lead performances, there’s a good scene in a tent when Jacob and Edward quietly come to a mutual understanding about their places in Bella’s life.

Much like its predecessor New Moon, this movie is blessedly unafraid of lightening up every once in a while — confronted with the umpteenth sight of a bare-chested Jacob, Edward finally snaps, “Doesn’t he have a shirt?” The funniest scene in the entire series happens when Bella’s befuddled but good-hearted dad (Billy Burke, whose understated work in these movies isn’t appreciated enough) tries to give her a sex talk that makes both parties extremely uncomfortable. The movie’s wit goes pleasingly dark, too, in the flashbacks showing how Cullen clan members Rosalie and Jasper (Nikki Reed and Jackson Rathbone) became vampires. When Rosalie takes ultimate revenge on the abusive ex-fiancé who killed her, she shows up to the occasion in a wedding dress — nice touch!

These elements make Eclipse the most watchable Twilight movie yet. It’s too bad the series is changing directors yet again, to another unknown quantity. (Dreamgirls’ Bill Condon is taking over the two movies that Breaking Dawn has been split into.) A single director with a strong vision might have made this into the series that it should have been. Then again, if things continue to improve, we might get some decent films out of this series before it’s over.