Since the turn of the new century, Michael Douglas has gradually been phasing himself out of the stardom that he enjoyed in the late ’80s and early ’90s, when he often played angry white men under siege. These days, he’s more likely to be found portraying former masters of the world who’ve mellowed or gone to seed in their old age. A meditation on aging that promises more than it delivers, Solitary Man continues the pattern, as the upcoming sequel to Wall Street certainly will. 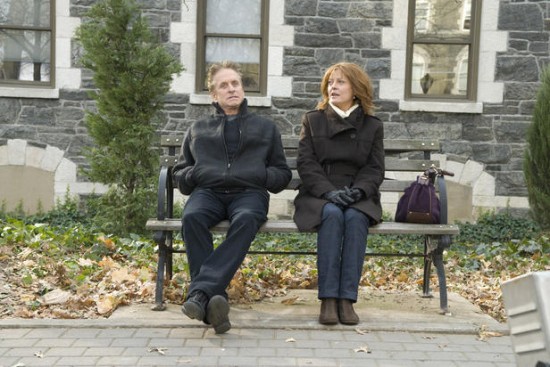 Douglas portrays Ben Kalmen, a former king of car dealerships in the Tri-State area who’s now in the sixth year of a protracted self-destructive spiral, having deliberately sabotaged both his business and his marriage by cheating on them after decades of honest behavior. Now he’s trying to get back into the car dealership game through the offices of his current girlfriend (Mary-Louise Parker), but that goes south in a hurry when he beds her teenage daughter (Imogen Poots) while taking her to a college interview at his alma mater in Boston. The daughter doesn’t require too much seducing, by the way. She really, really hates her mom. Ben really, really hates the loss of his youth, and his behavior is his ineffectual way of raging at it.

The film is directed by the screenwriting team of David Levien and Brian Koppelman, who are still best known for writing the taut 1998 poker drama Rounders. Their current effort is much looser, with Ben drifting through a series of vignettes involving a straitlaced college kid (Jesse Eisenberg), an ex-wife whom he’s improbably still on good terms with (Susan Sarandon), and a sad non-confrontational daughter who’s reached the end of her rope with him (Jenna Fischer). Sometimes the movie catches fire with these — an uncredited Olivia Thirlby acquits herself well as a college girl who’s morally disgusted when Ben propositions her, and all the scenes pop between Douglas and Danny DeVito as the owner of the diner where Ben used to eat when he was in school.

Still, the script’s diffuseness doesn’t do similar favors for everyone in this heavyweight supporting cast. (Parker is particularly off as a coldly vindictive character.) The movie tries to build toward a subtle shift in perspective that allows the antihero to recognize his own shortcomings, but the self-inflicted misfortunes that befall Ben don’t lead convincingly to the late scene with his ex-wife, in which he accounts lucidly for his actions. The film could have succeeded by being more wrenching like Chloe this past spring, or it could have made Ben’s enlightenment less clear-eyed like Smart People two years ago. As it is, Solitary Man has an insubstantial feel to it when a bit more craftsmanship might have made it into a small success worthy of the talent that went into it. l