It might not matter to anyone else, but it does to me: Merkin was the last band I watched grow up onstage at The Wreck Room. That’s what’s fun about following local music: seeing assemblages of kids who are frankly not that great grow into more potent and assured units over time. Sure, Merkin’s grunge-based approach seemed a tad old hat in 2005, but these lovable River Oaks lads were the local scene’s perpetual “most improved bowler.” And even if they still haven’t quite stepped out of the shadows to surpass Blood of the Sun or Addnerim on pluck and guts the way The Stooges did The MC5, they’ve kept on getting better. 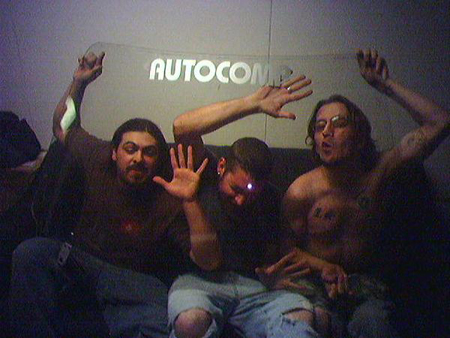 To wit: On Scatology, frontman Joe Fuentes shifts between dirty and clean guitar tones effectively, zipping up the neck with distorted octave runs while torturing his tonsils as though Kurt Cobain were the only other singer who ever existed. Genial, mohawked bassist Chris Donley and his pal Cameron Long on drums constitute an effective rhythm team, interlocking their parts to give the songs plenty of punch and power. Long in particular has strengthened his chops and is playing very effectively inside the music now, decorating it with flashy fills and providing essential support when Fuentes solos.

Those who’re suffering from Wreck Room nostalgia like I am can get a fix via Merkin’s live-at-the-Wreck closer, “The Delayed Inevitable.” I just wish they hadn’t overdubbed bullfight cheers on the track.