A classical music star was born last week at the final concert of the Piano Texas Festival in TCU’s Ed Landreth Auditorium. If one performance of one concerto is a reliable yardstick, 20-year-old Cheng Zhang’s journey through the Beethoven Fourth Piano Concerto with the Fort Worth Symphony showed a master in the making.


Not a Goliath like Van Cliburn but a transcendent poet nonetheless. Zhang’s solid technique and glowing sound gave the music a propulsive force and freshness that brought back memories of an earlier age, when pianists such as Solomon, Clifford Curzon, Dame Myra Hess, and TCU’s late artist-in-residence Lili Kraus were with us and when the Viennese school was alive and well in loving hands. That Zhang was born and brought up in China, in a totally different culture, makes his embrace of the style totally unexpected. 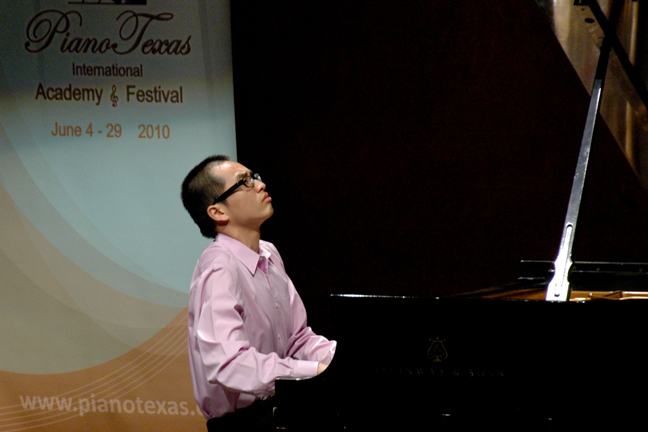 Eighty-nine students from around the world had applied for 24 openings in this year’s Piano Texas Festival, a three-week-long workshop of master classes, recitals, and concerts founded by TCU professor Tamas Ungar back in 1981. He’s still in charge and oversees the operation, which also includes a chamber music section coordinated by Dr. Jesus Castro-Balbi. Six pianists from the group were named to appear in two concerts with the FWSO, three at each program, each performing a complete concerto. To add interest, a mini competition was included and token awards of $250, $150, and $100 given to the first three winners. Zhang, in a league by himself, easily took first place.

He and FWSO conductor Miguel Harth-Bedoya worked brilliantly together, particularly in the strange middle movement, the slow, dramatic dialogue between piano and orchestra that has no parallel in the literature. The strings bark out a musical phrase, and after a pause the piano responds timidly with its own idea. To the next demand, the piano answers a little more strongly, almost pleading to be heard. The exchange continues until the solo instrument finally wears down the orchestra. Slowly the strings retreat, muttering to themselves in the lower registers as the piano gives what might be called a sigh of relief, expressed in a long, sustained, single-note arpeggio that ends in mid-air, a tiny wisp of sound. It’s a magic few minutes, and pianist and orchestra performed it as one. This happy collaboration cries out to be heard on FWSO’s regular subscription series. Let’s hope it’s being considered.

Another striking performance was in the opening concert. The diminutive 12-year-old Gregory Martin, looking like Haley Joel Osment back in his Sixth Sense days, played the whiskers off the Mendelssohn First Piano Concerto. Written as a crowd pleaser to show off the 1830 grand piano, the piece revels in octave leaps; jet-propelled scale passages in double octaves, thirds, and sixths; galloping arpeggios; and a host of other problems. The trick is to corral this three-ring circus into something meaningful, and young Martin belied his years by giving a fully realized performance. Tears ran down my cheeks watching the young musician show us what he’s accomplished. There’ll be more refinements down the road, and he’ll look more comfortable working with a conductor (Tomasz Golka here). But Martin is already a compelling performer.

Second place went to 27-year-old Yoon-Wha Roh, a Korean native who gave a slam-bang performance of the Rachmaninoff Second Piano Concerto that had the audience screaming by the end. She has a big sound, which can turn abrasive, and she seems to play from the head rather than the heart. All the notes were there, but I wasn’t drawn into the performance. A comment made by Kraus years ago came to mind as I was listening, “The piano is a percussive instrument, and a pianist spends his whole life trying to persuade you that it can sing.” Roh doesn’t sing yet but does enjoy beating the drum.

I thought the Russian entry, Anna Bulkina, who took third place, was a more interesting young artist. After celebrating her 24th birthday the day before the performance, she offered an engaging look at the Schumann A-Minor Piano Concerto. It took awhile for her to warm up –– the first movement sounded tentative –– but by the last she was totally involved and gave an exciting account of the dazzling music.

Two other finalists gave promising performances. Yun Wei of China, 15, tackled the Chopin First Piano Concerto and was doing well until memory slips broke her concentration, and Chiao-Wen Cheng, 24, of Taiwan, gave a solid performance of the Beethoven Fifth Piano Concerto. Surprisingly, Martin was not among the top three.

Two gold medalists from past Van Cliburn International Piano Competitions –– Alexander Kobrin from the 2005 contest and Jose Feghali from 1985 –– also presented programs. Both players repeated much of the music they had played in previous area appearances, so I skipped them to attend the 1993 fifth-place winner Armen Babakhanian’s recital instead. I wish I hadn’t. He played the Mozart variations on “Twinkle, Twinkle Little Star,” the Beethoven Appassionata Sonata, and the Chopin F-Minor Fantasy all alike: intense, harsh, and off the wall. His hardnosed playing, impersonating an orchestra, was more at home in his own transcription of Khachaturian’s score for the ballet Spartacus. Unfortunately, there’s little of melodic interest here. The love motif appeared briefly, and the waltz had some effect, but most of this is background music for stage business, and, without the dancers, it has limited appeal.

TCU director Ungar is already in Hungary overseeing a festival workshop there. Later in the summer he will go to Beijing, where he serves as artistic director of the Beijing International Piano Festival. His dedicated work in promoting young artists earned him a Presidential Scholars Teacher Recognition Award this year. Certainly his outstanding work in Fort Worth deserves a medal. l