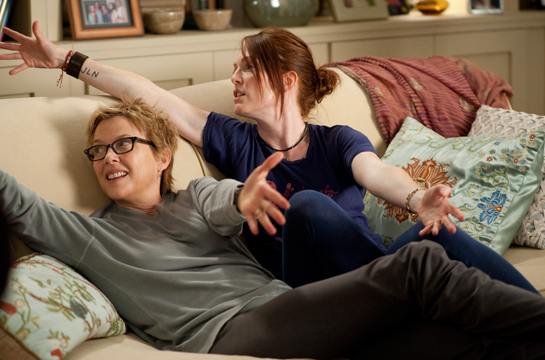 This is a movie we haven’t seen before. A number of critics have pointed out that most comedies ignore stable long-term married couples (which doesn’t say much for the memorability of Date Night), but this movie is unusual in another way too. Most gay-themed films, whether they’re angsty coming-out dramas or carefree light comedies, tend to focus on hot young singles. This one, on the other hand, addresses a comfortably settled middle-aged couple dealing with parenting issues. While Nic (Bening) makes a living as a physician, Jules (Moore) is a stay-at-home mom trying to start a landscaping business. The ball starts rolling when their 18-year-old academically overachieving daughter Joni (Alice in Wonderland’s Mia Wasikowska) and 15-year-old apathetic jock son Laser (Josh Hutcherson) contact the sperm bank that produced them, wanting to meet their biological father. This turns up Paul (Mark Ruffalo), a moderately successful restaurateur, organic co-op farmer, and confirmed bachelor who suddenly warms to the idea of fatherhood.

In addition to working on various TV shows, director/co-writer Lisa Cholodenko has made two lesbian-themed feature films: the 1998 addiction drama High Art and the 2003 music-industry drama Laurel Canyon. Neither of those were anything like an out-and-out comedy, yet in scene after scene here Cholodenko proves adept at finding humor in awkward situations, starting with Joni’s first phone call to Paul. When she describes her home life, he responds, “I love lesbians” and immediately makes the “I just said the wrong thing” face. On the other end, Joni makes the “I’ve already heard every possible faux pas about my family” face. (The movie’s full of great reactions like these from the actors.) A terribly funny scene results when the moms discover Laser watching their stash of gay male porn — Nic and Jules are already under the misapprehension that Laser’s gay, while he’s just trying to figure out why they watch men. Jules’ jargon-filled explanation is worth quoting: “Women’s sexual responsiveness is internalized, so for us it can be exciting to see responsiveness externalized, like with a penis.”

The crunchy California setting supplies Cholodenko and co-writer Stuart Blumberg with plenty of comic material. Nic’s antipathy toward Paul inspires her to an amusing rant against organic farming: “If I hear one more person say how much they love heirloom tomatoes, I’m gonna fucking kill myself.” The adults are heavily satirized for their touchy-feely expressions (“Is he going to help you grow?”), their complacent attitudes (Jules’ dead-on initial assessment of Paul: “He’s working the whole ‘alternative’ thing pretty hard”), and their white bourgeois L.A. cocoon (note Jules’ shabby treatment of the Mexican guy who works for her). Jules uses the word “Asian-y” to describe a potential landscaping motif. That business of hers is so doomed.

What keeps Nic and Jules from becoming perfect sitcom parents is the tension underneath this happy couple’s façade that eventually leads Jules into an ill-advised affair with Paul. Jules’ ongoing frustration at not having a career is a sore subject that flares up even during completely unrelated conversations, while Nic’s attempts to show her appreciation sometimes fall flat. The friction and the undercurrent of love between them are well captured by the two leads, who are (like so many other great screen couples) a study in pleasing contrasts. The sharp, focused, sardonic Bening plays well off the warm, scattered, soft-edged Moore, who speaks her lines with a bit of a flat drawl that clues you in that Jules comes from a much humbler background.

The movie’s title, taken from the song by The Who, is a bit too on the nose — the kids here are indeed supremely even-keeled compared to the adults, who turn into flaming wrecks. Yet this marvelously crafted film never feels overly worked out. Part of this is because the actors give such moving performances. Ruffalo captures the pathos of a man possessed by paternal urges he didn’t know he had and whose desire for a family ends up burning his reputation with the same kids who inspired it. Tragic as he is, it’s impossible to remain unmoved by Jules’ climactic mea culpa to her family, delivered by Moore in a devastatingly quiet, dry-eyed manner.

There are many different things to appreciate in The Kids Are All Right, like the ruthless economy of its leisurely paced storytelling or the way Nic’s references to red wine (she’s a huge fan) make this movie essential viewing for serious wine drinkers or the hilarious last line spoken by Laser that deflates any potential sappiness in the ending. Yet maybe the best thing about the movie is its simple, hard-won wisdom about staying together and getting through life’s challenges. This loving portrait of the most normal of unconventional families is a luminous masterpiece of American cinema.