Maybe the best part of Dinner for Schmucks is the opening credit sequence. It shows the construction of an elaborate diorama, depicting a daytime scene in a park populated by stuffed mice that have been dressed in tiny costumes and posed in romantic tableaux. It’s absurd, yet it’s so meticulously crafted that you admire it. The rest of this spottily funny comedy isn’t so meticulous, but it does have some moments. 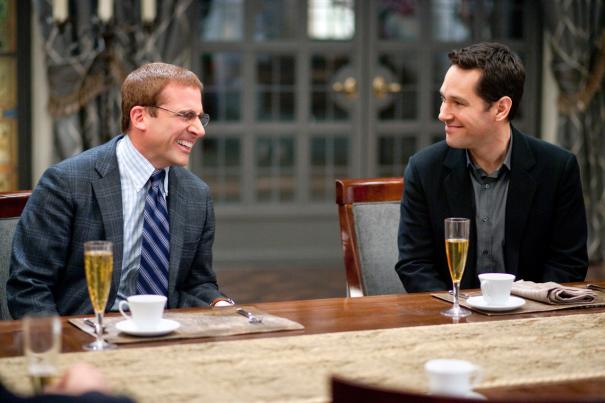 The movie began life as a French stage farce by Francis Veber, later made into a French film released in America in 1999 under the title The Dinner Game. Tim (Paul Rudd) is a financial analyst who discovers that to win the promotion that he desperately wants, he must participate in a game with all of his firm’s top brass. They hold a monthly dinner wherein the executives invite idiots and eccentrics as their guests and make fun of them without the guests’ knowledge. Despite the moral outrage of his girlfriend Julie (Stephanie Szostak), Tim is wondering how to get in on the game when he hits Barry (Steve Carell) with his car. Barry is an IRS worker who spends his free time making dioramas like the one in the opening credits. Tim can’t help but think, what a perfect idiot!

The new version makes the main character much less of a bastard. This is a mistake, as it gives Rudd much less to work with. Also, the original film never shows us the dinner, because the idiot stays in the businessman’s apartment, wreaking unintentional havoc on his life. Director Jay Roach (from the Austin Powers and Meet the Parents movies) sacrifices Veber’s structural tautness in favor of taking the story to multiple locations and letting us see the dinner game play out with the other idiots, including Zach Galifianakis as another IRS man who thinks he can control people’s minds. (Flight of the Conchords’ Jemaine Clement also turns up as a narcissistic artist, playing the type to much lesser effect than Russell Brand did in Get Him to the Greek.) The additional comic talent is nice, but we’re left in the weird position of laughing at the idiots while condemning the financiers for doing the same.

The movie has a trump card in Carell, who makes a truly inspired idiot and hasn’t had a chance to play one this pure since Anchorman. His Barry is a gleeful creation, grinning in self-satisfaction as he invents wild lies to extricate himself and Tim from each new crisis. He only creates more chaos, destroying both Tim’s career and Tim’s relationship with Julie, and he watches all the confusion unfold with a childlike sense of wonder that blocks out everything else, even regard for his own personal safety. His dialogue is sprinkled with malapropisms (“you like to curl up in the fecal position”). The funniest stretch comes when Barry has to deal with Tim’s demented ex-girlfriend (Lucy Punch) and winds up taking her sexual banter with mind-numbing literalness. Carell’s performance is the one part of this remake that matches the original, equaling the mesmerizing turn in The Dinner Game by the late Jacques Villeret. Dinner for Schmucks shows that our American idiots are just as good as the French ones. l