I read Elizabeth Gilbert’s polarizing memoir Eat, Pray, Love and found it as annoying as many others did, though I couldn’t help but wonder how many Gilbert haters would have been OK with the idea of a childless man in his early 40s coping with a wrenching divorce by convincing a publisher to pay his way as he traveled the world looking for spiritual enlightenment and good pasta. Somehow I think at least a small percentage of those people would have thought, “What a dashing and worldly thing to do!” These thoughts are the appetizer to the film version entitled Eat Pray Love (without the commas), which proves to be a rather uninspired entrée. 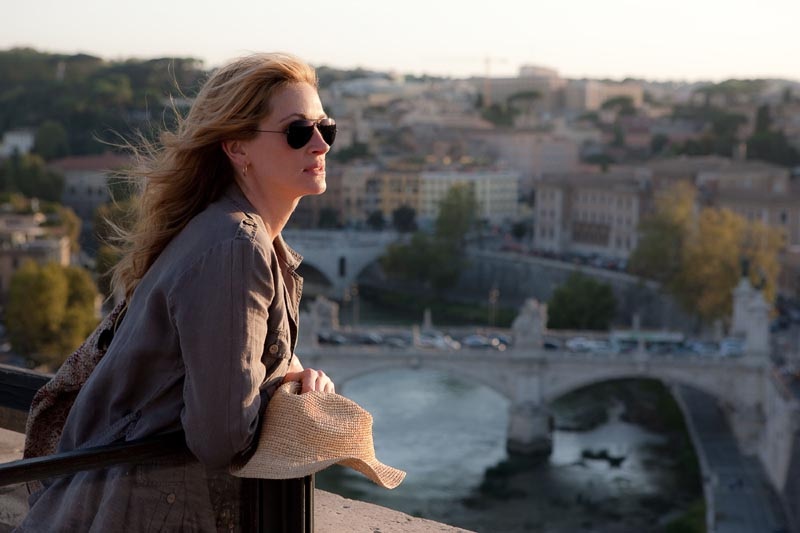 Julia Roberts portrays Gilbert, a New York-based travel writer who finds herself at the end of her rope after dissolving her marriage to a handsome dilettante (Billy Crudup) and rebounding briefly into the arms of a younger actor (James Franco). She’s having a midlife crisis — “I used to have such an appetite for life, and it’s just gone!” she wails to her publisher and best friend (Viola Davis). Her solution is to spend a year on the road, first sampling the pizza and gelato in Italy, then meditating at her ex-boyfriend’s guru’s ashram in India, and finally returning to Indonesia to re-visit a holy man (Hadi Subiyanto) who once told her fortune and predicted her return.

Director/co-writer Ryan Murphy has created ramshackle, shocking, and (at their best) delightfully subversive TV shows such as Glee and Nip/Tuck. That’s why I’m so surprised that his two movies, this one and 2006’s Running With Scissors, have been such conventional and overwrought adaptations of literary memoirs. The script by Murphy and Jennifer Salt captures Gilbert’s blinkered self-absorption, but it leaves out the book’s leavening self-deprecatory wit and reduces her spiritual insights to fortune-cookie platitudes. Liz’ encounter with the man Gilbert calls Richard from Texas (Richard Jenkins) is poorly handled, and the scene in which he reveals why he’s in India comes off as obnoxious soap opera. It’s beyond even the estimable Jenkins’ powers to save.

This 140-minute affair is lusciously photographed by cinematographer Robert Richardson — this may be the prettiest movie of the year. Yet it’s all about as dramatically engrossing as a couple of hours spent watching the Food Channel. The only time the movie sparks to life is the magnificently played climactic scene on a beach, when Liz pulls back from Felipe (Javier Bardem), the raffish Brazilian expat who’s fallen for her. The naked terror in Roberts’ eyes speaks volumes: This woman isn’t just afraid of getting hurt again. She’s afraid that embarking on another relationship will mean that her whole spiritual quest has been for nothing. This is a great movie moment. If only the rest of the film had lived up to that.