I used to live in Arizona, so I remember Pat Tillman wreaking havoc on the football field for Arizona State University. After going on to do the same for the NFL team then called the Phoenix Cardinals, the hard-hitting strong safety famously walked away from that high-salaried job to become an Army Ranger. Cpl. Tillman was killed in action in Afghanistan on April 22, 2004, and promoted as a war hero until everything came to light about what the U.S. Army had done to conceal the truth about his death. For all that, it’s only after seeing The Tillman Story, the best documentary film I’ve seen so far this year, that I get a sense of who he truly was. 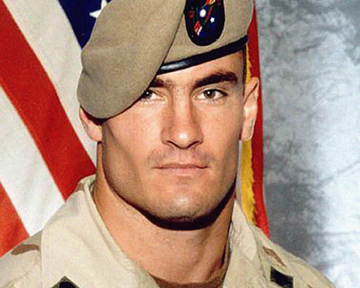 Looking back, it’s clear that Tillman’s fame as a football player was the toxic element that turned this into one of the Army’s scummier recent episodes. Had he been a janitor or a poet or a computer systems analyst in his civilian life, the military might have been more up front about the circumstances surrounding his death. Instead, when faced with the friendly-fire death of their most famous enlistee in decades, the Army made the understandable but reprehensible decision to boost public support for the war by spinning the incident into a story of heroism and valor. In doing so, they trampled all over the truth. Unluckily for them, the truth was exactly what the grieving Tillman family wanted.

Pursuing the truth, elusive as it often is, is what seems to motivate documentarian Amir Bar-Lev, whose 2007 debut film My Kid Could Paint That waded into an art-world controversy and cast doubts on the genuineness of the paintings being produced by a 4-year-old prodigy. In this movie he follows the same paper trail that the Tillman family, chiefly his mother Dannie, followed in trying to determine what happened to Pat in Afghanistan. One of the movie’s few comic ironies is that despite her massive efforts to trigger an official investigation into Pat’s death, it was the legal language in Patrick Tillman Sr.’s angry, dashed-off letter (last sentence: “In sum: Fuck you and yours.”) that set the bureaucracy in motion.

What Bar-Lev and the Tillmans reveal is a chain of command running to cover their own asses. Gen. Stanley McChrystal, until recently the commander of U.S. forces in Afghanistan, emerges as the author of a memo written immediately after Cpl. Tillman’s death telling the White House and top Army brass how to avoid the PR fallout. As the Tillman family continued its quest to hold the right people accountable, the Army tried to appease them by publicly censuring a retired three-star lieutenant general and former head of Army Special Operations Command. That wasn’t where the blame belonged, though. The movie uncovers strong circumstantial evidence that President George W. Bush and Defense Secretary Donald Rumsfeld were briefed about the details of the incident but went along with the cover-up.

For all of the movie’s focus on the higher-ups, my mind keeps running back to the soldiers who actually killed Tillman. As far as investigators can tell, this wasn’t a case of mistaken identity or a stray shot. It was a case of some guys who were so geeked up about seeing their first combat action that they maintained their fire on Tillman from 40 yards away while he screamed, “I’m Pat fucking Tillman! Why are you shooting at me?” I wonder how those guys sleep at night.

It takes courage to face enemy fire on the battlefield, but it takes another type of courage to stand up in a room and admit to having lied to people, and it’s possible to act like a hero in one venue and like a coward in the other. That point is driven home powerfully in this film’s climactic sequence during the 2007 congressional hearings on Tillman’s death. News footage offers up the thoroughly disgraceful sight of Rumsfeld and five-star generals hiding behind their lawyers, fudging the truth, and liberally using the legalism “I don’t recall.”

That contrasts sharply with the conduct of not only Pat Tillman — who comes across as an upstanding young man with more on his mind than we usually credit millionaire athletes with — but also his free-swearing California family. The title of this movie was supposed to be a quotation of Pat’s last words (the MPAA said no), but The Tillman Story is an even better title because his parents, brothers, and wife are as much a part of this story as he is. They could have simply taken the Army’s word about what happened to Pat, and even if someone had told them about what really happened, no one would have blamed them for finding the subject too painful and accepting the glowing tributes and posthumous honors bestowed upon their son. Instead, the Tillmans wanted to set the record straight, and their unwavering commitment to the truth is what makes this film so moving. The politicians and generals are enough to make you ashamed to be an American. The Tillmans will make you proud.