Ya’Ke is a Swahili word meaning “son of God, great warrior.” That English translation is tattooed on the right shoulder of Dwain Ya’Ke Smith (one of several pieces of body art that he sports), who uses his middle name alone when he’s making films. The 29-year-old San Antonio native has already notched some glittering achievements in his budding filmmaking career, one that has now brought him to the University of Texas at Arlington, where he’s been teaching film for the past year. 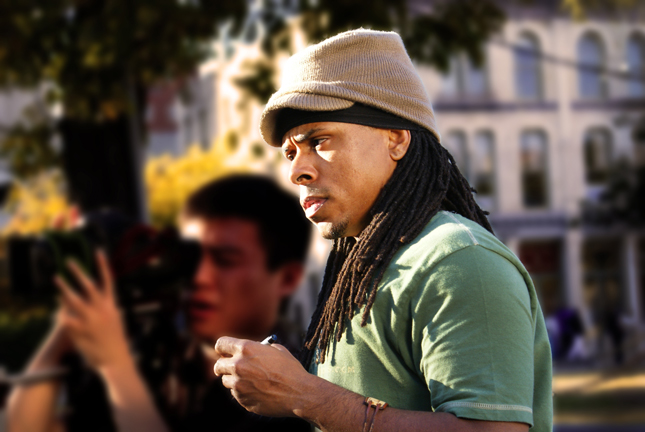 Though Ya’Ke once dreamed of acting, he credits John Singleton’s Boyz N the Hood, which he saw at age 11, with turning him toward filmmaking. “I lived in neighborhoods like those,” he remembered. “I saw the effect that the movie had on the people around me, made them think about the way they were living their lives. I wanted to have that same kind of effect.” He started making films at age 15 with similarly movie-obsessed fellow high-school student Ralph Lopez. Through their production company Exodus Filmworks, Lopez has produced all Ya’Ke’s films since then, and the filmmaker warmly describes him as “my right-hand man.”

One highlight was his short film Hope’s War, which screened at the 2006 Cannes International Film Festival, a heady achievement for someone who hadn’t yet graduated from the University of Texas film school. “It was amazing to meet other artists and talk to people with different vantage points,” he said. His film, about an American soldier struggling to adjust to life back at home, shared the bill with the German film The Runaway, which went on to be nominated for an Oscar. “We had a full house,” Ya’Ke recalled. “It was exhilarating.”

He started teaching at the University of Texas as a lecturer, but he came to UTA for the chance to be a tenure-track professor. “It’s much smaller and more intimate,” he said of the film program in Arlington. Some of his students snag jobs on the sets of his movies. “I can use my projects as an extension of the classroom,” he said. “My students watch me on the set and learn. It’s great to have them there.”

He hasn’t yet filmed anything in this area, though he says he definitely wants to — he’s still getting a sense of North Texas and looking for the right story. He’s also seeking an apartment closer to campus with his wife Mikala Gibson, a frequent presence in his films who recently co-starred in Jubilee Theatre’s Gem of the Ocean.

Ya’Ke is currently making a short film for Bill White’s gubernatorial campaign web site, set to premiere next month. Meanwhile, his short film Katrina’s Son just won a tiny but important grant — $275 from Texas Filmmakers for the cost of DVD copies to be sent to film festivals, an expense that he estimates can be 10 percent of a film’s budget. The film, about an 11-year-old boy from New Orleans (played by Herman Whitney III) trying to reunite with his mother in San Antonio after the hurricane, is scheduled to play at the upcoming Dallas Video Fest. Ya’Ke gives Whitney credit for the film’s success. Ya’Ke’s plans for a feature version of Katrina’s Son (with a different title and an older protagonist) hinge on finding the right actor.

“I started out wanting to be the boss,” he said of his approach to his job. “But a big part of filmmaking is finding people you can trust who can take your vision and run with it.”