The fourth Resident Evil game was a thrilling reinvention of the series, ditching zombies for more unusual monsters. It also was a fast-paced story full of scares and memorable characters. Unfortunately, the same can’t be said of the fourth movie, Resident Evil: Afterlife, because, honestly, if you’ve ever seen a zombie movie, you’ve seen this one, and you’ve probably seen better. 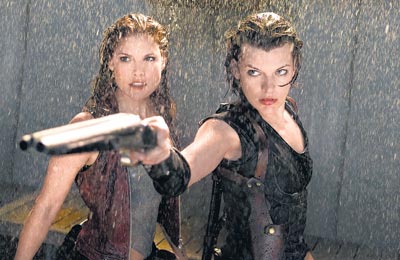 The movie begins with Alice (Milla Jovovich) powered up with an army of Alice clones after the end of 2007’s Resident Evil: Extinction, going after the Umbrella Organization, still reasonably well staffed despite the zombie apocalypse. After an action scene at Umbrella’s Tokyo base, Alice finds herself de-powered by bad guy Wesker (Shawn Roberts) and on the search for more survivors. She hears a radio message about Arcadia, a supposed zombie-free place. She eventually winds up in a prison in Los Angeles, where some surprisingly well-groomed survivors have holed up, and decides to help them reach Arcadia.

The main problem with the movie becomes apparent once Alice reaches L.A.: Resident Evil: Afterlife is just another zombie flick, only with more slow-motion sequences than a Zack Snyder film. But none of the zombie-slaying action is very inventive or thrilling, so the flick’s unlikely to satisfy the connoisseur of the undead. What’s worse is that after Alice became cloned and super-powered at the end of the last film, something unique could’ve been done with the premise for this one. Alas …

Another major problem is the complete lack of suspense. You know who survives and rarely feel the main characters are in any danger. The endless slow-mo saps a lot of suspense as well. The only remarkable scene is the battle with the ax-wielding executioner in the prison shower, which also gives us a gratuitous shot of a soaking-wet Ali Larter. Worse still is that it’s obvious the main thrust of the movie’s story is in Arcadia, so the entire time devoted to the prison –– the majority of the movie –– is spent waiting for the characters to escape to something more interesting.

The cast does a decent job but nothing outstanding. Jovovich can look pretty and determined with the best of them, same for Larter, and Miller adds a little intensity as game series protagonist Chris Redfield. Roberts has the most fun as the big bad Wesker, channeling the monotone of The Matrix’s Agent Smith with ample smugness. He doesn’t get enough screen time, though. As for the 3D, it’s your usual throw-stuff-at-the-camera affair.

The movie isn’t terrible, just mediocre. Fans of the games will feel that characters like Chris and Wesker were added only to give the movie a tenuous connection to the source material. Considering the cost of going to 3D movies, you could buy one of the previous games for the price of two tickets and have a much better time in the comfort of your home.