After all this time, after having his private life extensively dragged through the tabloids by a series of high-profile romances, after becoming a pop culture punching bag, after starring in Gigli for God’s sake, what if Ben Affleck turned out to be a major filmmaker-in-waiting all along? After seeing The Town, his excellent second effort as a director, this mind-blowing possibility is now in play. Wouldn’t that just be something? 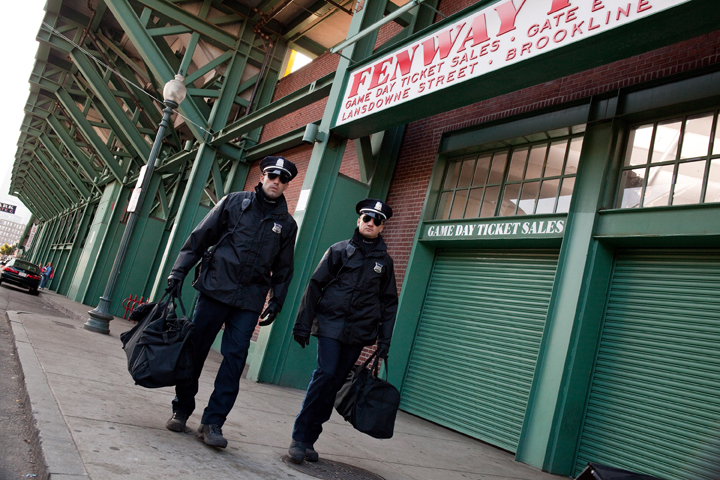 The Town is certainly something. The title of this crime epic refers to Charlestown, the blue-collar neighborhood of Boston that in real life has been home to a disproportionate number of bank robbers. Affleck stars as one of these, one Doug MacRay, the brains behind a Halloween mask-wearing crew of successful thieves, though he’s content to let his thuggish best friend Jem (The Hurt Locker’s Jeremy Renner) act as the ringleader.

The movie is based on Chuck Hogan’s 2004 novel Prince of Thieves, a decent thriller that Affleck and his two co-writers nevertheless improve on considerably. The book’s conveniently coinciding romantic plots are whittled down to one, the author’s maundering over the gentrification of Boston is dispensed with, and the supporting characters are either dropped or sharpened to a fine point. The latter is especially true of the FBI agent trying to bring down Doug’s crew, who’s turned into a nasty piece of work willing to trample people to catch the bad guys. (Jon Hamm practically glistens with meanness in this role.)

Even the romantic subplot comes fraught with peril, as Doug falls for Claire (Rebecca Hall), a bank manager who’s taken hostage during a heist. He initially cozies up to her after the job is over to determine if she’s talking to the feds, but the unsuspecting Claire convinces him that he needs to stop robbing banks. This section is reminiscent of the romantic comedies that Affleck has occasionally starred in, and while his acting hasn’t been at its strongest in those films, his experience with them pays off here. Some of the lines are a bit heavy-handed, but the banter is edged with Doug’s ulterior motivations, and there’s a crackling scene at a café where Jem suddenly materializes at Doug and Claire’s table and threatens to blow Doug’s cover.

As you might expect, Affleck handles his fellow actors skillfully. Both Hall and Renner make effective physical contrasts with the lead actor, and both contribute in different ways to the movie’s coiling tension. Pete Postlethwaite is memorably brutish as a wizened Irish mob kingpin. The exception is Blake Lively as Doug’s hard-partying drug mule of an ex-girlfriend; the 24-year-old Gossip Girl star gives it her best, but she’s too young and fresh-faced to pull off a character this blowsy. That weird piece of miscasting is more than made up for by Affleck’s performance in the lead role, which suits him well enough that this movie avoids coming off like a vanity project. Doug is a recovering alcoholic who knows that he threw away a promising hockey career, and Affleck has always been good at projecting that kind of disappointment and self-loathing. He’s at his most charming when he’s able to laugh at those qualities, and he’s able to do so here. Not many filmmakers can give themselves the most rewarding acting roles of their lives.

In addition, the director neatly incorporates comic relief into the framework of a serious drama — check the terrific visual gag at the end of a car chase. The action is largely confined to three remarkable set pieces: a crisply executed bank heist at the beginning, an armored truck job midway through that turns into a complex car chase after a security guard tries to play hero, and a massive climactic shootout at Fenway Park. These are all filmed with assurance and style, and the shootout manages to rack up a ton of damage while unfolding in a natural way. (Contrast this with Michael Bay’s films and their “watch me blow stuff up” approach.) Affleck also fiddles with the audio to good effect, with muffled dialogue and music depicting the feds’ point of view as they monitor the crooks from afar or a high-pitched hum as the robbers are temporarily deafened by a stun grenade. Three years after Affleck’s accomplished directorial debut Gone Baby Gone, this tauter and smoother film shows him learning his craft very quickly.

Even more encouraging is the way Affleck balances his technical skills with human elements, paying as much attention to character development and performance as he does to giving the audience a thrill ride. This is Michael Mann territory, and Affleck looks completely at home on it. That’s a huge development. Most moviegoers have lived through the past 13 years without ever asking, “What will Ben Affleck do next?” It’s time to start.