Here’s an example of overthinking. Oliver Stone’s sequel to his 1987 hit Wall Street is entitled Wall Street: Money Never Sleeps. The subtitle refers to a line by Gordon Gekko (Michael Douglas) in the original, which the sequel expands into a speech comparing money to a fickle, emotionally unstable woman who’ll leave if she’s not paid enough attention. 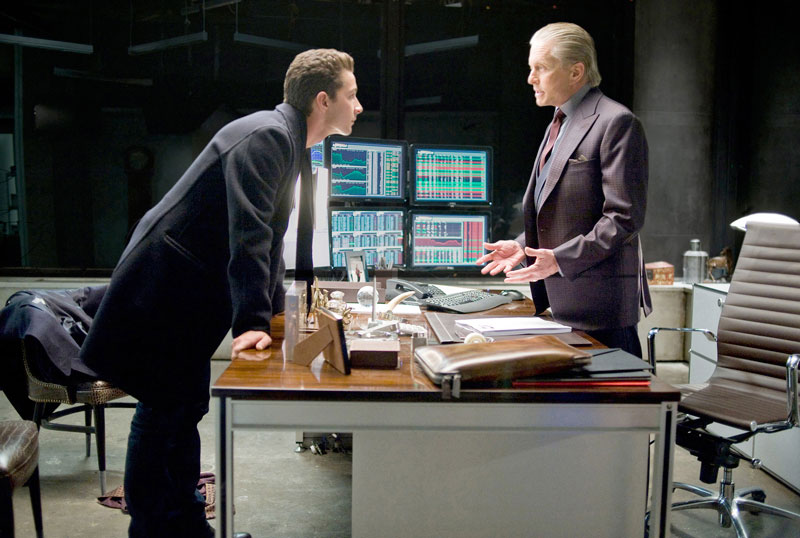 That speech isn’t out of character, but that doesn’t make the metaphor any less tinny or the title sound less dopey. The powers that be should have gone the more conventional route and subtitled this movie Gordon Gekko Returns or The Revenge of Gordon Gekko. I would’ve paid to see that.

That’s a testament to the staying power of the Mammonite figure who infamously told us how good greed was. His words captured the ravenous spirit of the flush economic times that produced him. Now that times have gotten tough, it’s good to turn loose a much older and chastened version of him in a recession. The result doesn’t tap into the zeitgeist the way the original film did, but it’s decent entertainment value all the same.

The sequel begins in the early months of 2008, with working-class Long Island product Jake Moore (Shia LaBeouf) employed as an energy analyst for an investment bank, looking to fund the eco-friendly alternative fuel that’ll power the future. When a corporate raid by rival banker Bretton James (Josh Brolin) sinks Jake’s firm and drives his beloved mentor (Frank Langella) to suicide, Jake strikes back with a whisper campaign that causes a stock spiral, inflicting a nine-figure loss on Bretton. This piece of vengeance actually impresses Bretton, who offers Jake a job at his own firm with more power, more perks, and more peril.

The film usefully reminds us that LaBeouf is a rather good actor, a fact that you may have forgotten between Transformers movies. Jake is full of contradictions, a guy who wants to save the world but also wants to make billions doing it, and a methodically vindictive operator who’s also capable of great tenderness. (One of the movie’s most affecting moments is early on, when Jake’s happiness at his mentor’s recognition moves him to kiss the old man’s bald head.) With his steely intelligence and determination peeking out from behind his prepubescent features, LaBeouf embodies all these different strains and makes it look easy. The actor’s skinny frame can work against him in a setting like this, but when Jake threatens superwealthy people with financial ruin, you believe he’s smart and ruthless enough to make it happen.

It’s too bad that this characterization is undercut by the other plot, in which Jake seeks out Gordon’s advice about dealing with Bretton. After a prison stint, the former Wall Street king is now a private citizen railing against the evils of leveraged debt (in a published memoir entitled Is Greed Good? — hee!) before the ensuing financial meltdown makes him look like a genius. Gordon also happens to be the estranged father of Winnie (Carey Mulligan), Jake’s lefty news blogger fiancée. In exchange for his counsel, all Gordon asks of Jake is a reconciliation with his daughter. Of course, no deal with Gordon is that simple, and as sharp as Jake is, it’s hard to believe that he’d be roped in by a scheme of Gordon’s that’s more transparently crooked than a Nigerian prince’s e-mail.

In typical Oliver Stone fashion, the Gekko family drama is dealt with in patches of bad writing, preachiness, and cheap sentiment; the tearful scene between Gordon and Winnie over her dead brother is a low point. The women are largely sidelined, and Mulligan does little except make wounded faces and work on her (pretty good by now) American accent. As for the director’s metaphors, there are symbolic shots of soap bubbles and falling dominoes. You’ve been warned.

As with the original, Stone immerses us in the environment by tossing all sorts of financial jargon at us without caring whether we keep up. This respect for the audience’s intelligence is gratifying, as is the expensively appointed supporting cast. The director throws us a bone by arranging a reunion between Gordon and former protégé Bud Fox (Charlie Sheen), but the real red meat comes from Eli Wallach as the founding partner of Bretton’s firm, a guy old enough to remember the Great Depression yet fierce enough to smack down an underling who steps out of line. With a scene-stealing habit of punctuating his dialogue with emphatic whistles, the 94-year-old Wallach proves he can still bring serious heat.

While Douglas did better in a similar role in the recent Solitary Man, his late-career assurance is good to have on hand. He doesn’t coast in portraying a more introspective financier who doesn’t pity himself in the face of tragedy and hasn’t gone soft but who also doesn’t mind gaming people by giving off the impression that he might have. Age, disgrace, and the loss of his fortune bring Gordon Gekko down to our level, and in the way that he scrapes by, we can see that the old trickster is like the rest of us.