Live-action filmmakers have been getting into animation lately, but only the ones who have a strongly developed and distinctive cinematic style (like Tim Burton or Wes Anderson) have found it worth the trouble. That’s what Zack Snyder is attempting in Legend of the Guardians: The Owls of Ga’Hoole.


The director manages to make this fable into a film that combines fine visual detail with operatic sweep and action sequences, much like his live-action thrillers 300 and Watchmen. Also like those movies, this one isn’t an unqualified success, but it is fairly interesting. 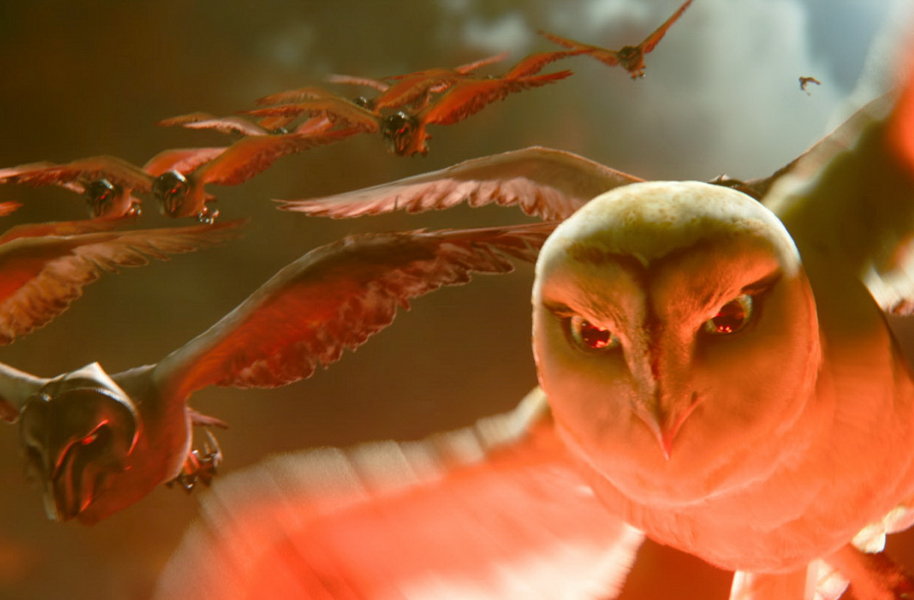 Based on Kathryn Lasky’s series of novels Guardians of Ga’Hoole, the movie begins with barn owlet siblings Soren and Kludd (voiced by Jim Sturgess and Ryan Kwanten) who haven’t yet learned how to fly. When they fall out of their tree, they’re carried off by some militaristic owls who ominously call themselves the Pure Ones and want to stage a fascist takeover of the owl kingdom. While Kludd embraces the cause wholeheartedly, Soren escapes from the fold with a terrified elf owl (voiced by Emily Barclay) and goes searching for the Guardians, the legendary protectors of truth and light who can fight off the Pure Ones.

I suspect the film looks as spectacular in two dimensions as it does in three, which is how I saw it. There’s a sequence with Soren taking advanced flying lessons during a rainstorm in which you can follow every drop of water and every feather on the birds, and it’s all very Zack Snyder. The largely Australian voice cast (including Geoffrey Rush, Anthony LaPaglia, Sam Neill, and the non-Aussie Helen Mirren as the Lady Macbeth of the Pure Ones) works in their own accents and tears through their roles with great aplomb. The subplot with Kludd boasts some sharp writing about how cults and terrorist organizations recruit their followers by doling out appreciation to frustrated losers.

I can pinpoint exactly when this movie loses its mojo, though. It’s the musical montage about two-thirds of the way through set to “To the Sky,” a new song by Adam Young, known professionally as Owl City. The filmmakers probably couldn’t resist putting an artist called Owl City on the soundtrack of a movie about owls (just like the last Twilight movie used Vampire Weekend), but the song’s emo-acoustic guitar strumming and the canned inspirational clichés in the lyrics conspire to kill the grand-quest atmosphere. The movie never regains its stride, with reluctant warrior Soren somehow doing so much during the climactic battle that he practically wins it single-handedly.

That’s regrettable, but Legend of the Guardians takes itself more or less seriously and largely avoids the cutesiness that could have easily curdled this film. The action sequences are slightly more hard-core than the ones in How to Train Your Dragon, and the mythology is dense enough to support a sequel or maybe even two. For family entertainment, you could do a lot worse.

Legend of the Guardians: The Owls of Ga’Hoole