Back again, readers? Come on in. We’ve saved a chair for you at the table. Hors d’oeuvres are up, the game is afoot, there’s beer in the cooler, and you still have time to place your bets. 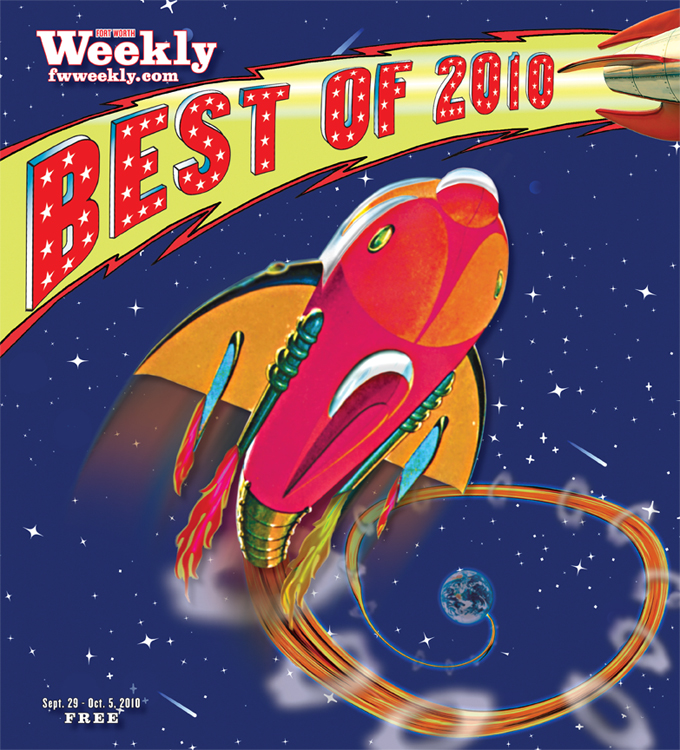 Bets, you say? Is that a bookie on the phone? Nah, we’re not talking about football or the ponies. This isn’t Derby Day, and, no, officer, we don’t have an office pool going on the Horned Frogs.

The wager here is on something more important: What is Fort Worth going to look like in the next … well, let’s say 50 years. Will we be a Dallas clone? A gridlocked, cookie-cutter Levittown? Or maybe a Southern version of Detroit, our once-powerful civic future compromised by an army of Trojan gas rigs that, once invited in, turned our city into a swamp of fouled groundwater, depressed property values, and abandoned industrial sites?

Or maybe we won’t be any of those things. This is where the betting gets interesting. Because last year in this space, we invited our readers to join a wide-ranging, hard-to-pin-down revolution, of greening Fort Worth, making our urban spaces work better, acting in ways that benefit both the economy and planet, and standing up and complaining when government doesn’t also do those things –– or as we said then, “when necessary, leaving [a] metaphoric footprint on some public officials’ behinds.”

Well, don’t look now (and we sure don’t take credit), but there are a lot of folks around here with their boots on. This isn’t the Tea Party, and we’re not trying to fire up people to “take back America.” (From what? Democracy and observance of the Constitution?) It may be a “take back Fort Worth” shindig, though.

Local neighborhood leaders are standing up against excesses at city hall, local citizens are filing ethics complaints, local environmental groups have won some important victories, the EPA is again doing its best to protect our air and water against pollution, and even the state environmental watchdog agencies are being goaded into action. There are whistleblowers on the loose at the Fort Worth school district, pointing out clothes-less emperors right and left. Tarrant County College has a new board majority determined to stop and, as much as possible, reverse the excesses of their predecessors. Wow. What a year.

Along the way, Fort Worth has also made strides in turning itself into a collection of lively, walkable, breathable urban villages. We’ve got one of the finest restaurant rows in Texas still a-growing along West Magnolia Avenue. In the West 7th Street corridor, there’s a more chain-heavy, Dallas-ized version of the same thing developing but still with plenty of local touches and with the huge benefit of putting thousands of condo and apartment residents within walking distance of everything from clothes to groceries. There’s an environmentally unique new headquarters for the Botanic Research Institute of Texas going up on University Drive and a new museum open in the Cultural District. Fort Worth also seems to be taking the increasing diversity of its populace in stride –– check out our list of top taquerias, for instance, and count how many are not on the North Side.

This is how things work in cities: Some wonderful things are cherished, strengthened, and saved while others fade away. Some bad things get cleaned up, but others just burrow deeper. These days, we have fewer independent coffee shops, book stores, and record shops, but many exciting new clubs, restaurants, and public art pieces. So let’s celebrate and patronize the independent places we’ve got — and the independent thinkers, chefs, musicmakers, artists, kickers of hornets’ nests, and challengers of the status quo.

We’ve tried to round up the best in Tarrant County in a lot of those categories for you here. As usual, in our balloting, there were a few categories in which there were no clear winners and so no readers’ choices to report. And as always, this mammoth issue could not have landed (with a thump) without the hard work and help of our staff writers and editors, freelance writers and photographers, production folks, ad salesfolk, ballot counters, interns, and a lot of you Out There. This rocket ship is scheduling departures daily for the future (or maybe, many futures). We’re glad to be on the launch pad and that you’re here with us. — Gayle Reaves

To see the winners in the following categories, click the links below.