There are people who don’t care much for Zach Galifianakis. They look at the 41-year-old standup comic — either on stage or in films like The Hangover and Dinner for Schmucks — and see a bearded slob doing cringe-worthy but otherwise typical fat-guy shtick. Those people will likely be diving for cover at the idea of him playing a suicidal mental patient, which is what he does in It’s Kind of a Funny Story. They should see this film, in which he tones down his approach considerably and gives a remarkably subtle performance. 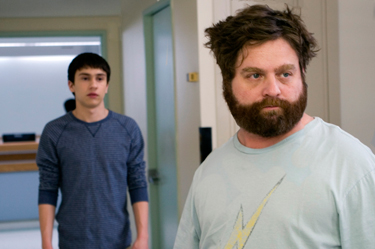 By the same token, there are also people who think Galifianakis is the funniest guy in the world and find him hysterical. Those people should also see him here, because even though the character is primarily presented in a more or less straightforward fashion, the role still allows the actor to use his comedic skills. Either way, he’s the best thing, by miles, in this slight coming-of-age-with-mental-illness movie.

The movie stars Keir Gilchrist (best known from TV’s United States of Tara) as Craig Gilner, a 16-year-old kid who’s being pushed on a track toward business school that he doesn’t particularly care for. Feeling overwhelmed and stressed out, Craig harbors some worryingly suicidal thoughts that lead him to check himself into a mental hospital in Brooklyn. With five days of nothing to do except be observed by the doctors, he becomes caught up in the life of the place and its denizens, including Bobby (Galifianakis), who’s dressed like a doctor when he first meets Craig in the ER.

This is the third film by Anna Boden and Ryan Fleck, the indie-cinema writing-directing team who directed Ryan Gosling to an Oscar nomination in the addiction drama Half Nelson and then turned out last year’s brilliant baseball movie Sugar. This is their bid for mainstream recognition, with a bigger budget and bigger stars (including Viola Davis as Craig’s therapist and Lauren Graham as his mom) than they’ve ever had to work with. In marked contrast with their previous films’ unvarnished realism, Boden and Fleck pepper this movie with fantasy and dream sequences, the most notable one arriving about an hour in when Craig’s music therapy session turns into a full-fledged musical number set to David Bowie and Queen’s “Under Pressure,” with he and his fellow inmates transformed into members of a glam-rock band. These sequences are perhaps necessary for demonstrating the manic workings of Craig’s mind, but they’re disappointingly conventional, never soaring with imaginative flight. Boden and Fleck don’t seem comfortable working in this vein.

The movie is based on a novel by Ned Vizzini, who wrote the book in a four-week burst shortly after completing a five-day stay in a psych ward. It’s understandable that both the author and the filmmakers wanted to tell a story about depression in a light and funny way, but the movie (more so than the book) ends up unwittingly trivializing mental illness. Like many teenagers, Craig makes more of his psychological issues than there really is, and he quickly realizes that his own problems are small potatoes next to the woes of some other inmates. That would be great, except that nobody else in this hospital seems all that sick. The bevy of inmates — a paranoid germ-phobic African-American professor (Novella Nelson), an Orthodox Jewish acid casualty (Daniel London), an Egyptian guy who won’t leave his room (Bernard White) — exist more or less as sitcom characters hovering in the background, waiting to say something crazy.

The same shallowness mars the movie’s romantic subplot, in which Craig falls for a self-mutilator in the ward named Noelle (Emma Roberts). The two actors have some chemistry, but the movie entirely glosses over the character’s massive self-esteem deficit. All Craig has to do is tell Noelle that she’s beautiful, and she’s as good as cured. Roberts doesn’t have sufficient inner storm clouds to portray a pretty girl who thinks she’s hideously ugly, and even though she has never been more charming onscreen, her charm perversely works against her in this role.

Galifianakis gives It’s Kind of a Funny Story its modicum of depth, and he’d be valuable to the film even if his contributions were limited to comic relief. Instead, in the subplot in which Bobby borrows a shirt from Craig, we see the character’s lack of ease dealing with the world outside the institution. Elsewhere we sense Bobby’s attitude toward his illness and regaining custody of his young daughter, which veers from weary defeated resignation to — in one furniture-smashing outburst — wild despair. We’ve seen other manic comedians like Robin Williams and Jack Black play dramatic roles like this. What distinguishes Galifianakis is how easily he slips into this character who recognizes his condition’s intractability but nevertheless retains his ability to laugh at it. If only the movie had found the same balance.

It’s Kind of a Funny Story