Katherine Heigl is famous, in part, for dissing the TV show and movie that made her famous. She notoriously withdrew an acting Emmy bid for Grey’s Anatomy because she thought the writing for that season was subpar. She complained that Judd Apatow’s Knocked Up was slightly misogynistic and saddled her with a humorless role. (Knocked Up indeed sucked but not for the reasons Heigl gave.)

Now with an executive producer credit on the rom-com Life As We Know It, Heigl has no one else to blame for the shitty material in which she is currently stranded. She midwifed this preposterous tale of a caterer (Heigl) and a sports broadcast director (Josh Duhamel, a.k.a. the poor man’s Peter Krause) who fall in love after they’re coerced into raising a baby together: Their best friends –– a married couple killed in a tragic but vaguely explained accident –– improbably award joint custody of the surviving kid to these two constant bickerers. This bloated exercise in contrived domesticity doesn’t so much play to Heigl’s fan base as ambush them into swallowing more Heigl worship than the most devoted could even stomach. 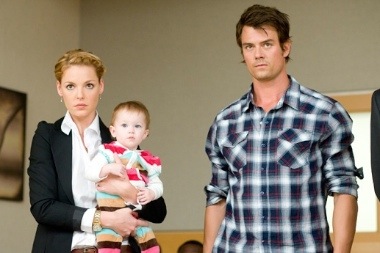 Life As We Know It is too long, too busy, and too predictable to even qualify as flawed fun. Playing career professionals with little interest in parenting –– and even less romantic interest in each other –– Heigl and Duhamel demonstrate a basic knowledge of feeding, diapering, and entertaining an infant that borders on criminal neglect. (Greenberg’s Ben Stiller and Greta Gerwig would’ve made exemplary parents compared with these boneheads.) Their extreme ineptitude as nurturers hurtles them toward romantic bliss, although a hard-nosed social worker (Chanta Rivers) and a rival interest for Heigl (Josh Lucas) briefly pop up as fake complications.

Powerhouse TV producer Greg Berlanti (Everwood, Brothers & Sisters) was tapped to direct Life As We Know It, even though the only feature film he’d previously helmed was a decade ago (2000’s mediocre gay comedy The Broken Hearts Club). His lack of experience shows all over the screen, from the jarring mood shifts between comedy and drama to the distracting cinematography by Andrew Dunn that showcases the whole limping affair in the gauzy sunlit tones of a House Beautiful layout. (Heigl and Duhamel are inexplicably forced to live in the same gorgeous Atlanta home while they raise the baby.)

And about that baby. She is played by a trio of sibling actors, so I’m not sure who deserves the credit for puking, pooping, and giggling on cue. The canned cuteness of those performances is emblematic of the whole weird mess that is Life As We Know It. Who’d have guessed that when executive producer-star Katherine Heigl went looking for inspiration, she’d be dazzled by 1987’s Three Men and a Baby?

Life As We Know It