Ray’s Prime Steakhouse & Seafood recently took over the space formerly occupied by Aventino, the Italian eatery that resided in that little corner of Camp Bowie Boulevard and Winthrop Avenue for decades. Ray’s owner, Raif Jumera (who also owns Fortuna Italian Restaurant up the street), turned the interior back into what it looked like before Aventino’s extremely chic makeover. This isn’t really a positive.


The dining room’s sleek ’70s-era mod chairs don’t match the ornate carpet, which doesn’t pair well with the rustic Texana wall décor. Although the walls went well with the country music playing during a recent evening visit, nothing matched the giant pastoral oil painting hanging on the wall that leads to the kitchen. The place now looks outdated and a little odd for a new Fort Worth eatery. 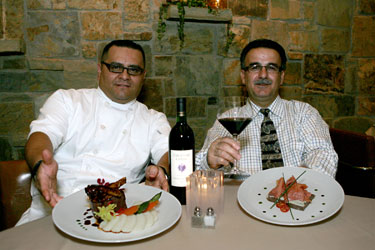 But none of that really matters, because the food at Ray’s was absolutely tremendous. Whatever the décor lacks has more than been made up for in the kitchen. The lump crab cake featured a generous portion of crab, bound together with a little creamy dressing and more crab, not breaded filler. Although the cakes had a little too much minced red pepper, the puddle of mustard-infused citrus broth in which they sat and dainty edible flowers made the dish taste –– and look –– over-the-top good. Almost as pleasing was the simple caprese salad: just quartered red and orange heirloom tomatoes, a few drizzles of pesto and olive oil, and a little chiffonade of basil atop the freshest, most luxurious, softest mozzarella cheese ever.

Ray’s menu offers a generous selection of beef, fish, and fowl. There are some interesting items, like the chicken with lobster and pan-roasted duck a l’orange –– fairly rare occurrences on a Fort Worth menu. The grilled scallops were amazing: four giant scallops seared to perfection on the outside, still creamy-white on the inside, and resting atop decadently rich, cheesy corn risotto. The chef managed to etch grill marks on the outside of the scallops and cook the tricky bivalves all the way through without turning the delicate flesh to the consistency of pencil eraser. There was something wondrous about the combination of the fresh corn, scallops, and the pungent cheese used to bind the risotto.

The filet mignon Bourguignon is somewhat inelegantly described on the menu as “wine mushroom stew,” which doesn’t begin to do the dish justice. The rich, savory burgundy reduction was complemented with tart cherries, and the fork-tender beef came out flawlessly medium, as requested. The meat was served with creamy rosemary mashed potatoes, which were just the perfect vehicle for sopping up the sumptuous red wine sauce. Since both entrées came with a generous side of starch, the additional sautéed asparagus and caesar salad were unnecessary though tasty add-ons. The caesar dressing in particular was tartly creamy with the flavor of anchovies (though the little fishies themselves did not make an appearance).

The main flaw of the meal was the inattentive service. We had to ask about evening specials, and our server didn’t seem interested in trying to sell us dessert (a server at another table was overheard saying something about crème brûlée) or doing much above simply bringing us what was convenient to her. So we left without dessert. Additionally, the service could politely be described as “paced,” which was peculiar, considering that the restaurant was less than half full.

Ray’s is open only for dinner, so perhaps Jumera has learned something from the demise of Aventino (as well as Duce and Fuego up the street). Flashy may not work on that stretch of Camp Bowie. There’s perhaps not enough foot traffic to sustain any lunch options costing more than $6.99 or that take an hour to order and consume –– only dinner in that part of the West Side seems to work. And the neighborhood also seems to prefer substance over flamboyance. With a little polishing, Ray’s has the ingredients to really shine.