Side by side, Burt Rutherford and Tim Yager look like a mismatched comedy duo, best friends who couldn’t look any more different. The two filmmakers have known each other since attending Rowlett High School together. They laugh easily with each other and finish each other’s sentences. The thin, bespectacled, clean-cut Yager clashes with Rutherford, who has long hair, a thick beard, and a considerable gut. (He’s currently at 265 pounds.)


Yet Rutherford pulls out his iPhone and shows me pictures of himself considerably thinner and clean-shaven. The reason for his physical transformation has to do with The Model Man, the film project that they’re holding a fund-raiser for this week at Four Day Weekend Theater. 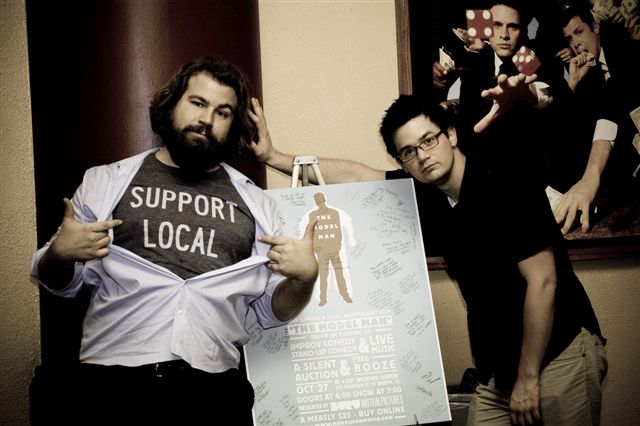 Rutherford and Yager, both 26, even played in the same marching band at Rowlett but didn’t know each other that well. After graduating from high school, both, separately, knocked around the country for a while. Rutherford dropped out of film school at both the University of Texas at Arlington and the University of North Texas, preferring to put together his own syllabus of classic and contemporary films to study to help teach himself filmmaking. Yager caught the acting bug in high school and went to Chicago to study improv comedy. The two didn’t reconnect until last year, when Yager moved back to Garland. (“Chicago is great, but I just felt this enormous pull,” he said. “I felt like I could pursue my dream just as well in Dallas.”) They found each other on Facebook and started making short films together.

The Model Man was originally supposed to be a short film about a fat man who loses weight to impress a woman, but eventually Rutherford and Yager decided to expand it into a feature. Rutherford had already started gaining weight for the role and was near 280 pounds by the time they put off the shoot. “I stopped grocery shopping and just lived off fast food,” recalled Rutherford. “I started going to my doctor once a month for checkups. I didn’t tell him about what we were doing until about six months in. That’s when he started noticing some warning signs.” He’s now maintaining his weight with medical supervision. The filmmakers plan to shoot the film’s initial scenes first, shut down for six months while Rutherford diets and exercises, then film the later scenes when his character (named Gregor in a nod to Kafka’s The Metamorphosis) becomes an underwear model.

Yager admits that the sequence of events developed because he and Rutherford underestimated the logistical challenges of making their first feature. It was while the two were filming a Doritos commercial as part of a crowdsourcing contest that they changed their plans. “We thought we could shoot on the cheap,” said Yager. “But [the commercial] made us realize that we could do something really good.” This prompted a massive rewrite of the script, not only to make it feature length but also to emphasize character and emotion while still retaining the film’s comedy elements.

While Yager is heavily involved with the newly established Dallas Comedy House, he is also teaching a comedy course at Four Day Weekend, where Rutherford is also studying. Their fund-raiser will feature live music, a silent auction, and stand-up comedy headlined by Paul Varghese. They’re busy putting the finishing touches on the screenplay while seeking local production companies to get work started. “Before all this, we couldn’t figure out why filmmakers would spend a year or three years on projects,” Rutherford said. “But now we’ve been at this for a year and a half, and we’re learning as we go. We want this to be legit.”