Hilary Swank stars in Conviction as a woman who launches a more or less single-handed assault on the legal system, and this suffocating, curiously overpraised drama provides compelling evidence of her artistic decline.

Decline from what? Well, her performance in Boys Don’t Cry (1999) was more than just a male-impersonation stunt. The glints of boyish humor and teenage ardor gave crushing tragic power to her performance and to the movie as a whole. Similar flickers of puppy-dog enthusiasm made her an invaluable counterweight in the brooding, male-dominated cop thriller Insomnia (2002), where she played an eager homicide detective who encounters evil in its most banal forms. With her unconventional looks and disinterest in traditional girly-girl roles, she seemed poised to carve out a unique career for herself. 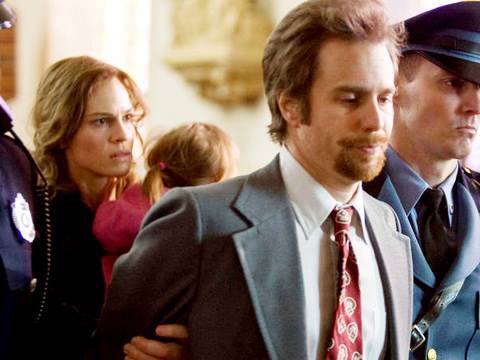 Since then, however, her second Oscar win for Million Dollar Baby (2004) has pushed her toward playing noble, heroic types usually based on real-life people. Oh, she’s tried to lighten up, but her track record in popcorn entertainment has been truly wretched (P.S. I Love You, The Reaping, The Black Dahlia, The Core). Even the heroic characters are yielding diminishing returns for her, as witnessed by last year’s Amelia, where she turned Amelia Earhart into a wooden, slogan-spouting presence. At this point, rectitude and moral outrage are the only things she can do anymore. Usually actors don’t reach that point until they’re middle-aged, but Hilary Swank has managed the trick at the tender age of 36. She’s the Greer Garson of our era. Bummer.

Like many bad movies, Conviction is based on an unlikely and inspiring true story. Betty Anne Waters was a stay-at-home mom in Massachusetts until the day in 1983 when her brother Kenny was arrested for the brutal armed robbery and murder of a neighbor. When he was convicted, she resolved to become a lawyer and fight for him, even though she hadn’t so much as completed high school. It took her 16 years and cost her a marriage, but by the time she earned her law degree, advances in DNA testing and criminal science allowed her to prove Kenny’s innocence. With the help of New York-based lawyer Barry Scheck (also a key figure in the O.J. Simpson murder case), she freed her brother by exposing a trail of false witness testimony and police intimidation.

Director Tony Goldwyn brings the same thudding earnestness to this project that characterizes the infrequent other films that he has helmed (The Last Kiss, A Walk on the Moon). Those films may have been dull, but this one is dull and sloppy. Betty Anne’s college years go by in a blink, her two sons grow from babies into teenagers without much fuss, and no sooner does her husband (Loren Dean) marry her than he seems to want a divorce. If the movie had been three hours long, all these considerations might have been given their due, and Betty Anne’s ultimate triumph would feel more hard-won. Yet that still wouldn’t do anything for the confusing flashbacks and flash-forwards, clumsy character introductions, or subplots forgotten for long stretches. It’s enough to make you wonder if an editor worked on this movie at all.

Goldwyn comes from an acting background, so we shouldn’t be surprised that he gives the lion’s share of his attention to the acting. Most notably, he’s surrounded his star with three other Oscar-nominated actresses, with mixed results: Melissa Leo is competent and no more in an unrewarding role as a villainous cop, Juliette Lewis chews the scenery memorably as Kenny’s bedraggled ex-girlfriend, and Minnie Driver provides some dryly humorous perspective as a fellow law student who acts as a coolant on Betty Anne’s constantly burning anger. The best work here comes from Sam Rockwell, who kicks all kinds of ass playing Kenny Waters as a mercurial, fun-loving troublemaker who’s crumpled by his wrongful conviction.

Their efforts can’t keep Conviction’s righteousness from toppling over into self-righteousness. Betty Anne barrels forward in the face of everything (even destroyed evidence and Kenny’s willingness to give up), and the movie is content to go right along with her. Erin Brockovich remains the touchstone for this sort of drama, and it’s layered and complex in a way that this film can only dream of.