Mayor Pro Tem Danny Scarth and city officials are learning quickly that even thinking about plopping a huge, artist-designed Fort Worth monument alongside I-30 anywhere near Oakland Avenue’s scenic corridor may be tantamount to sacrilege.

Eastside residents led by former city councilwoman Becky Haskin fought for years to protect those green, rolling hills at the city’s east entrance, maintaining a natural gateway for visitors approaching downtown. The rights-of-way are considered part of a freeway scenic preservation corridor as established by city ordinance. On the highway’s south side, the 160-acre Tandy Hills Natural Area is a gorgeous reminder of what these landscapes looked like years ago. Across the highway, knobbed hills and green grass — and the famous little mimosa tree that gets decorated surreptitiously each Christmas — provide a gentle welcome to motorists. 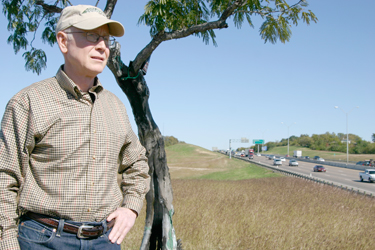 So some residents felt like they’d been stabbed in the back when city officials announced last week that Scarth would host a public meeting to give an overview of a so-called gateway monument project. A conceptual design of the monument would be shown and questions answered. Furor erupted when word leaked out that the hills near Oakland Avenue had been considered as a potential site.

“It was supposed to be just below that little tree that everybody holds so dear,” Greater Meadowbrook News publisher and Eastside activist Wanda Conlin said. “We have a unique entryway into Fort Worth from Dallas, and our part of it is really beautiful. I want to save as much of it as we can and not clutter it up.”

Scarth did not respond to an interview request for this article.

The city released an artist’s rendering of the monument, but without scale dimensions. Conlin was dismayed when she called a city official and discovered how much room the monument would require.

“I found out this thing is two big slabs, each of them billboard size,” she said.

Public outcry might have already forced city officials to modify their plans, even before the first public meeting, which is at 6:30 p.m. Wednesday at the East Regional Library, 6301 Bridge St. City spokesman Jason Lamers said a new location is now being considered.

“That location ended up being near that lone tree on I-30, but now … there has been a shift to ‘Let’s put that in another location,’ ” Lamers said. “They’re looking at possibly an area just west of Loop 820 on the north side of I-30.” 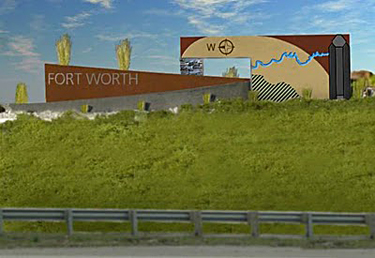 News that the green space near Oakland Avenue was no longer being considered calmed residents, but concerns remain about the monument’s appearance.

Conlin hesitated to criticize the design, saying art is subjective and open to interpretation. But she described it as potential “clutter” when describing how important preserving the scenic corridor is.

Fort Worth artist Susan Sitzes designed the public art project. She did not respond to an interview request for this article but is expected to attend this week’s community meeting.

Young is admittedly rattled about the monument because he envisioned the city using native prairie grasses and other plants as part of a landscape design. He didn’t imagine a large sign would be considered landscaping.

Native landscaping, however, is included in the monument’s design, Lamers said.

Young was somewhat comforted once the city backed away from its original idea of putting the monument near the mimosa tree and Tandy Hills. But even considering the monument for such a treasured spot shows a serious lack of sensitivity and community understanding from city officials, particularly Scarth, the community’s elected representative, he said.

Residents are also grousing about being kept out of the loop until now, though the project has been in the planning stages for years.

“That is a limited amount of [citizen] input for the project to be this far along,” said Jim Marshall, a volunteer with Friends of Tandy Hills Natural Area.

Young suspects the public meeting will be a dog-and-pony show that’s more about sharing information than soliciting it.

“When it reaches this stage of planning, it’s pretty much a done deal even though its not supposed to be,” he said.

Lamers said the city has been upfront during the planning process and will solicit plenty of public comment at the meeting. “It did go through the normal public process that any kind of public art would go through,” he said.

A committee was created in 2005 to work with city staff in coming up with a landscaping design. Together, they decided to include a public art project with the landscaping.

“They wanted a piece of art that would mean something about what Fort Worth is, something that reflects the community,” Lamers said.

Still, Young feels betrayed. He recalled the city parks department polling residents to determine where the money would be spent and a former park employee telling him the grant money would be used for landscaping alongside I-30 across the street from his beloved Tandy Hills. Young is founder of Friends of Tandy Hills Natural Area, a group devoted to conserving and restoring the park.

In 2004, the city’s Environmental Management Department received a Governor’s Community Achievement Award, winning a $265,000 grant from the Texas Department of Transportation. Young has been pestering the city for several years to find out how the money was being spent.

“I’d like to know how this money got funneled into public arts when this money was set aside by TxDOT for roadside landscaping,” he said.

TxDOT doesn’t care what the city does with its grant money as long as the project is safe and requires no maintenance from state workers who tend to rights-of-way upkeep.

“Otherwise, we don’t really have a dog in the fight,” TxDOT spokesman Val Lopez said. “Every decision is going to be the city’s. They are going to have to maintain it.”