A romantic comedy aiming to be the Broadcast News for our generation, Morning Glory boasts a wealth of talent both in front of and behind the camera, which is partly why it’s so disappointing. Rachel McAdams stars as Becky Fuller, a local TV producer who has dreamed of working on The Today Show ever since she was little. Her big break comes from one of Today’s competitors, an old, irrelevant sinking ship called Daybreak that needs a new executive producer. 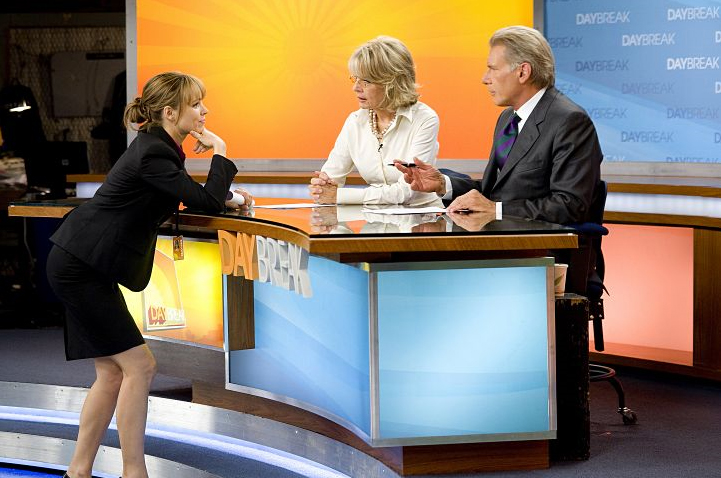 Undaunted by the lack of money and the negative vibes in the office, Becky starts her new job with what looks like a major coup, strong-arming semiretired journalism legend Mike Pomeroy (Harrison Ford) into joining Daybreak as a co-anchor. A hard-news guy with a giant stick up his ass who thinks morning TV shows are crap, Mike quickly becomes Becky’s biggest headache. He refuses to do fluffy pieces — or even say the word “fluffy” on air — and spends entire broadcast segments silently making “my soul is dying” faces while his colleagues yuk it up over Hollywood gossip and cooking demonstrations.

The movie is largely about the professional tug-of-war between these two — she has to teach him how to lighten up, and he has to teach her that a morning show can do serious journalism. This has the unfortunate effect of giving short shrift to both Diane Keaton (playing Mike’s co-anchor who takes an instant dislike to him) and a romantic subplot between Becky and an evening news producer for her network (Patrick Wilson). Screenwriter Aline Brosh McKenna, who did such a great job with workplace issues in The Devil Wears Prada, winds up falling into boilerplate dialogue about the dangers of letting work consume one’s personal life.

These issues would obviously matter a lot less if the movie were funnier. There’s a nice montage of ratings stunts pulled by Becky and everyone on Daybreak except Mike, but the wisecracks are limp here. Director Roger Michell frantically tries to overcompensate by amping up the atmosphere. That doesn’t do his actors any favors. Good as McAdams has been elsewhere, this is one of those times when she does entirely too much. Her character is supposed to be klutzy and overeager. However, McAdams can’t seem to enter a room here without a vivacious flourish, and she makes Becky’s upbeat professionalism seem borderline crazed. Ford and Keaton overact as well, and the movie quickly becomes oppressive, with everyone apparently hellbent on convincing us that we’re having a good time. We do get a winning, understated bit near the end, when Becky finally gets Mike to crack a genuine warm smile, but that moment of grace reminds us of what the rest of the movie is missing.

Strange that a movie that’s all about balancing seriousness and frivolity should throw off a director who has made a string of worthy low-budget British dramas but is still best known for Notting Hill. Then again, that film was 11 years ago, and Michell hasn’t done much light entertainment since, which is perhaps why he seems so uncomfortable with it. Morning Glory sympathizes with the high-minded Mike, but ironically it ends up too much like Becky, trying way too hard to please.