“It is impossible to get a man to understand something when his paycheck depends on him not understanding it.” — Upton Sinclair

The villains of this story are many. They come from all corners of the world. They have many different races and religions, and they work in many different professions. Some of them have familiar names (Greenspan, Paulson, Bernanke), while others are likely unknown to you. They all have two things in common: They plunged us into the worst economic crisis in history, and they all grew very rich doing it. 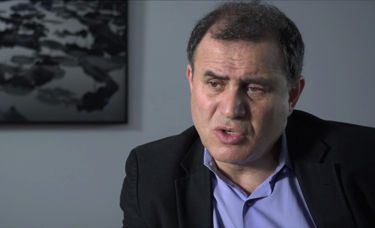 A prime candidate for the “if you see one documentary this year” tag, Inside Job explains the global financial meltdown of 2008 in terms that are both clarifying and enraging. It’s urgent stuff whether you’re a Tea Partier or a lefty, whether you have no idea what a derivative is or … well, nobody can explain what a derivative is. That’s one of this movie’s points.

Writer-director Charles Ferguson is best known for No End in Sight, a trenchant 2007 critique of the Bush administration’s mismanagement of the Iraq war. The financial crisis presents him with a more complicated subject, but he’s not daunted by his task. Granted, a film like this can easily bog down in statistics, and indeed moviegoers who quail at numbers might find themselves swamped here.

Most viewers, though, will find the movie’s graphics (created by the firm of Bigstar), its interviews (which feature heavy hitters like Nouriel Roubini, George Soros, and Singaporean Prime Minister Lee Hsien Loong), and its narration (read by Matt Damon) helpful in laying out how deregulation created a system with a staggering lack of accountability. Predatory lenders charged extortionate interest rates, lawmakers wrote legislation to protect Wall Street’s profits, regulators stood on the sidelines and cheered, and no one bothered to look out for the consumers. Most culpable of all were the investment bankers themselves, who were gambling with other people’s money and knew they had golden parachutes stored up if they bet the wrong way. Is it any wonder they went nuts?

This whole fiasco happened with a Republican in the White House, but on this issue the Democrats don’t enjoy any moral high ground. It comes as no surprise that the financial sector has corrupted the government (both political parties, members of Congress, the Treasury Department, the SEC, and all the watchdogs that are supposed to protect us). For me, the movie’s big revelation was how the giant financial firms have also systematically bought off economists at top-ranking universities, many of whom earn many times their faculty salary by consulting or serving on the board of Morgan Stanley, Merrill Lynch, and others. In return, they support the bailouts and the status quo and even now defend deregulation. Ferguson gets some of these rotten professors on camera, and no one comes off like a bigger worm than Columbia Business School Dean R. Glenn Hubbard, a man repeatedly paid off by Goldman Sachs.

You may remember Michael Moore covering much of this same territory in last year’s Capitalism: A Love Story, but Ferguson’s film is stronger, benefitting from the director’s sober approach. Ferguson generally eschews Moore’s attention-grabbing antics, but he does take a few tricks from Moore’s playbook here (using Bachman-Turner Overdrive’s “Takin’ Care of Business” as a musical cue), and he finds a few humorous notes in the interviews, like when Federal Reserve governor Frederic Michnik straight-facedly claims that he resigned from the Fed in 2008 to edit a school textbook. Former New York governor Eliot Spitzer contributes to the laughs, too, when he expresses mild surprise that prosecutors didn’t try to jail the CEOs the same way they went after him: by going after the executives who used prostitutes.

These moments of levity are welcome in a film with such dispiriting subject matter. Maybe the most amazing thing about it all is we have no assurance that this entire mess won’t happen all over again (unless some enterprising trial lawyer scrapes together a class-action lawsuit, which I can’t believe no one has tried yet). The robber barons of these financial systems got away with their fortunes. Neither a Democratically controlled Congress nor a newly elected president found the will to write new regulations that would prevent a recurrence. Years down the road, the economy will go bad again in exactly the same way. We will once again have no one to blame but ourselves, and it’s us working stiffs who will pick up the tab, unless we take the advice of films like Inside Job.