I’m in a difficult position here. Harry Potter and the Deathly Hallows: Part 1 is the seventh installment of an eight-part series. As such, it’s not necessarily meant to stand on its own. Instead, it’s a means to an end, a way of setting up the final film that will come out next summer and bring this at times extraordinary cinematic saga to a close. When everything’s finished in the not-so-distant future, no one is going to judge this film on its own merits, least of all me. Yet that’s exactly what I have to do, since this review can’t wait until next year. So I must say that, on that basis, this movie doesn’t work well at all. You probably don’t care. Now you can see my problem. 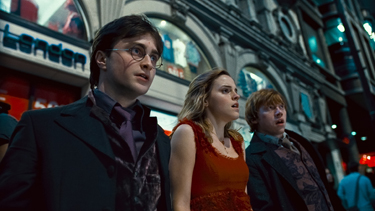 Instead of beginning his seventh and final year of study at Hogwarts, Harry (Daniel Radcliffe) has left school along with Ron and Hermione (Rupert Grint and Emma Watson) to hunt down and destroy the Horcruxes, cursed objects that contain pieces of the soul of Lord Voldemort (Ralph Fiennes) and allow the Dark Lord immortality while they exist. When Voldemort overthrows the Ministry of Magic, the three young wizards go from dropouts to fugitives and are forced to assume disguises and teleport themselves all over Britain to stay out of the bad guys’ clutches.

As we all know, the story here covers only the first half of the final Harry Potter novel. On one hand, this is a sound decision, because Rowling’s series thrives on clarity and story detail that needs time for the filmmakers to tease out. On the other hand, this leaves us with a current film that’s all buildup and no payoff. Maybe that’s why director David Yates never seems to find a groove. Indeed, the movie has pacing issues that we haven’t seen since the first two Potter films that Chris Columbus directed. (I mean, yikes.) Yates’ handle on basic storytelling devices remains shaky — the flashbacks in this movie are clumsy, and even though the tale of the titular deathly hallows plays out in an elegant shadow-puppet sequence, it still goes on too long and impedes the overall flow.

The author provides many action scenes, and a number of Harry’s allies are killed in the fight against evil, yet somehow none of this gives the movie any sort of emotional traction. The temporary breakup of Ron and Hermione’s romance is dramatically inert as well, even with a scene when one of the Horcruxes tries to turn Ron evil by giving him a vision of Harry stealing Hermione away from him. This is yet another instance of a scene that’s hair-raising on the page but disappointing on the screen. During one lull in the action, Harry tries to cheer up a depressed Hermione by dancing with her (to Nick Cave’s “O Children,” no less). That little scene drags on an already leaden film, but the genuine emotion here sticks out in a movie that’s overly mechanical.

There’s an even worse problem: The movie is too dark. The filmmakers originally intended these last two films to be shot in 3-D, only to scrap the format at the last minute (for this movie, anyway) because the effects couldn’t be done satisfactorily on time. No 3-D is generally better than bad 3-D, but this movie still leaves you straining your eyes to see what’s going on during Harry and Hermione’s encounter with a giant serpent inside an empty house or during a chase through a forest with the three wizards being pursued by Voldemort’s foot soldiers. The lack of light hampers the action sequences and also ruins any chance of this movie attaining any sort of beauty or wonder like we’ve seen in the previous Potters. I’m open to the possibility that the print or the projection might have been faulty at the screening where I watched this film. From what I saw, though, this movie is a visual disaster.

I can’t help wondering if breaking Rowling’s last novel into two films was a mistake. The current film might well have worked better as the first half of a gigantic five-hour movie to cap off the series. Impractical as that might sound, I think a lot of Potter fans would have gladly lined up for such an event. That is the sort of fan loyalty that the series has earned over the years: Large numbers of people will buy tickets to this film, regardless of any quality issues, so they can enjoy the full Potter experience to be completed eight months from now. That’s great, but we still deserve more from this penultimate installment than it gives us.