Here’s a movie with a tortured history. Garden of Eden was a manuscript that Ernest Hemingway worked on from 1946 until his 1961 death. The piece, based partly on his own experiences with women and partly on the tumultuous marriage of his acquaintances F. Scott and Zelda Fitzgerald, wasn’t published until 1986, and the editing of the manuscript was controversial. Now that unfinished work has ill-advisedly been turned into a film with the author’s name awkwardly appended onto the title: Hemingway’s Garden of Eden. This period drama made a fleeting appearance at an Italian film festival in 2008 and hasn’t been heard from since until now, as it’s being hastily released into a select few theaters around the country. 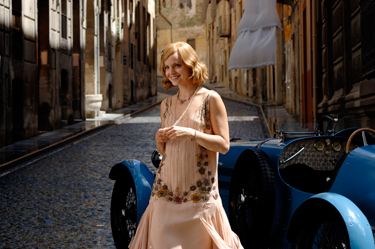 The first warning sign comes early when the main character pours a drink and says, “You should be careful with absinthe. It tastes exactly like remorse, only it takes it away.” I imagine that line will set off alarm bells in any experienced moviegoer’s head.

The film begins in 1920s Paris, where World War I veteran and aspiring writer David Bourne (Jack Huston, the grandson of the legendary film director John Huston) meets an alluring and much wealthier fellow American named Catherine Hill (Mena Suvari). Their whirlwind courtship and marriage runs aground during their honeymoon in the south of France, when Catherine’s issues start to surface. Impulsive and imperious in equal measure, Catherine is also — forgive me for using the contemporary word here — bi-curious and soon invites an Italian heiress named Marita (Caterina Murino) into a ménage à trois situation. When the novelty of that wears off, Catherine starts playing power games with both of her partners and nagging David over the direction of his writing career. It makes a grimly logical sense that David and Marita wind up bonding with each other, not over the sex that they’re having but as a defense mechanism against Catherine’s ever-growing insanity.

More likely, though, it’s because director John Irvin (who made a decent Irish revenge comic operetta back in 1994 called Widow’s Peak) prettifies this thing. Why are so many movies about three-ways (Head in the Clouds, Henry and June) set in the libertine 1920s among artists and intellectuals? Are they really the only people who ever did that? Or is it just that filmmakers are too squeamish to explore the messy possibilities of these relationships unless they can quarantine them in the past? Whatever the reason, the effect is the same: deadeningly tasteful and high-minded treatment of sex that ignores its carnal side. So many writhing naked bodies to so little effect. It’s all exquisitely, excruciatingly dull.

That’s all just run-of-the-mill badness, though. The “what the hell were they thinking?” part of this movie is a completely unrelated digression when David writes a short story about a boy (Mathieu Koie Levi Palsvig) who realizes what a bastard his ivory hunter father (Matthew Modine) is while they’re tracking an elephant on the African steppes. This entire plot is acted out for us, interrupting the David-Catherine-Marita storyline without shedding any light on it. The story about the elephant becomes a mere bone of contention among the three, and the manuscript comes to an all too predictable end that you don’t care about, just like the rest of the movie.