The least interesting big-budget movie franchise currently running, the Narnia series rolls out its latest installment this week with The Chronicles of Narnia: The Dawn Treader. The clumsiness of The Lion, the Witch, and the Wardrobe gave way to a uniform tasteful dullness in Prince Caspian, and little that happens in this third film disturbs that. 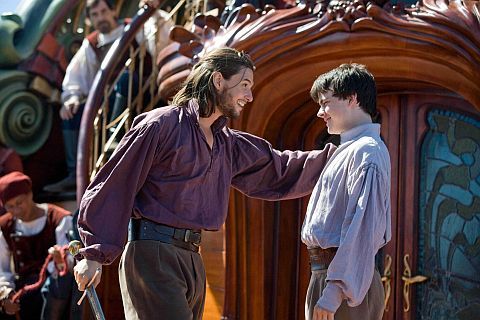 The Pevensie siblings are reduced by half here; Susan and Peter (Anne Popplewell and William Moseley) are now too old to reach Narnia and are mostly shunted off to one side in the movie. Instead, younger siblings Lucy and Edmund (Georgie Henley and Skandar Keynes) occupy front and center when they’re transported to Narnia along with their horrible cousin Eustace (Son of Rambow’s Will Poulter). Landing in the middle of the ocean, they’re picked up by the flagship of Narnia’s navy, which is transporting King Caspian (Ben Barnes) and a fighting force under his command. It’s initially unclear why Lucy and Edmund are needed in Narnia with the kingdom at peace, but it turns out that Caspian requires their services to conquer an evil green mist that has swallowed up a great many ships and Narnians.

Wait, seriously? The villain of this thing is green mist? That has to be the worst choice of bad guy since The Happening. Oh, the mist is supposed to tempt each of these characters toward the dark side by promising them things they want, but it does that in a ham-handedly obvious way. The mist isn’t scary in itself, either, and the characters’ deepest wishes prove to be unrevealing. Edmund is once again promised a kingship by the spirit of the long-deceased White Witch (Tilda Swinton) — surely it’s a bad sign for a film series when a character killed off in the first movie keeps getting brought back.

Veteran director Michael Apted is new to the series, and he does a professional job of integrating the special effects into the action, though he can’t give any momentum or urgency to the adventurers’ quest for seven lost swords belonging to seven lost lords. The movie’s attempts at humor are lame, and whenever things threaten to get too uncertain, Aslan (voiced by Liam Neeson) materializes to deliver the moral in a baritone soothing enough to put you to sleep. The whole movie has a soporific effect, and the only time your pulse rate rises is during the climactic battle with a sea serpent, a truly frightening creature with catfish-like whiskers and centipede-like claws.

This sequence marks the first time that the Narnia series has ever felt like it takes place in an enchanted and dangerous world. It comes too late to save this movie, but perhaps it can point a new direction for future films in the series, if there are any. Otherwise, the Narnia films’ cultural legacy will be limited to Saturday Night Live’s “Lazy Sunday” rap video. I’m sure that’s not what everyone had in mind when this series launched.

The Chronicles of Narnia: The Dawn Treader