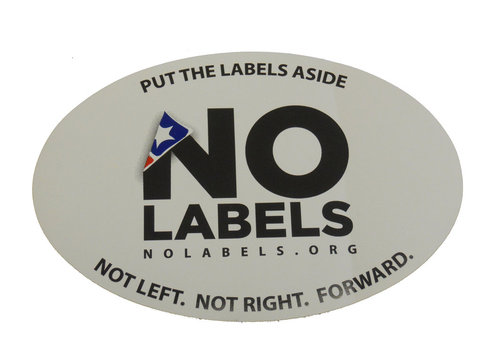 Have you heard about the new national political organization called No Labels? It’s a ragtag collection of journalists, pundits, and politicians who claim they support civility in campaigning and bipartisanship in government. That sounds great, though it’s mostly an exercise in vanity – nowadays the biggest pat on the back you can give yourself is publicly announcing: “I am a centrist independent, above the ugly fray of politics.”

So far, No Labels does not endorse specific solutions to big problems. Instead, it will hover on the sidelines like a surly Catholic school nun, rapping the knuckles of any candidate or elected official it deems to be extreme. Since it’s not taking a stand for anything besides a vague idea of “common sense,” how does it decide what’s beyond the pale? Most people already know that Tea Party activists who compare Obama to Hitler are idiots. But the radical anti-Obama crowd likely won’t be joining No Labels, so the “Can’t we all just get along?” mantra will go unheeded by the extremists. That means liberals must move even further to the right to appear conciliatory.

TV slacktivist Jon Stewart is partly to blame for all this “restore sanity” silliness. Though he’s still an astute observer, Stewart’s comedy is becoming predictable and preachy. As America’s self-appointed political nanny, he can be relied upon to scold both sides equally – whether or not both sides are equally to blame.

The end result? Most Republicans will ignore him and continue to use distorted facts, ad hominem attacks, and visceral appeals to push their agenda through. Most Democrats will make a self-righteous show of how sane and reasonable they are – then turn out to be wusses when it comes to standing by their principles. In other words, expect the status quo to continue.