As anyone who knows her can attest, Fort Worth artist Jo LeMay Rutledge is both blunt and a bit of a wisecracker. When one of her oil paintings was recently accepted in a citywide show, the 61-year-old was asked to write a short statement explaining why she makes art. “I wrote, ‘I need the money,’ ” she said with a laugh. “They didn’t print that in the brochure.”

And although it’s true that Rutledge feels considerable satisfaction when a collector is sufficiently moved by one of her paintings to write a check, she admits, “The reality is, I love it when people love what I do. That suckers me into doing it all over again.” 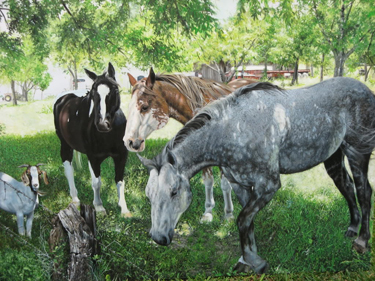 The self-taught artist was born in Massachusetts but moved to North Texas during high school. She’s been painting and drawing for most of her life, copying beloved works by masters from Caravaggio to Monet because she couldn’t afford to buy them. During the last two decades she has become a favorite artist among the city’s business and cultural leaders, thanks in large part to her husband, Jerrell Rutledge, who for decades was a hairstylist to Cowtown society women. Ed Bass, whose mother was one of Jerrell’s occasional clients, wears Jo’s hand-painted silk ties every year at Stock Show time, and the CEO of one of the city’s major cultural institutions commissioned a portrait from her. While Rutledge is grateful for the patronage, time has only increased her desire to be taken seriously as an artist, to create work of some lasting value. Well-heeled patrons have been both a great help and a bit of hindrance –– the aforementioned CEO also owns a Picasso and a Warhol, so appreciation for the Rutledge understandably gets lost in the shuffle. (“I have mostly been known as the hairdresser’s wife,” she said with a heavy dose of wry self-deprecation.)

Rutledge is ready to step up and claim a reputation for herself –– her first solo exhibit, Farm to Market, opened last weekend at Artspace 111 and is a collection of her most recent paintings, which reside in the Western genre but play with the iconic imagery of Remington and Russell by deflating it with technically and compositionally eccentric choices. Many of the images depict life on a West Texas ranch in an off-hand, almost documentary-style way –– horses and cattle are displayed, but their faces are distant or obscured, compelling the viewer to see them as abstract shapes full of muscular curves. The grass, the trees, and the clouds quiver with life and aggressively compete for attention with the human and animal subjects. Her paintings of un-mown prairie grass and wildflowers are spectacular, full of dynamic vertical paint slashes that make the tableaux seem simultaneously abstract and photorealistic.

Rutledge was mostly drawn to Western art at this stage in her career because she believes she has something fresh to contribute. “We need to get past the ‘noble cow and crying Indian’ phase and be honest about ranch life,” she said. “We need to feel the sticker burrs and step in the crap.”

And, of course, Western art is perennially popular in Fort Worth: “When in Rome,” she said, “do as the Romans do.”

The self-described “late bloomer” is just now getting her first national attention as an artist worthy of respect –– her work was accepted into the prestigious Coors Denver National Western Stock Show Art Exhibit, where the son of the man who owns the largest private collection of Western art in the country snapped up one of her paintings. Last year, the International Guild of Realism –– a global group of artists who advocate for the return of realism in contemporary art –– accepted one of her canvases into a juried exhibition.

Such recent, hard-won approval is most welcome, but don’t expect Rutledge to get stuck in a ranch-art ditch. She is mercurial and often spiritual in her subject matter: Her most prominent paintings before her Farm to Market canvases were part of The Cross Series, featuring collage-like assemblages of modern historical images and Old Master iconography that tried to express the idea of present time and eternal time existing concurrently. She’s recently been dabbling in what she calls “shape art” –– goofy visual puns like “The Pork Chopper” in which a vividly realistic motorcycle is painted within the outline of a pig shape. She admits her constantly shifting style and subject matter have not helped her earn a wide reputation.

“I haven’t created a consistent body of work that people can easily identify as mine,” she said. Nevertheless, she’s happy that acclaim is beginning to trickle in while she’s still walking the planet: “Julian Schnabel said the only good artist is a dead artist, but I don’t want to wait that long.”