As it turns out, The Illusionist isn’t the only movie out this week that’s set in Scotland. If you go into this toga-and-sandals epic pumped for a fire-breathing piece of entertainment on the order of 300 or Gladiator, you’re going to be disappointed. I wasn’t expecting that, but neither was I expecting a contemplative drama made with rigor and even some pictorial beauty. I found the latter, so I went away happy. 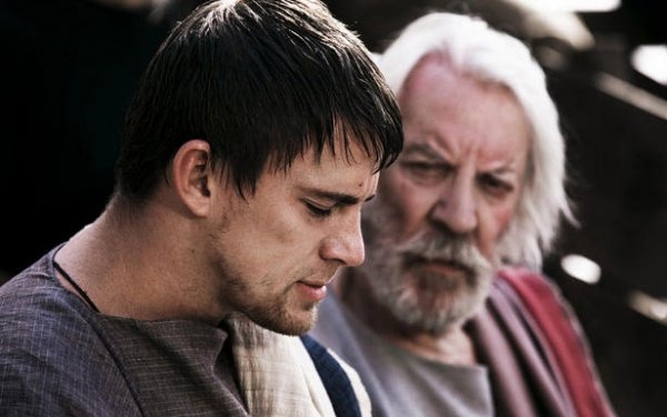 The film is based on The Eagle of the Ninth, a meticulously researched 1954 novel by Rosemary Sutcliff. Set in 140 A.D., it’s about Marcus Flavius Aquila (Channing Tatum), the son of a Roman military commander who disappeared 20 years earlier in the wilds of Britain along with the 5,000 soldiers under his command. Now Marcus is a centurion who has asked to be posted to the distant island, bent on redeeming the family honor even after he’s wounded in battle and honorably discharged. When he hears a rumor of a native tribe using his father’s legion’s metal eagle standard as a trophy, Marcus determinedly ventures on his own, north of the recently built Hadrian’s Wall, to steal it back. Accompanying him is a slave named Esca (Jamie Bell) who knows the territory and speaks the Britons’ language. Marcus saved Esca’s life after he was defeated in the gladiator’s arena, but Esca is the son of a native chieftain murdered by the Romans. Where do Esca’s loyalties lie?

This is the second movie by the partnership of director Kevin Macdonald and screenwriter Jeremy Brock, who previously gave us The Last King of Scotland. They cut out some of the book’s subplots, like Marcus’ romance with a woman and his devotion to a tame wolf cub. I didn’t miss either of those, but I could have used a bit more detail about the texture of life in Roman-occupied Britain. The scene with Marcus attending a festival of games feels convincingly low-rent. The battle scenes are somewhat underwhelming as these things go, and considering that the story is brutal enough to include children being murdered in cold blood on two separate occasions, this PG-13-rated film might have benefitted by going for an R and giving the audience a better sense of the violence of the place. I do like the way the movie stays true to the ethos of its setting; the natives aren’t depicted as peaceful victims of the Romans, nor does anyone deliver an anachronistic speech about slavery being wrong. The filmmakers even minimize Channing Tatum’s flaws; he still can’t act, but his athleticism serves him well in this role, and he thankfully doesn’t try on a British accent like so many actors do in movies set in antiquity.

Macdonald frequently frames his characters dwarfed by the immensity of the rolling Scottish landscape, and cinematographer Anthony Dod Mantle finds breathtaking shots amid the carnage, especially the one near the end, of a vanquished Celtic warrior prince (played by Tahar Rahim, the Arab-French star of A Prophet) with the war paint washed off his face by the waters of a creek. The emphasis on visual beauty over violence makes the film highly unusual for something put out by a Hollywood studio for the popcorn crowd. The Eagle works as a visual tone poem rather than an action flick, which is why it earns a thumb up from this spectator.