J. Quincy Romine, lead singer and co-songwriter for the baroque Americana band Beauxregard, has an intriguingly diverse set of influences. He loves movies –– especially Westerns –– at least as much as music, and he draws enormous musical inspiration from them. His appreciation for Fort Worth history is intense and extensive –– let him tell you the story of how Luke Short shot down Jim Courtright outside the White Elephant Saloon in 1887 and listen to the relish in his voice. He sounds equally awed when he lists the vocalists who’ve inspired him: Freddie Mercury (“the single greatest voice to grace rock ’n’ roll”), David Bowie, Lou Reed, and Mike Patton. 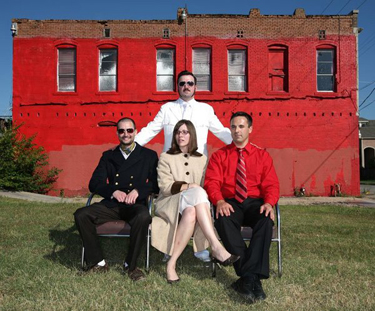 “We call our music ‘future Western,’ ” Romine said, speaking for guitarist and co-writer Ryan Rhodes, bassist and trumpeter Jon Toles, keyboardist Laura Toles, and drummer Curtis Tinsley. “It’s a post-punk sound with an Old West bent to it, something really syncopated, where organic meets electronic. Most of our songs are a combination of acoustic and electronic.”

Beauxregard played its first show in 2006 after many months of rehearsal. Romine said his band’s painstaking approach to recording and performing comes mainly from his years (1998-2003) playing in the Denton band The Trophy Club with Rhodes and bassist Toles. The creative paradigm there was chaos, with members improvising songs live and sometimes breaking into arguments onstage because the band was inexperienced and, in many ways, directionless.

After The Trophy Club ended, Romine and Rhodes, who met in Euless when they were 13, continued writing songs just for the hell of it. That eventually led to the formation of Beauxregard and the release of a critically acclaimed 2008 EP, When Balloons Were Sleeves. The live concept for Beauxregard also took shape then –– the band members began wearing three-piece suits, bowler hats, and cravats to evoke the grim stylish qualities that Romine loves from the late 19th and early 20th centuries.

“From the beginning we wanted an intentional opulence for the band,” Romine said. “We wanted to create images in people’s minds [of a certain era]. Glam is a big influence for us in that area. Theatrics, a sense of dressing for the part, is very important.”

Beauxregard took two years to write, rehearse, and record Gryphoemia. Referring to the term for fictional 19th century heroines, the album was produced by Romine and Rhodes and recorded in the tiny home studio that came with the Fort Worth house recently purchased by Romine and his wife. The band recorded a total of 28 songs that encompass the sprawling tale of a young New Orleans socialite who must choose between the much older family lawyer who courts her and the young man her family disapproves of. Betrayal, insanity, and murder make appearances, too. Ultimately, though, only about half of the tunes made it onto the album.

Beauxregard will continue playing shows to promote Gryphoemia around the North Texas scene. Romine has recorded and produced Denton bands like Land Mammals and Pet Hospital, and he’d like to work with more groups in his home studio. He also hopes to record an EP of Beauxregard covering Tin Pan Alley-style public domain songs from the turn of the last century through the 1920s, including some made famous by Al Jolson. But more urgently, the band wants to release the other 14 tunes written and recorded for Gryphoemia.

“We had to be talked off the ledge of putting out a double album [as our first full-length],” said Romine with a chuckle. “People said, ‘It’s too ambitious. It’s off-putting. People don’t know who you guys are yet.’ But there are gaps [in Gryphoemia’s story] that need to be filled in.”