“I refuse to live in L.A.,” Charles Baker said. It’s not something you’d expect to hear from a working actor with his sights set on Hollywood. “I’ve seen people go out there and get eaten alive. The cost of living here is much lower, and the arts community here is so underrated.”

The self-described Army brat (his father was a colonel in the United Nations armed forces) grew up in various places from the U.K. to Israel and wound up settling in Fort Worth as a teenager. Having just turned 40, he’s now performing with some of Hollywood’s biggest names while maintaining his home here. 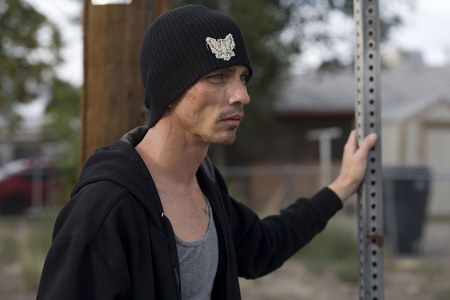 The exceptionally slender Baker is best known for his recurring role as a drug addict named Skinny Pete on the TV show Breaking Bad. He was taking classes at what was then called Tarrant County Junior College, preparing to become a music teacher, when his instructor told him that he had the talent to be a performer. He initially wanted to be a singer and also took courses in dance and mime, but he vividly remembered when the acting bug first took hold. “I was playing a lawyer in a stage production of Whose Life Is It Anyway?, and all of a sudden the audience melted away and the words I was saying felt like my own. That’s not something that happens to actors very often.”

After extensive work in local theater and a few gigs with Ballet Concerto and other dance troupes, he landed the part of a bad guy’s henchman in a Walker, Texas Ranger reunion movie. “I basically BSed my way into film,” Baker said, noting that he had never taken a course in acting for the camera. “Here I was reading lines with Chuck Norris and Janine Turner, and my brain was screaming, ‘They’ll know you’ve never been in a movie before.’ ”

That role has set the tone for a career largely spent playing lowlifes and criminals, which is why he cherishes his biggest break so far. Called to an audition in Oklahoma last fall, he found out shortly before his callback that it was for a part in a film directed by the legendary Terence Malick and starring Ben Affleck, Javier Bardem, Rachel McAdams, and Rachel Weisz. The film has yet to be titled and Baker’s non-disclosure agreement prevents him from discussing the plot. However, the actor did say that his role was a more romantic part than his usual characters. “Fortunately, Malick doesn’t watch TV,” he said. “He didn’t know I usually play scum. He said he didn’t see that in me. That meant a lot.”

(The experience was thrilling in another way — a huge James Bond fan, Baker played all his scenes opposite Olga Kurylenko, the beauteous Russian lead actress from Quantum of Solace.)

Malick’s films are notorious for taking a long time to reach the screen, so Baker isn’t letting the grass grow. He’s also playing the lead role in Fort Worth filmmaker James M. Johnston’s short film Knife, which is currently making the rounds of film festivals. He also stars in another short film that’s available on the web called Mikey Meets Joel. The same comic characters in Mikey are also the lead roles in a feature-length script called Mortality that Baker is involved in.

Aside from getting to know the local casting directors whom Hollywood occasionally employs, Baker cites technology as a key factor in his ability to build an acting career without living in Los Angeles. Facebook allows actors to maintain a fan page while DSLR cameras (like the one Baker owns) let them film auditions in the comfort of their own home. “A lot of local actors get complacent,” he said. “They look at the guys in the room [whom they’re auditioning with] and think, ‘I know these guys. I’m better than them.’ They don’t realize that they’re competing with famous people, too. Hollywood knows now that they’re not just stuck with the actors who walk through the door.”