A girl in petticoats and great distress runs across a fog-encrusted heath while lush orchestral music on the soundtrack speaks to the tumult in her soul. Oh yeah, we’re in Jane Eyre. Specifically, we’re at the very beginning of this latest film adaptation of Charlotte Brontë’s novel, and while I could say that this is the best movie we’ve ever had of the story, that would tell you surprisingly little.


That’s because even though Jane Eyre has been filmed over and over, no previous iteration of it has been remotely good enough to stick — not the 1943 version with Orson Welles devouring all the scenery and a bland Joan Fontaine along with it, not the 1970 version with a too-old Susannah York in the title role, not the 1996 version with a wildly mismatched Charlotte Gainsbourg and William Hurt. (Contrast this with Emily Brontë’s Wuthering Heights, which received a definitive film version in 1939 that hasn’t been approached since.) This latest version of Jane Eyre works only up to a point, but it’s the first one that made me feel like I was watching Jane Eyre and not “Jane Eyre,” a real movie rather than an exercise in wrestling the novel into the shape of a movie. 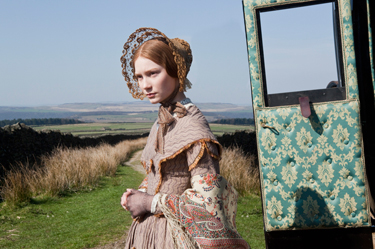 The story begins toward the end of the novel, with a traumatized Jane (Mia Wasikowska) landing on the doorstep of a missionary named St. John Rivers (Jamie Bell), having walked through a thunderstorm from Thornfield Hall. As St. John and his two sisters (Holliday Grainger and Tamzin Merchant) nurse Jane back to health, the film skillfully flashes back to young Jane (Amelia Clarkson) and her emotionally and financially impoverished childhood. As great a novel as Jane Eyre is, its story is unwieldy, and film versions often trip up over the parts of the movie that don’t involve Jane and Rochester. So it’s nice to see this one cover Jane’s early years so adroitly, thanks to the script by Moira Buffini, who adapted another literary work to similarly good effect in last year’s Tamara Drewe.

Jane Eyre boasts some terrific talent in the supporting roles: Judi Dench as Thornfield’s eminently sane housekeeper, Sally Hawkins as Jane’s frigid Aunt Reed, Simon McBurney as the dictatorial schoolmaster. However, with Jane Eyre there are only two roles that really matter. Michael Fassbender is properly haunted and dissipated as Rochester, and he doesn’t shy away from the character’s erotic attraction to the governess who’s half his age, especially during the scene after Rochester’s bedroom has mysteriously been set on fire. Yet the German-Irish actor has been better elsewhere; you probably know him as the heroic film critic-turned spy from Inglourious Basterds, but he brought more to a similar character in last year’s British working-class drama Fish Tank. He’s also too good-looking for the part, and although few viewers will complain about this, you do wonder whether Jane needs glasses when she pronounces him not handsome. (Brontë insists on her two main characters’ physical unattractiveness, but I’m not aware of any movie version of Jane Eyre that follows through on that.)

Notwithstanding, her excellent work as a contemporary American teen in The Kids Are All Right, something about the pale-skinned 20-year-old Wasikowska seems to make filmmakers want to put her in corsets and crinolines. After being swallowed up by the special effects in Tim Burton’s Alice in Wonderland, she asserts herself here rather more forcefully. She has the right degree of awkwardness, as Jane’s unvarnished opinions and depth of feeling fight their way through her natural timidity. The young Australian actress also does an impressive job with the particular burr that English people speak with in the northern part of the country close to Scotland. She is a major talent to keep an eye on. With her facial features, there’s an Emily Dickinson biopic out there somewhere waiting for her to star in.

The film serves as an abrupt change of pace for director Cary Joji Fukunaga, who made his filmmaking debut two years ago with the Mexican gangster drama Sin Nombre. His direction is astringent, intelligent, and fleet without undue haste. He gives the locations like Thornfield and Lowood a pleasing grit that makes them look lived-in. (Compare the typically overstuffed décor that Franco Zeffirelli brought to the 1996 film.) He even pulls a few horror-movie tricks to good effect. So it’s a pity that he can’t rise to the occasion in the film’s latter stages, which call for something more. The breakup of Jane and Rochester’s wedding and the subsequent appearance of Bertha Mason (Valentina Cervi) aren’t nearly grotesque or powerful enough. The scene when she leaves Rochester is well-played by the two actors, yet the movie never seems to give in to its emotions the way Jane gives in to hers. For all this director’s gifts, shock value and grand romantic passion don’t seem to be in his repertoire. Those aren’t qualities that you want Jane Eyre to be short of. Yet this sharply executed film has so much else to recommend it that Charlotte Brontë fans still have reason to line up.