Spoiler alert: This review gives away a major plot point (but we’ll warn you again when it’s coming).

Many big Hollywood science-fiction films set out to dazzle you from the beginning, but that’s not the game that Source Code is up to. This film spends much of its first hour or so behaving like an ordinary Hollywood thriller, albeit an intelligent one with an unusual premise. It saves its surprises for the end, in the form of a host of plot twists that give unsuspected depth to both the characters and the world they inhabit. The vistas opened up at this movie’s end are truly awe-inspiring. This is what great science fiction is supposed to do. 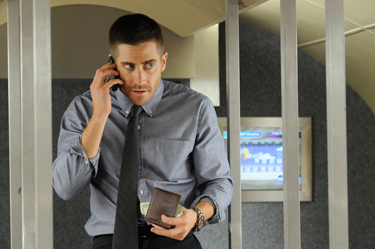 Jake Gyllenhaal portrays Capt. Colter Stevens, a U.S. Army helicopter pilot in Afghanistan who unaccountably finds himself back stateside, taking part in a highly classified military science experiment. He’s hooked up to machines that allow him to repeatedly relive the last eight minutes in the life of Sean Fentress, a history teacher who’s one of several hundred victims of a terrorist bombing of a commuter train outside Chicago that took place earlier that day. Colter’s handlers — a crisp Army colonel named Goodwin (Vera Farmiga) and a rumpled civilian scientist named Rutledge (Jeffrey Wright) — refer to his journeys into Sean’s consciousness as entering “the source code.” There’s no point in Colter saving Sean or the others on the train, because they’ll still be dead when he resurfaces in reality. His mission is to use his time inside the source code to find the bomber, who’s planning an imminent and much larger second attack in the real world and needs to be stopped. Like the hero in a video game, whenever Colter/Sean dies, he goes back to the last save point and pursues a different course of action in an attempt to change the outcome.

This is the second film directed by Duncan Jones, who debuted as a movie director two years ago with the cult sci-fi flick Moon. Here he’s given a larger budget and bigger stars, and he takes full advantage, most noticeably in the staging of the train explosion and the special-effects shots depicting Colter’s travels between reality and the source code. (The script forces Jones to show the same explosion a bunch of times. He does what he can, utilizing slow motion, CGI flames, different points of view, and other tricks.) He and veteran cinematographer Don Burgess also give the rest of the movie the glossy look of an old-school Hollywood thriller.

Yet the movie feels intimate despite all the trappings, no doubt because there are essentially only four characters, the fourth being Christina (Michelle Monaghan), a fellow passenger who inspires Colter’s efforts to somehow thwart the train bombing that has already happened. The density and complexity of the relationships here make the movie feel adapted from a novel, even though Ben Ripley’s script is wholly original. There is one instance when the story plays out predictably, a sequence in the middle when Colter/Sean chases down a South Asian passenger (Cas Anvar) who’s sweaty, nervous, and spending lots of time in the train’s bathroom — this character seems so obviously guilty that seasoned moviegoers will readily sniff him out as innocent. This, however, is one minor blemish amid the script’s flashes of humor (an early scene when Colter/Sean finds the bomb on the train and wonders what to do) and details that help convince us of the unusual premise, like the memory-jogging koan that Goodwin reads to Colter early on as he struggles to figure out where he is.

(OK, here it comes: Don’t read past this point if you want to be surprised at the theater.)

One of the film’s many surprises — and far from the biggest one — is the revelation that Colter is only able to enter the source code because he’s clinically dead as a result of being wounded in Afghanistan. The situation raises a whole host of ethical issues that are dealt with smartly, especially in the back-and-forth between Goodwin and Rutledge over what to do with Colter after the mission is over. Rutledge’s solution is inhumane, but you can see his logic. Even after the terrorism plot is resolved, the script plays on our emotions with Colter’s final phone call to his father (voiced by Scott Bakula), which is underplayed in devastating fashion by Gyllenhaal. The movie builds toward a conventional happy ending and gives it to us, only to then take one step further and create a new ending that opens up all manner of moral and even theological questions. In these remarkable final scenes, Source Code morphs from a satisfying pulpy piece of entertainment into a deeply moving experience. It’s all done so very cleverly, leading us to a final vision that feels both real and unreal. Picking up my analogy from before, if Colter is a video game hero, he ends up gaining an extra life. This magnificent piece of science fiction makes us feel what a mind-blowing experience that would be.