Damn, I love haunted house movies: The Haunting (the 1963 original), The Changeling, Alien (it’s a haunted house in space, OK?), you name it. I love being trapped in an enclosed, atmospheric, terrifying place. Now along comes Insidious, from the writer/director duo that started the Saw franchise. And while Insidious isn’t as scary as the aforementioned classics, it is scary enough, putting a unique twist on the “haunted” premise, to be worth a look. 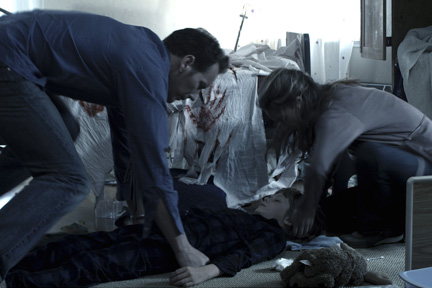 Josh (Patrick Wilson) and Renai (Rose Byrne) have just moved with their three children into a stately new house. However, not long after moving in, eldest son Dalton (Ty Simpkins) slips off a ladder, hits his head, and falls into a coma. Then, not untypically, strange things begin to happen: Books fall off shelves, noises spout from a baby monitor, men with skeletal faces walk out of walls. Thinking the house haunted, Josh and Renai move their family into another home. But strange things continue to follow them, and it turns out the problem may not have been the house.

The filmmakers seem to take their movie’s PG-13 rating almost as a challenge, showing us how scary a film can be within the limitations of a non-R rating. The team uses sinister sound effects, creepy music cues, and the hint of horror lingering just out of view (see: The Haunting) to build tension and then deliver big scares. However, director James Wan, best known for the first and third Saw entries, doesn’t quite have the solid grasp on haunted house-style horror that’s needed to really knock this movie out of the park. Some shots and scenes telegraph what’s supposed to be scary, and a few music cues are just on this side of trying too hard. Wan is still largely successful in building a tense atmosphere and delivering some good shocks; one in particular at the halfway point builds so well and delivers one of the best money-shot scares that I’ve ever seen.

Unfortunately, that’s about where the great scares end. The movie switches halfway from scares made with atmospheric tension and surprises to in-your-face frights, and while the movie stays a little scary, it’s much less so during the second half. The film begins to show too much, giving full views of what was previously only hinted at, taking things away from the audience’s imagination and thus reducing the scare factor. A séance scene, instead of becoming a gauntlet of terror, feels like just a parade of ghost makeup and effects. And another scene near the end, without giving too much away, reveals a bit more of something big that had only been hinted at before and comes off as more comedic than scary, even if the scene is entertaining as hell.

Still, the good points of the movie far outweigh the bad. The cast is solid, especially the two geeky ghost hunters who show up in the second half and steal the movie. (Seriously, they deserve a spin-off.) Barbara Hershey even shows up as Wilson’s mom, a nod to her role in The Entity. The mixture of computer and practical effects is seamless, and there’s some startling imagery as well, from the look of some of the supernatural beings to the gadgets used by the ghost hunters. Overall, Insidious may not stand as a champion of the haunted house genre, but it’s certainly a worthwhile addition to the canon.