Layla Caraway wasn’t very political prior to the summer of 2007. The Haltom City resident and her husband had purchased a home in the inner-ring suburb four years before that summer, moving back into the city where she was raised. They had a nice patio that looked out on Big Fossil Creek and enjoyed the comfortable backyard with their two dogs. 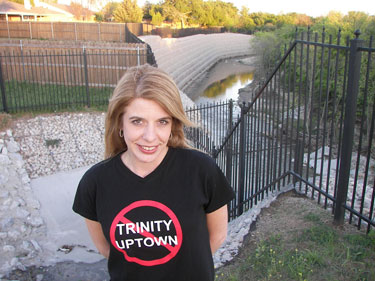 Then the rains came. In June, a 4-year-old girl was ripped from her mother’s arms in Haltom City in a flood at a mobile home park along Whites Branch creek. By July, 45 feet of Caraway’s backyard had collapsed into the creek. There were worries that the home on Fenway Court might eventually wind up in the water as well, and Layla and her husband were forced to move in with her parents.

Fast forward to this year: Caraway has written and co-produced Up a Creek, a documentary based on her Haltom City flood experience. Through exhaustive research and her experience working with various government entities, Caraway focuses on how the U.S. Army Corps of Engineers, over more than four decades of studies, had identified the Big Fossil Creek watershed as a serious flooding problem area but could not come up with the $6 million to fix the problem.

The main focus of the documentary, however, is how the Corps had found nearly $500 million to do the Trinity River Vision plan just north of downtown Fort Worth. Though touted as a flood-control plan, the TRV is more of an economic development initiative, designed to reroute the river and create a mixed-use urban development with river access. The documentary also asks why the Corps still can’t find the measly $6-8 million for their portion of flood control in places like Haltom City. (In 2001, voters there approved funding the other half of the estimated $12-14 million project.) The local money still sits in the Haltom City coffers waiting for the Corps to find their funds to even start the project.

The Corps has repeatedly told Haltom City they don’t have the money because of budget cuts for the Big Fossil Creek flood-control project, even though studies have identified the flooding problems and Haltom City has their share for the project. These issues were examined in a Fort Worth Weekly cover story, “Deep Waters,” in August 2007.

“I just thought it was the time to share what I have learned abouimt this issue and to get people who have studied the TRV extensively to share what they have learned,” said Caraway, 37, an office manager. “People need to learn what is happening with their tax money and their property.

“It is arrogant to think that massive flooding won’t happen again in places like Haltom City and Arlington, and no one is doing anything to fix the problem,” she continued. “We keep adding new development along these creeks and tributaries, and the water has to go somewhere. But the money we are spending on the premise of flood control is in downtown Fort Worth, which has no flooding problem.”

Caraway enlists the help of a wide variety of citizens who have long opposed the TRV project over the years. They cite out-of-control costs (the TRV is now budgeted at $900 million, more than double the original estimate), the use of eminent domain for private development, and the possible shift toward more local funding as the federal money dries up.

Longtime Democrat and insurance executive Don Woodard Sr. calls the TRV “pseudo flood control” in the film and compares the local politicians advocating the project to bank robbers like Bonnie and Clyde. “[The politicians] are coming to the taxpayers and are telling them ‘We need that money of yours more than you do,’ ” Woodard says. “That’s what the TRV is. It is a robbery of our money.”

Former Tarrant County Republican Party chair Steve Hollern questions why the Tarrant Regional Water District, whose primary function is to provide fresh water for residents in local cities, is taking such a lead on the TRV. “I don’t see what a little town lake in downtown Fort Worth is going to do to get water for Fort Worth residents, which should be [the district’s] sole purpose,” Hollern says in the film.

Tarrant County Libertarian Party chair John Spivey has problems with the issue of eminent domain in acquiring property for the TRV. “This is all about re-gifting land to those with political connections,” Spivey says. “That’s not what eminent domain is to be used for.”

Former Fort Worth city council member Clyde Picht calls the TRV a “first-class pork project boondoggle.” Former Fort Worth mayoral candidate and local activist Louis McBee refers to the TRV as “Lake Kay Granger,” referring to the local congresswoman who has backed the project from the beginning and who is the point person to get federal funding in Washington. McBee added that the TRV is “not solving a flood problem but creating one for the [downstream] East Side.”

Most of the people interviewed in the film are active in the Trinity River Improvements Partnership (TRIP), which advocates an alternative plan that would widen the river channel near downtown for about $60 million. TRIP, started last year, has hosted several forums in recent months and has leadership that includes Democrats, Republicans, Libertarians, and Tea Party activists.

TRIP also makes for some odd alliances. Spivey, the Libertarian, cites the environmental problems with downstream flooding that he thinks the TRV will cause and how TRIP needs to listen to the views of environmentalists. “Regardless of which end of the political spectrum you reside on, we are finding there is some part of [the TRV] that people hate,” he said.

The next showing of Up a Creek will be at 6:30 p.m. at the next TRIP meeting, Wed., Apr. 13, at the Elks Lodge, 3233 White Settlement Rd. The screening will be free, and Caraway said that TRIP will screen the film to any local groups or neighborhood associations that ask.

Caraway, who serves on the Haltom City planning and zoning board, said she did not create the film for personal political gain, though she said she has been asked to run for council in Haltom City by numerous business leaders.

Up a Creek puts a face on the issue of flooding in Tarrant County and how money cannot be found for real flooding problems but hundreds of millions can be found for a project with very little of a flood-control component.

Actually, the film puts two faces on the issue. One is Caraway herself. The other is the 4-year-old who drowned in the summer of 2007, Ally Collins. The little girl’s picture appears several times in the film, and her death started Caraway’s trek into the filmmaking world.

“Ally was ripped from her mother’s arms in that flood, and when I heard about that and then went to the trailer park and saw all those people who lost their homes, it really got me to thinking,” she said. “Then a few weeks later, we lost our backyard, and our home was uninhabitable.

“It may have taken a long time, but we all felt we needed to make the decisions on the TRV more personal,” Caraway continued. “There is still no funding for the Big Fossil Creek flooding problem, and it’s been 10 years since Haltom City voters approved the tax increase for that project. But there is always money for the TRV project, and very few are questioning that.”