Gas drilling activists knew it would be an uphill fight this year to win any concessions from a conservative-dominated, business-oriented Texas Legislature, especially given the power of the gas industry lobby.


And indeed, not one of the three dozen or so bills sponsored this year by local legislators and others to strengthen health and safety protections for those in the vicinity of gas wells, pipelines, and other drilling-related facilities has yet been passed by any committee of either the Texas House or Senate.

“That may be right,” said State Rep. Lon Burnam of Fort Worth, who introduced eight bills on gas drilling. “Unfortunately, so many of my colleagues in the legislature are owned lock, stock, and barrel by oil and gas interests that they won’t even take time to read the bills.” 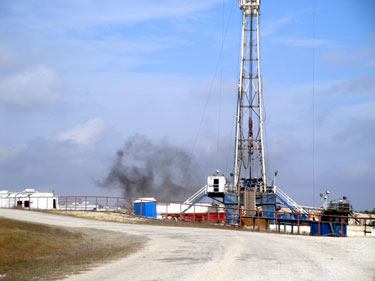 One of the bills Burnam introduced, HB 2001, would limit the tax exemption for high-cost gas well drilling. The exemption was put into place more than a decade ago, when hydraulic fracking of wells was a relatively new and expensive operation. In the last several years, however, fracking has become a standard operation, Burnam said, and it’s time to end the exemption, which costs Texas roughly $1.2 billion annually.

His bill went nowhere, but the measure was resurrected as an amendment to the House Appropriations Bill. It was quickly ripped out of that bill as well, the Fort Worth Democrat said. “We are leaving $1.2 billion tax dollars on the ground annually in these exemptions, and no one in the industry wants that studied to see if we should make adjustments in our tax collection policy.”

He still holds some hope that the measure might be revived. Some Republican legislators were interested, “because we’re leaving so much money uncollected,” Burnam said.

Of the eight safety-related bills he introduced, only one has a decent chance to pass, he said. That one deals with the authority of cities to regulate pipeline routing. “I think that has a 50-50 shot at becoming law,” he said.

Some of his other drilling-related bills would have set a minimum distance between certain classes of gas pipelines and inhabited buildings, set a statewide setback of 1,200 feet between gas wells and public school property boundaries, and required gas operators to use vapor recovery systems — called green completions — to minimize the emissions of poisonous substances.

Esther McElfish, director of the North Central Texas Communities Alliance, agreed that the pipeline routing bill still has a chance. “Lon has gotten tremendous support for that bill,” she said. “It would essentially put into law what is already available to cities via home rule law. The problem is that municipalities have been bullied by the threat of lawsuits by gas companies up until now. But if this Burnam bill can pass, it will make clear that municipalities can dictate where pipelines go, rather than gas companies.”

Time is growing short — but local legislators and activists said this week they still see a chance for a couple of other measures that would help protect citizens from the problems associated with gas well drilling, particularly in urban areas.

State Sen. Wendy Davis introduced 14 bills on drilling this session, including one that would force gas companies to disclose the chemicals used in hydraulic fracking. Anthony Spangler, Davis’ communications director, said that several of the bills have “some industry support” and that she is “hoping for a hearing on all 14 of them.”

However, even if the bills are heard in committee, that probably will come too late to give most of them a chance to pass this session.

“If you have not had a hearing by April, it’s a good sign that the committee chair does not have your bill on his or her priority list,” said Craig Adair, Burnam’s chief of staff.

Sharon Wilson, Texas’ coordinator of Earthwork’s Oil and Gas Accountability Project and a longtime advocate of responsible gas drilling, said  gas company lobbyists  are making sure that bills that will affect their industry are buried.

“The Texas legislature is controlled by oil and gas interests,” she said. “So while there are some really good bills out there that could help people, none are getting much traction. Burnam’s bill on the placement of pipelines and compressor stations being put in the hands of municipalities is really good, but then it’s hung up in committee. Wendy Davis’ frac fluid disclosure bill, while it could use some strengthening, is being ignored by the industry in favor of Rep. James Keffer’s disclosure bill, which has a huge loophole allowing gas drilling companies to avoid disclosure if they claim proprietary interest in those fluids.” Keffer, the chair of the House Energy Resources Committee, represents a district that includes Brown, Eastland, Shackelford, Stephens, Palo Pinto, and Hood counties.

Only one industry spokesperson returned a call  seeking comment on the situation. Devon Energy spokesman Chip Minty wouldn’t discuss pending bills but said his company “is an active user of green completion technology in the Barnett Shale.” He pointed out a new web site created by the Interstate Oil and Gas Compact Commission — FracFocus.org — that allows oil and gas companies to voluntarily disclose the chemicals they use in fracking.

Activists believe that web site, which went online earlier this month, will undermine any legislation, including Keffer’s bill, that would force such disclosures as a matter of law.

“Sooner or later gas companies are going to have to divulge what the heck chemicals they’re using,” said Gary Hogan, who served on both of Fort Worth’s gas drilling ordinance panels. “And they’re going to have to come to terms with other safeguards of the public as well. At least if they want to get into Pennsylvania and New York, because those places have not been as politically corrupted by oil and gas money as we have been down here in Texas.”

Lize Burr, coordinator for the Alliance for a Clean Texas, an activist coalition, still believes progress is being made this session. “We are light years ahead of where we were [two years ago] in terms of public awareness of the dangers of shale drilling,” she said. “Unfortunately, the situation in the Barnett Shale is two light years ahead of where we were then, too, and the concerns and dangers posed by the drilling in places like Fort Worth have reached a critical level with regards to health and safety.”

It was vital to have the Barnett Shale legislation introduced this year, even if most of it won’t pass, Burr said. “In the long-range view, there is now dialogue and conversation about these topics. That opens the door for them to pass in the next legislative session,” she said.

“The drawback is that in the short range, there are already a lot of people who have been negatively affected by the drilling, people who are already ill and whose safety has already been threatened. And those people don’t have the luxury of waiting to see if these bills pass two years from now.”