The number of CDs being produced by local artists on small labels or in home studios is both blessing and curse. It’s interesting to hear what seven gazillion different artists do with the same finite number of musical notes and words. It’s disappointing because so much of it sucks. 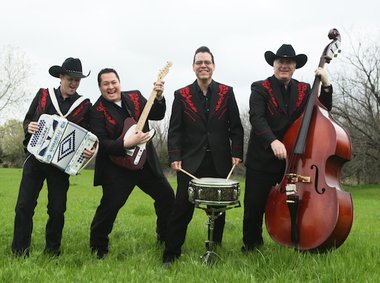 Listening to so many bad CDs over the years has made me a skeptical, heartless robot. I expect the worst when I hear a new disc. So I was confused when I listened to the title track from the Tejas Brothers’ Rich Man (Smith Music Group). My ocular organs burned. A strange liquid leaked out. I didn’t understand what was happening. Then I realized I wasn’t an android after all. I’d been moved to tears by a song written about an aging father, a former migrant worker without much in the way of material goods but one who takes comfort in knowing that “the love of my life is still right here by my side, and my whole family still thinks the world of me.” The song sneaks up on you. It’s the album’s final entry, and the preceding 12 cuts are mostly up-tempo, feel-good country songs embroidered by frontman Dave Perez’ comforting accordion and unaffected vocal delivery. The Fort Worth-based Tejas Brothers formed in 2006 and released their self-titled (and kick-ass) first album in 2008. Rich Man is the band’s sophomore effort.

The album gets off to a shaky start –– the opening strains of “Say It Again” are so reminiscent of “Little Sister” that they immediately took me out of the song. The dreaded D word –– “derivative” –– popped into my head, an adjective that usually ruins my listening experience. But after the first song, Perez and gang hit an infectious and fun stride that carries the listener all the way to the touching and surprising final song. Don’t let their name fool you –– the Tejas Brothers lean far more heavily toward honkytonk than Tejano, although Perez’ accordion lends a Spanish spice to everything. Sometimes he veers from country to Tejano to blues all in the same song, such as on the fantastic “Long Way to Texas.” Perez wrote all the songs and obviously had fun, combining agreeable melodies with affable lyrics to set an ideal mood for kicking back, drinking beer, taking a turn on the dance floor, and singing along to the choruses. Inspiring listeners to do all that isn’t easy, particularly with so many robots among us. –– Jeff Prince

You might say Johnny Wenger’s a walking contradiction, a scowling, heavily tatted and pierced frontguy for a raging hardcore punk band who’s also put in 20-plus years at a straight job and served with his wife on the PTA at their daughter’s school. Fact is, Mr. Wenger is one of the most upbeat folks you could hope to meet, and, yes, he fronts China Kills Girls, a relatively new Fort Worth band that’s building a fanbase the old-fashioned way, by constantly hitting stages in rock clubs, sports bars, and DIY metal spaces from one end of our fair city to the other.

The musos –– guitarists Chris Carriker and Mike Norcutt, bassist Angela Westendorf, and drummer Jake Norgaard –– play it like they mean it, and Johnny’s the real deal, shouting himself raw to let us know what’s on his mind (and, in live settings, doing his thing barefoot). Collectively, they’re masters of dynamics. Their song structures contain more twists and turns than a labyrinth. It’s amazing how many stops, starts, and tempo changes the musicians can negotiate in such brief intervals without ever losing the exhilarating rush of forward momentum that is punk’s hallmark.

Truth be told, while they self-identify as “hardcore,” they touch on myriad stylistic referents, although “Morning After Pill” moshes along to the classic punk polka, and the ode to excess, “All You Can Eat Enchiladas,” is a spiritual descendent of Black Flag’s “Six Pack.” “Eternal Sleep” could be a pop-punk anthem if it had been sung by some callow youth lyrically obsessed with grrrls. The guitars on “Betrayal” echo Tony Iommi’s on Sabbath’s Paranoid, while Johnny’s vocal performance recalls the growl of Carl Pack when he used to front The Gideons, and the melodic, piercing opening riff to “Fuck Machines” sounds like the mutant spawn of the guitar intro from Status Quo’s “Pictures of Matchstick Men.”

Ultimately, it’s Johnny’s creepshow theatrics that make the most impact here. He rants like a pro wrestler on cable TV, personifying a stalker’s menace on the opening “Bill” and portraying a suicide victim on the album’s tour de force, the closing “Pull It.” But always lurking beneath the phlegm and bile is melody, much to Johnny’s credit.

As one who’s grown weary of hearing about people I know who took themselves out, I found that song quite a harrowing listen. But to China Kills Girls’ credit, there’s no phony glamour in their depiction of the protagonist’s self-destruction –– just an empathy that’s all too uncommon in hardcore. –– K.S.

After years eking out a living as a musician in Nashville, Travis Vance has released his first EP, The Chase. The Berklee grad and Fort Worth native has played in various bands and clocked a lot of time as a session player, equally at home with jazz, country, and rock. But for his solo debut, an all-instrumental effort, Vance has chosen to explore the five-string bass. Don’t assume, though, that The Chase is full of mind-bending pyrotechnics or, for that matter, is a boring academic exercise. The ethereal, many-layered soundscapes that he creates across the disc’s five cuts are just as much excursions in minimalism as in pop, making his technical prowess go down easier. (There’s a video online of Vance onstage priming his audience for an untitled foray into looping, something akin to “a Steve Reich song [with] the drums to [The Outkast’s] ‘So Fresh, So Clean.’ ”)

Though some of the effects pedals and electronics complicate the overall feel, it’s through his own musicianship that the versatility of the bass shines. Vance hits upon the right ingredients with “I Stole Your Girlfriend’s Bike,” characterized by a joyful swelling at one point and deft fingerwork throughout. The other real standout is “Soukou Hero,” the record’s closer, a pleasant Afro-pop jaunt.

Vance is on weaker footing elsewhere. “After the Flood” carefully builds an ambient mood but fails to deliver. The title track vaguely recalls both “Message in a Bottle” and Paul Simon’s “Can’t Run But,” without the urgency or suggestion of either.

As Vance’s first solo outing, The Chase provides a taste of his skills as a performer and composer, sampling just a few of the modes that interest him. As such, there isn’t much flow to the EP, but at just a little longer than 20 minutes, it doesn’t wear itself out –– indeed, thoughtful listeners may be left wondering what Vance will do next. –– Zack Shlachter