Wedding season is upon us. Can you stand it? After the big blowout nuptials in London dominated our TV screens last week, we have two movies about weddings this week, and next week another one arrives. (That’s the best one, by the way. Stay tuned.) I’ve left others to critique the British royal wedding. My job is to pick through the cinematic weddings and report back, and I’m pleased to find that one of them is worth your time. 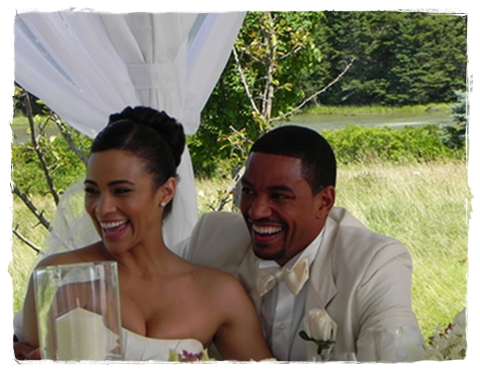 While Tyler Perry has had the religiously inclined African-American moviegoing audience under his spell for some time now, Dallas-based minister T. D. Jakes has been trying to tap into that same crowd for almost as long. His novel Woman Thou Art Loosed was made into a film in 2004, and he took a more active role in the 2009 big-screen adaptation of his novel Not Easily Broken, writing the screenplay and serving as producer. Neither of those films drew anything like the audience for even Perry’s least successful film projects. That may or may not change for the comedy Jumping the Broom, on which Jakes is only a producer with a cameo acting role. All I know is, it’s a better movie than anything Tyler Perry has ever done.

We begin with Sabrina Watson (Paula Patton), a successful business executive who, after one too many unsatisfying one-night stands, promises God to maintain her chastity until she’s married if He’ll just present her with the right man. That is Jason Taylor (Laz Alonso), who hits Sabrina with his car — at very low speed, you’ll be glad to know — and promptly falls in love with her so swiftly that the two don’t have time to meet each other’s families until just before the wedding. That’s where things get rough, as Jason brings his mother Pam (Loretta Devine) and various other relatives to the Watsons’ sprawling estate on Martha’s Vineyard to get acquainted.

The movie is driven by the tension between the wealthy Watsons and the working-class Taylors, which surfaces as an unspoken subtext in scenes like the one when Jason’s cousins tease him about Sabrina’s habit of constantly calling him when they’re apart, wondering if she’s going to become one of those wives who freaks out if her husband doesn’t pick up the phone every five minutes. There’s some snobbery emanating from the Watsons, but the biggest issue is the reverse snobbery coming from Pam, who seems determined not to give her son’s rich future in-laws a fair shake. While most of the Taylors happily soak up the atmosphere — Pam’s best friend Shonda (Tasha Smith) says, “It’s summer at the Vineyard. I’m looking for Barack and Michelle!” — Pam stews over real and imagined slights before discovering a skeleton in the Watson family closet and threatening to blow up the wedding.

A longtime TV director making his feature film debut, Salim Akil manages all this fairly smoothly. He fails to reap any laughs from Sabrina’s no-sex pledge, but he avoids dead spots and makes the script’s points without turning preachy. There’s a tasty romantic subplot between Shonda and Jason’s cousin Sebastian (Romeo Miller, the rapper formerly known as Li’l Romeo) who’s much younger than she is. The scene in which Jason finally stands up to his mama is gratifying when it arrives, and Alonso sells it by looking deeply hurt as Jason tells Pam not to make him choose between herself and his fiancée. Also of note: Sabrina is more successful professionally than Jason, and while this occasions some murmuring on his side of the aisle, it’s refreshing to find that both he and the movie are fundamentally OK with it. You’re unlikely to find that attitude in a Tyler Perry film.

The actors are lively and well-chosen enough to make up for the flavorless leads: Broadway veteran Brian Stokes Mitchell makes a sharp impression as Sabrina’s starchy dad, CSI alumnus Gary Dourdan shows some unsuspected sex appeal and comic flair as a catering chef who keeps one eye on the single women at the wedding, and Mike Epps is unexpectedly good as Jason’s uncle who’s the only family member capable of reasoning with Pam. Jumping the Broom is no comic masterpiece, but between these performers and the movie’s construction and generosity of spirit, it’s a much better bet than the other wedding comedy out this week.

Like the Emily Giffin novel that it’s based on, Something Borrowed begins with the main character sleeping with her best friend’s fiancé. And feeling only mildly guilty about it later. And feeling somewhat guiltier over the fact that she’s not consumed with guilt. This potentially explosive scenario is a great place for a romantic comedy to start. Stunningly, it goes nowhere.

The main character is Rachel (Ginnifer Goodwin), a single New York lawyer who has just turned 30 and is feeling stressed about both her age and her friend’s impending union with a guy that Rachel had a crush on first. The fiancé is Dex (Colin Egglesfield), a scion of wealth who went to law school with Rachel and isn’t sure he wants to be going through with the wedding two months hence. The best friend is Darcy (Kate Hudson), a narcissistic attention hog who takes everyone for granted, so no wonder she remains clueless when Dex and Rachel decide that their one-night stand isn’t enough and embark on an affair.

At the risk of sounding like a hack stand-up comic, who do you root for here? Rachel would seem to be the most sympathetic party, having been overshadowed her entire life by the prettier, luckier, more popular Darcy. Yet Rachel’s such a doormat that she quickly becomes aggravating. Dex is similarly weak, and though the script tries to give him reasons for vacillating, they make no sense. Why does his upper-crust dad pressure him to pick Darcy over Rachel, saying “This isn’t who we are”? (It’s not as if Darcy’s royalty, after all.) As Dex and Rachel fall in love, you can’t help but reflect that if Rachel had been up-front about her issues with Darcy, she could have gotten the guy without burning her oldest pal.

The film eliminates so much of the book’s backstory that we don’t believe Rachel and Darcy as friends. Their choreographed dance routine to Salt-N-Pepa’s “Push It” isn’t enough to make up for the lack of rapport between the actresses. There’s no chemistry between Goodwin and Egglesfield, either. John Krasinski is best positioned to walk off with the movie as Rachel’s platonic friend who figures out what she and Dex are doing. Yet while he’s funny, his character is a composite of several in the book and comes out as an indecipherable mess. Late in the film the character has to confess to being in love with Rachel himself, and you feel sorry for the actor who clearly has no idea how to play the scene.

The scenes late in the film all fall into one torpid rhythm, and Alex Wurman’s tasteful string music kills any kind of mood that the movie might be going for. Director Luke Greenfield doesn’t capture any of the illicit thrills in Rachel and Dex’s sneaking around, nor does he convey the accompanying fear. We don’t even know what these people plan to do if they’re caught, which makes it seem like they don’t care about Darcy at all. Self-absorbed though she is, we don’t hate her enough to feel as if the betrayal is something that she deserves. If the filmmakers had had the guts to make any one of these characters truly awful, we’d have a better idea of what to feel about this story. The only sure thing is, Something Borrowed is a pretty bad movie.