Our 14th or 15th Annual Fort Worth Weekly Music Awards are right around the corner. The ballot will be published online and in print on May 25, and voting will end on the day of the free 50-band festival, Sun., Jun. 26. As usual, the ballot was created from nominations from local club owners, producers, booking agents, media types, and other members of the local music cognoscenti. The 2011 ballot will include several new categories, including best bassist, best drummer, and best guitarist. Adding categories means more nominees, which, in turn, means more festival performers. Two venues, The Grotto and Magnolia Motor Lounge, have been added, giving us eight in all. 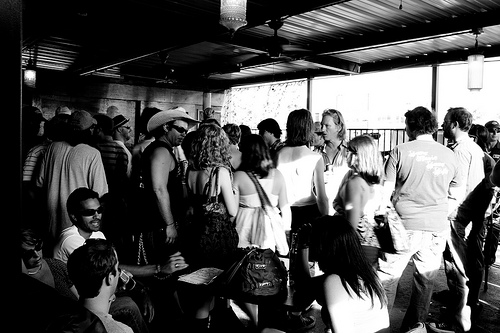 The other venues are holdovers from last year: The Backyard at Capital Bar, Fred’s Texas Café, Lola’s Saloon, Poag Mahone’s, The Pour House, and 7th Haven. Last year, with six venues and 36 bands, nearly 7,000 people spent the day with us. We expect even more foot traffic for the 2011 event. Artists confirmed to perform include Calhoun, The Burning Hotels, The Orbans, Whiskey Folk Ramblers, Spoonfed Tribe, Josh Weathers and the True+Endeavors, Quaker City Night Hawks, American Idol semifinalist Tim Halperin, The Cush, Stella Rose, Pinkish Black, Fate Lions, The Hanna Barbarians, KatsüK, Holy Moly, Luke Wade & No Civilians, Chatterton’s Kevin Aldridge, Clint Niosi, Sean Russell, Phantom Caste, Titanmoon, Dru B Shinin’, JJ & The Rogues, Stoogeaphilia, Beauxregard, Alan, Pablo & The Hemphill 7, Bravo Zulu, The Spiral Sound, Jefferson Colby, Villain Vanguard, The Hendersons, and Derek Larson & The Leavers. Yes, every band is from Greater Fort Worth. The rest of the lineup will be announced soon. About a week before the festival, copies of our annual Music Awards compilation CD will be available for sale –– all proceeds will benefit a local charity. The 2011 version of Live in Studio will feature music from select nominees, including Quaker City Night Hawks, The Hanna Barbarians, Stella Rose, Fate Lions, The Cush, Luke Wade, My Wooden Leg, Telegraph Canyon’s Chris Johnson and Tamara Brown, The Hendersons, Bravo Zulu, The Spiral Sound, Derek Larson & The Leavers, and others. Tracks will be laid down at Eagle Audio Recording on Sat., May 21, and Sun., May 22. To be a part of the studio audience on the day of your choice –– and to partake in the free beer and snacks that we provide –– e-mail me at hearsay@fwweekly.com with the correct answer to the following trivia question: Which Matt –– Hembree or Mabe –– is in more bands? (If you are affiliated with the Weekly, please do not respond. You’re already invited.) If you can name all the bands of the Matts in question, you can attend both days. The fifth e-mailer with the correct answer will win admission for two. Put “Matt Attack” in the subject line. … As the Weekly does every year around Music Awards time, we will induct another class of legends into the Fort Worth Music Hall of Fame, a metaphoric institution dedicated to 817-born or -raised musicians who’ve had an impact on the national consciousness. Hall of Famers include Stephen Bruton, Robert Ealey, Ornette Coleman, Ronald Shannon Jackson, Doug Ferguson, Q.T. Tubb, and many more. Members of the 2011 class will be announced on the day the ballot is published.