Although alt-folkies Earthquake Country played their first live show only last Friday night at The Moon, you’d think they’d been together forever by virtue of their quietly confident debut album. The 13 songs on Diaspora were written by singer-songwriter-guitarist Jason Worley and fleshed out by a terrific group of musicians who work with other bands.


Violinist Tamara Brown and bassist Chuck Brown play in Telegraph Canyon; drummer Brian Shaw performs with the Transistor Tramps; and lap steel player Mark Mauzey and pianist Stephen Wettermark played with the now-defunct Yacht to Dementia. As Earthquake Country, their sound is an intriguing blend of the roadhouse and the coffehouse. Best of all, it seems to inspire new heights of poetic abundance from Worley the lyricist. 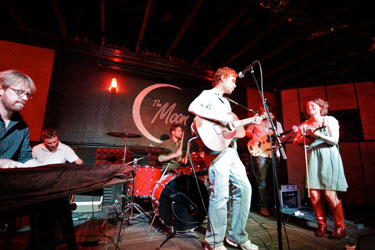 “We started off as musicians working on a project,” said Worley, 28 (and a Fort Worth Weekly employee). “But if it works out for everybody –– as long as everybody’s having fun being creative together –– then we’ll keep playing.”

Diaspora marks the continuing evolution of Worley as both a singer and songwriter. His 2009 acoustic solo effort, The House of the Place of the Sun of the Moon, was filled with stark, potent images; weary and poignant harmonica flourishes; and more than a little Dylan worship. The Dylanisms continue on the new songs, but Worley sounds more relaxed, more emotionally centered, and more diverse in his musical moods. The selections range from the jaunty absurdism of “Lincoln’s Abs” to the woeful “Might Get Killed,” which seems to equate the end of a friendship or a romance with death itself. Worley is most at home expressing a kind of bemused ambivalence. The song “Get Blue” nicely captures a mind that refuses to be made up: “If I was angry / I could scream / If I was peaceful / I could rest / If I was funny / I could breathe distractions with my breath.”

Worley had known Mauzey and Wettermark for many years and recently began playing with the Browns just for kicks. He finally asked all of them plus drummer Shaw to come together and make an album with him, and, luckily, the schedules fell into place. Diaspora was recorded live (with a few subsequent overdubs) over one long evening at Eagle Audio Recording on the South Side. Worley describes the often cryptic tunes as “incredibly personal to me” but doesn’t elaborate on any events or situations that might have inspired them. However, he is very specific about the artists he was listening to at the time he wrote the songs: Townes Van Zandt, Ray Davies, The Stanley Brothers, Roger Miller, and Bert Jansch, the 68-year-old Scottish folk balladeer.

Worley said Diaspora is about “the daily ins and outs of trying not to go crazy –– to me, music is an outlet for the people who play it and the people who listen to it. It’s something that helps you escape the everyday dread.”

Earthquake Country will play a slew of North Texas clubs in the near future, but Worley, who is, by his own admission, an impatient artist, is already working on new songs that are capturing his attention. Though he enjoys connecting with a live audience, he prefers writing tunes to performing them. For him, songwriting indeed appears to be a survival strategy.

“Someone once asked me, ‘Why do you love music so much?’ ” Worley recalled. “I thought that was the silliest question I’d ever heard, but I didn’t have an immediate answer for it, either. It would take a lifetime of explaining.”