Well, crap. I had such high hopes for X-Men: First Class. The fifth entry in this loosely connected series features the return of Bryan Singer, the filmmaker behind the excellent first two X-Men movies, as a story writer and producer. It’s also directed by Matthew Vaughn, the British director who proved with last year’s Kick-Ass that he understands the appeal of superhero stories on a deep level. So imagine how disappointed I am to find this movie to be a scattered affair that loses power the more it tries to take on big issues. 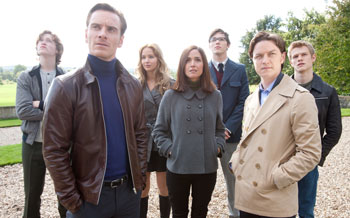 After a prologue that’s almost a carbon copy of the opening of the 2000 original X-Men film, most of the action takes place in 1962, as Oxford graduate student Charles Xavier (James McAvoy) conducts genetic research that, much like Alfred Kinsey’s, is driven by his desire to understand his own place in a world that prizes conformity. Charles can read minds and locate other people with superpowers like himself, but he’s devoted to keeping his nature a secret in a society that isn’t ready to accept “mutants.” That worldview clashes with that of Erik Lehnsherr (Michael Fassbender), a Holocaust survivor with powers over metal who wants to avenge his mother’s murder at the hands of Nazi scientist and fellow mutant Klaus Schmidt, a.k.a. Sebastian Shaw (Kevin Bacon, whose German is absolutely terrible, I have to say). Charles and Erik find common cause battling Schmidt, who engineers the Cuban missile crisis in an attempt to trigger a nuclear war that’ll destroy humans and create more mutants.

The film gets off to a great start. McAvoy’s melting charisma is a nice fit with the role of a cocky grad whose canned speech about genetic mutations allows him to pick up girls in bars. He’s complemented well by Fassbender’s fluid menace as a future supervillain who might yet be won over to the side of good, despite his murderous early barroom encounter with three Nazis hiding out in Argentina. The subplot involving Charles’ recruitment to the CIA by an agent (Rose Byrne) who stumbles onto the mutants has some tasty stuff, and Charles’ first batch of young superhero mentees is a lively bunch, including a kid whose throat can produce superhuman frequencies (Caleb Landry Jones) and a girl whose body art conceals a pair of fully functioning wings (Zoë Kravitz).

These characters are subsumed by Shaw’s labyrinthine dealings with world leaders, many of them involving his diamond-hard right-hand woman Emma Frost (January Jones). The action sequences, including a climactic set piece in the waters off Cuba, are done professionally but without any sense of wonder and terror. Worse, the emotions in the stories are all too often lost; Erik’s ultimate showdown with Shaw strains mightily for catharsis and misses. It’s a nice idea to see the young Charles, who hasn’t yet settled into his role as a guru for superheroes, making errors and mishandling some of his charges. Yet the rupture between Charles and Raven “Mystique” Darkholme (Jennifer Lawrence), a shape-shifting girl who’s practically a sister to him, isn’t fleshed out nearly well enough. The overarching theme of the X-Men series — that these superheroes are an oppressed minority debating the merits of assimilation and violent revolution — devolves here into so much time-wasting blather. These issues were handled far more subtly in Singer’s first two films and even in Brett Ratner’s maligned third installment.

It’s too bad, because the stuff that works here works really well. The montage of Charles training his first generation of superheroes is done niftily with split-screens borrowed from early 1960s cinema. Though Vaughn doesn’t bring the antic black humor of Kick-Ass to this thing, he scores a number of piquant jokes, one of which involves a surprise appearance by a familiar hero. Best of all is the subplot centering on shy, nerdy scientist Hank McCoy (Nicholas Hoult), a mutant whose attempts to normalize his appearance backfire on him. This awkward character and his burning need to look like other people is as tragic and compelling as any figure we’ve seen in the entire series.

These flashes of inspiration are enough to give us hope that the next film might be truly fantastic. So does the track record of other directors who got off to stuttering starts when they first took over big-budget superhero series and then made drastic improvements in their second movie at the helm. (Look no further than X2: X-Men United for an example.) Yet none of that comes close to mitigating the tantalizing yet maddeningly unfulfilled promise of this latest adventure.