So I’ve now seen two Woody Allen movies, the first being 1973’s Sleeper. I saw that when I was in high school, when the film was already nearly two decades old. The second is his latest, Midnight in Paris, and I can tell I’ve been missing the Woody Boat, because despite a few faults, the film is a fun little paean to an amazing city and the artists, poets, and authors who’ve called it home. Going in, I had no idea what to expect. Talk about a nice surprise. 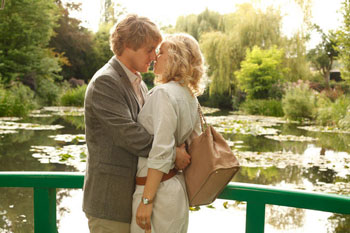 Owen Wilson stars as Gil Pender, who, with his semi-neurotic manner of speaking and messy blond hair, is one pair of thick frames away from being the film’s writer-director. (Allen, as I’ve discovered, is almost always the main character in his movies.) Gil is an aspiring novelist visiting Paris with his nagging fiancée Inez (Rachel McAdams), trying to gain inspiration from the city’s rich artistic history. One night while out for a stroll, Gil is greeted by an old-timey cab. A throng of partying passengers beckons him inside. They travel to a café, where Gil meets a couple who introduce themselves as Scott and Zelda Fitzgerald. After then being introduced to Ernest Hemingway, Gil realizes that he’s somehow been whisked to what he sees as a golden age, the time of the Lost Generation, when Picasso shows paintings at Gertrude Stein’s place, Cole Porter plays in swinging bars, and a gorgeous woman named Adriana (Marion Cotillard) flits among Picasso, Hemingway, and other greats of the era while also capturing Gil’s affection. Come daytime, he’s back in the present, but when the midnight bell tolls, the cab rolls back around to transport Gil to where he feels he belongs.

“I’m just a tourist,” he says during one of his nights out, which just about sums up the movie’s tone. From its relaxed beginning, showcasing various scenes of contemporary Paris over the course of a day, and set to a score of early jazz, the movie feels like an enjoyable vacation to the City of Light. Comedy, a sprinkling of moments of creative and personal angst, and a parade of famous faces bring the city and the movie to life –– Allen obviously has a lot of love for the place. Wilson also makes an entertaining avatar for Allen, playing out the filmmaker’s “what if?” daydream with zeal.

The actors portraying the famed Parisians only enliven things more. Kathy Bates brings brusque energy to her role as Stein. The best of the bunch is probably Corey Stroll, an actor who’s mostly worked in bit parts on TV. He plays Hemingway and steals every scene he’s in with unblinking machismo and gusto. (I won’t spoil the fun by telling who the rest are.)

There are a few weak spots in the cast, though, starting with McAdams, who portrays Inez as your typical spoiled American who can’t see past her own purse strings and doesn’t bring anything interesting to the role beyond being a harpy. The awesome Michael Sheen doesn’t do much, either, in the role of Inez’ supposedly erudite ex-flame living in Paris. Not that the writing helps them much. The two characters’ dialogue is often broad and obvious. During a rant in which Inez degrades Gil’s love of Paris, you almost expect her to say, “Have I mentioned that I’m a nag lately?” This also brings up another problem: When the movie shifts back to the present, it bogs down badly, forcing us to spend more time than we’d like with Inez and her clichéd, uncultured parents.

But all of that only makes the time spent in the past that much livelier. There the characterizations and dialogue help the movie breeze along. The pace becomes energetic, the cinematography of Paris intimate and impressive, and the laughs frequent.

Midnight in Paris isn’t going to make anyone decide to up and become an artist. But viewers who care at all about Paris or the famous denizens of that magical era will find this love letter of a movie to be time well spent.