If a Fort Worth native had slipped into a coma a few years ago and just awakened, he or she might be forgiven for thinking the West 7th Street development was a leftover hallucination. And what had all that glitzy development done to cherished independent eateries like Fred’s and Pop’s Safari Lounge? Oh — seems those hallowed places have actually benefitted from added foot traffic. Still, the new development is so corporate, right? So Dallas?

Well, somewhat. But another dining development has snuck into the West 7th corridor that is almost the antithesis of corporate-ness: the food truck. These mobile entrepreneurs are setting up shop … um, setting up wagon here and all over town. 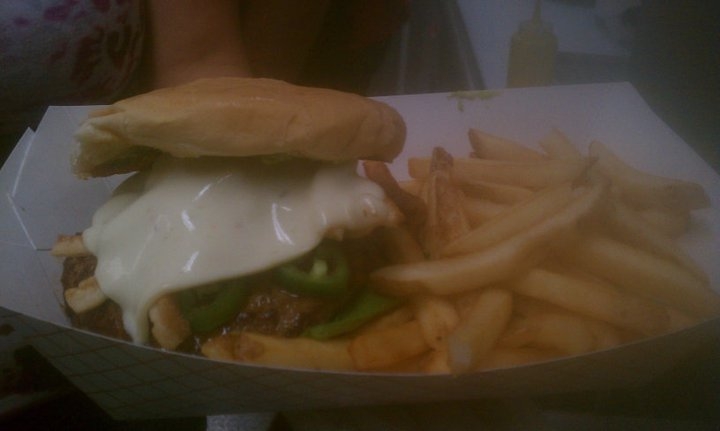 In West 7th territory, the Taco Heads trailer made the beachhead, next to the 7th Haven bar at the corner with Carroll Street. Now a second wagon, this one dark green, has penetrated farther into yuppie territory, selling burgers to the strolling masses.

The Trough Burger Wagon’s “dining room” consists of three folding picnic chairs. Like Taco Heads and Salsa Limon, the Trough has hitched its wagon, so to speak, to a bar — in this case, the Durty Crow — hoping to capitalize on the voracious appetites of area drinkers. Speaking on behalf of drunks and food cart enthusiasts alike, I was pulling for the Trough. I was in luck.

For such a little thing, the Trough has a sizable menu — not just burgers but hot dogs and sandwiches as well. When Chow, Baby asked for a recommendation, the nice guy at the window with his backward hat suggested the Texican ($7.50) and the Swiss-and-mushroom burger ($7). We ordered one of each, and he delivered them to us inside the Durty Crow.

Both burgers were good-sized, though not huge, the meat well spiced and the veggies fresh. The Texican is layered with guacamole, raw jalapeño slices, lettuce, tomato, and pepper jack cheese. On the Swiss-and-mushroom burger, the nicely sautéed ’shrooms and cheese provided a solid base for the evening’s liquor. The fries stole the show — fresh, skin-on, sea-salted, and wonderfully crisp.

The Trough’s burgers would hold their own against those in much fancier establishments. But I pondered a bit over the criteria. Do you hold food carts to the same standards as restaurants? As bars that serve food? Given the Trough’s bar connection, I thought it only fair to judge after a long night of drink. When we stumbled back outside to the Trough, Backward Hat encouraged us to try the four-cheese grilled cheese sandwich ($4.50) and the jalapeño-and-cheese hot dog ($2.50). The grilled cheese, which featured Swiss, pepper jack, American, and cheddar, was perfect, given the circumstances. The buttery bread and gooeyness of the sandwich were Grandma-good. The sausage on the dawg was stuffed with jalapeño bits and cheddar cheese, and the flavors exploded in Chow, Baby’s booze- and cigarette smoke-coated mouth.

The Trough nicely fills a niche. The fare won’t knock the Fredburger and other classics off their indie thrones, but as bar food it rates A-plus. And the cart is open ‘til the cows come home — meaning 2 a.m. or, as B. Hat said, “until the line is gone.” If you’re going to drink in a hallucination, eating at a Trough isn’t a bad follow-up.