There’s never a shortage of films about coming of age. Everyone comes of age, after all, and such films can often be done cheaply, like the three low-budget independent movies we’re reviewing this week. Two of them are worth your time, and one of them even demonstrates that coming of age isn’t limited to young people.

Submarine begins with a cheeky note from the movie’s main character addressed to American viewers, advising us that the story takes place in Wales, “which is located next to England, a country that you pretend to treat as an equal” and is famous for producing “Catherine Zeta-Jones, Tom Jones, and some other people.” There have been strangely few Welsh films for us to see. (How Green Was My Valley came out back in 1941, and it was made in California with a bunch of non-Welsh actors.) The country of Dylan Thomas, Christian Bale, Duffy, and a disproportionate number of world-class opera singers has exported far fewer films to us than Ireland, Scotland, and even Northern Ireland. Happily, this bright teenage saga goes some way toward redressing the balance. 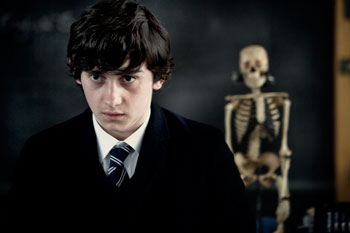 The aforementioned main character is Oliver Tate (Edward Gorey-eyed Craig Roberts), a 15-year-old growing up in the city of Swansea at some undetermined point in the recent past. He’s infatuated with Jordana Bevan (Yasmin Paige), a girl at his school who likes to strike wooden matches and stare at the flames. “She is moderately unpopular, which increases her chances of going out with me,” Oliver notes in his journal. With his parents’ marriage under strain, Oliver makes two resolutions: to lose his virginity to Jordana before he turns 16 and to prevent his mum (Sally Hawkins) from running off with a New Age self-help guru named Graham (Paddy Considine, sporting one of the fiercest mullets you’ll ever see in a movie).

Based on Joe Dunthorne’s entertaining comic novel, the film is adapted by Richard Ayoade, a first-time filmmaker who’s better known as an actor from the British TV sitcom The IT Crowd. The book is already structured in an unorthodox way and peppered with Oliver’s precocious teenspeak. (About a classmate who doesn’t react when Oliver jabs him repeatedly with a geometry compass: “His stoicism reminded me of the bravery of the men who died in the First World War.”) Ayoade ratchets up the quirk to ferocious Junoesque levels, sprinkling the story with visual gags and indulging in an elaborate freeze-frame when Oliver accidentally pushes a girl into a puddle. A romantic montage of Oliver and Jordana frolicking in an abandoned parking lot shows them setting a girl’s bicycle on fire. If Wes Anderson’s films irritate you, this movie will send you screaming from the theater.

I didn’t run screaming, because I’m pretty sure that I was like this when I was 15 and searching for an identity through eccentric behavior. Oliver reports, “I tried smoking a pipe. I tried flipping coins. I tried listening exclusively to French crooners. I even went through a hat phase.” As someone who once seriously considered wearing a straw boater everywhere, I feel for this kid. Oliver may be largely self-absorbed, but he’s observant enough to recognize when his dad (Noah Taylor) is having one of his fits of depression, and he’s clever enough to track the position of the dimmer switch in his parents’ bedroom to gauge the state of their sex life. When Jordana’s mother has a serious health scare and Oliver handles the situation poorly, the emotions bubble up through all the affectations and propel these characters into three dimensions. Submarine isn’t the great teen movie of our time, but it’s a loose, funny, and insightful piece from a neglected corner of the U.K.

If Submarine shows how to uncover a fresh take on teenage angst, The Art of Getting By shows how not to do it. This drama was originally entitled Homework, and though the new title is a vast improvement, it can’t begin to save this abysmal indie film.

The hero is George Zinavoy (Freddie Highmore), a senior at an expensive Manhattan private school who stops doing his homework because he’s become obsessed with death and the cosmic meaninglessness of existence. At least that’s the reason he gives; the movie suggests — or rather faintly whispers — that the real underlying cause is his parents’ marital and financial woes. His academic problems come to a head when his principal (Blair Underwood) issues an ultimatum that to receive his diploma, he must complete a year’s worth of assignments in the three weeks before graduation.

Granted, wallowing in self-pity can be enormously fulfilling, but George doesn’t do anything interesting with the time he spends not doing his homework. He treats his parents and teachers with a wholly unearned degree of intellectual condescension, and he behaves weakly and indecisively with Sally (Emma Roberts), a girl who has for some unfathomable reason taken a liking to him. It is possible to make a good movie with a teenage protagonist who’s this unappealing (see The Squid and the Whale), but this film seems not to realize what a humorless wet blanket George is. You start rooting for anything to happen that might shake him up. You want him to get laid or called out by some boorish classmate or smacked upside the head. He does get drunk halfway through the movie, but he manages to remain absolutely no fun. Whatever makes George into “the Teflon slacker,” as he describes himself, and whatever makes him change his ways, first-time writer-director Gavin Wiesen can’t render it convincingly.

The one thing that does kick this movie into life is Michael Angarano, exuding dissipated glamour as a professional artist who comes to school as a career day speaker and recognizes George’s talent for drawing. The character’s alertness and passion for his work, vividly and creatively embodied by the actor, are tonic qualities for a movie that’s too much in love with its main character’s petulant apathy.

Unlike the other two movies on this page, Beginners is a heavily autobiographical work by an experienced filmmaker. Before making his impressive feature debut Thumbsucker in 2005, Mike Mills watched his 75-year-old father come out as a gay man, prompted by the death of Mills’ mother, to whom he’d been married for 44 years. A few years later, he had to nurse his father through terminal cancer. Mills’ second film, Beginners, tells this story with all the names changed. The main character and narrator is Oliver (Ewan McGregor) and the father is Hal (Christopher Plummer). The narrative begins with Oliver sorting through Hal’s possessions after his death in 2003 and then skips backward and forward in time. Before, Oliver gets to see new sides of Hal, a Los Angeles museum director who’s at first liberated by single life as a gay man and then made vulnerable by his illness. After, Oliver is pulled out of his grief when he meets Anna (Mélanie Laurent), a French actress who lives at a hotel between jobs in New York and Europe.

The romance is, sadly, the weakest part of this movie. The star of Inglourious Basterds, Laurent is dewy and winsome, but she and McGregor don’t have an overabundance of chemistry. The attempt at a meet-cute at a costume party, with Oliver dressed as Freud and a laryngitis-afflicted Anna in man-drag, comes off as twee. The only relief comes from Hal’s highly neurotic Jack Russell terrier, who comments on Oliver’s love life via subtitles that apparently are visible to Oliver as well as to us. Revealing the dog’s thoughts in this way makes the lines funnier. Nevertheless, dialogue doesn’t appear to be one of Mills’ strengths, and the bland writing infects not only the romantic subplot but also the strained interactions between Oliver and Hal’s young boyfriend (Goran Visnjic).

Much better stuff comes out of Oliver’s relationship with Hal, which is something we haven’t really seen in a movie. A septuagenarian coming out of the closet has a much different perspective than a teenager doing the same thing. In this story, Hal’s coming out is a way for Oliver, who’s previously seen Hal as a remote and often absent figure, to finally get to know his father. The drama could easily become waterlogged, but the actors are surehanded. The proceedings are further dried out by Mills’ interludes that use stock photos and Oliver’s voiceover narration to capture the culture in different periods. (“This is what the sky looked like. This is the president. This is what happiness looked like.”) It all makes Beginners a drama whose modest charms encourage us to overlook its shortcomings.

The Art of Getting By