I read somewhere that household pets live longer if you get two of them. I hope the rule applies to sushi restaurants, because Magnolia Avenue just got two pretty good ones. Though Temaki Sushi and Shinjuku Station are both Japanese and both housed in the old, narrow brick buildings typical of Magnolia, the two couldn’t be more different.


Temaki (1504 W. Magnolia Ave.), which opened in mid-March, is an informal sort of place. You order at the counter, from a menu posted overhead, and fill your own (non-alcoholic) drink cup. The décor is modern — like if Ikea had a Japanese restaurant catalog — rather than sexy, and it’s shockingly inexpensive for a sushi place. Chow, Baby and guest got out of there with full bellies for less than $35. 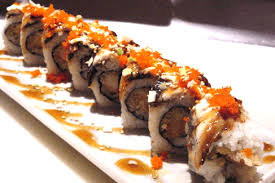 Highlights were the White Dragon Roll ($9), which featured asparagus, shrimp, white tuna, and a teriyaki drizzle. The pork and cabbage pot stickers ($3) were served with a soy, lemon-based secret sauce that I could have drunk out of a flask for the rest of the night. The tasty Hawaiian Rice Squares ($9) with salmon and brown rice fell apart at the slightest nudge from our chopsticks — but we didn’t mind scooping with our fingers. (I’d never, on pain of starvation, touch a fork at an Asian restaurant.)

Shinjuku Station (711 W. Magnolia Ave.) is industrial to Temaki’s retail — exposed brick walls and air ducts, concrete floors, a fire-engine-red inside door (non-functioning, but cool-looking), and an iron stairwell visible from the dining room. The patio entrance has an almost British country charm, in stark contrast to the postmodern interior.

The décor was an accurate predictor of the refined cuisine, which Chow, Baby learned is known as izakaya fare. Our server’s explanation: It’s an upscale Japanese pub with an extensive wine and saki list and food presented family style — though not like Grandma would have done. It’s more like a tapas concept, but without all that saffron. The restaurant is still in its “soft” opening, and won’t go “grand” for another couple of weeks.

The appetizer of shishito peppers ($4) was served roasted and salted, without sauce or additional spices. The taste was subtle: Imagine a jalapeño cousin who left town for grad school and came back home wearing a tweed jacket. It was simple, elegant, and emblematic of a chef who knows when to get out of the way of a stellar ingredient. But it was the sashimi Japanese snapper ($15) that stole the show. The fish was bright, fresh, and topped with the perfect amount of roasted garlic, which drew out the delicate flavor without overpowering it. The okonomiyaki ($7) or Japanese pizza   is served with pork belly, cabbage, and, for an extra $3, Kobe beef sausage. Bonito fish flakes made the top of the pizza come alive, as though it were dancing for us. The taste was sweet, but a consistency closer to omelet than pizza made chopsticking darn near impossible. (Being a purist has its price.) The service at Shinjuku Station was professional and pleasant — our server boasted some serious menu knowledge.

At both places, the owners were present in the dining room, a good sign. My hope is that the two don’t develop some kind of Jets-Sharks rivalry — they’re different animals, and there’s room enough on Magnolia for both. Like a good pet owner, I plan to lavish attention on both in hopes that I will get to see them grow old together.