At first glance, psychologist Dr. Steven Vazquez’ office in Bedford looks like an ordinary therapist’s room — quiet and dim, tasteful paintings and diplomas on the wall, and unremarkable furniture.


OK, so the roughly 2-foot-tall black box, with a light built into its back wall, is perhaps a little curious. But the chair placed in front of the apparatus, waiting for an occupant, looks like it could have come from the set of Star Trek.

“It sounds kind of woo-woo-ish,” said Gay Jurgens, a licensed clinical social worker and marriage therapist in Dallas. “But I’ve gone from being a skeptic to a very interested and supportive observer.” 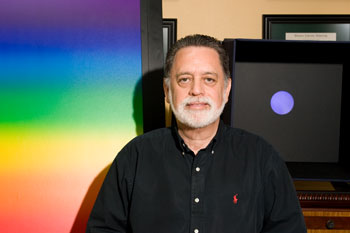 What Jurgens is so supportive of is something called emotional transformation therapy or ETT, a technique that Vazquez developed in 1991, trademarked, and has since used to treat thousand of patients. He essentially combines traditional talk therapy with the use of color to treat physical and psychological ailments like depression, trauma, and chronic pain.

Not surprisingly, Vazquez meets with a lot of skepticism from patients, the public, and others in his professional community when he talks about ETT. He believes his technique works faster and better than the drugs that are frequently prescribed for those conditions. In the last two decades he has trained about 200 therapists to use ETT in their work.

Vazquez explained that light affects emotions in many other ways. The brain converts light into neural impulses that travel throughout the brain and nervous system. About two-thirds of a human being’s brain cells are involved with visual stimuli, he said.

Light therapy itself is nothing new to the field of psychology. Vazquez said ETT is different in combining talk therapy with precise wavelengths of light — that is, very specific gradations of color — to target specific parts of the brain, including the centers that have to do with emotional and physical pain.

“I haven’t used anything but ETT for my arthritis pain for the past year, and today, I have very little pain … it’s amazing.” said Susan Ellis, a licensed marriage and family therapist and ETT-trained specialist in Carrollton. She said that the neural pathways between pain and emotion overlap, which is one of the reasons that ETT works.

Vazquez said that arthritis is heavily related to stress, which helps explain why Cymbalta, a drug promoted for treatment of arthritis pain, is actually an antidepressant.

Restless leg syndrome (RLS) is another physical manifestation of stress and anxiety. Connie Heaps had suffered from an extreme form of RLS for a decade, slowly increasing prescription medication levels until she had maxed out on the dosage.

“I wasn’t sleeping at all,” she said. “It was horrible.” About a year and half ago, she came to Vazquez as an ETT research volunteer and was treated every day for three weeks. “I had fabulous results,” she said. “It was remarkable. I didn’t think ETT could help, but it did.”

Not only did Heaps feel the results physically but she saw scans, taken before and after treatment, of her basal ganglia, the part of the brain responsible for anxiety and coordination of movement. The scan showed a reduction in the amount of blood flow to that portion of the brain after three weeks of treatment. Today Heaps is still symptom-free without the use of drugs. “I keep thinking it’ll come back, but it doesn’t,” she said.

Jurgens doesn’t use ETT in her practice. But she said she hasn’t heard any negative reports on the therapy. She believes the science behind it is solid, though Vazquez has never had the funding for clinical trials of his technique. “It sits real well with a lot of what we’re learning with the new brain science — stimulating unused neural pathways with the use of light,” she said.

Dr. Laura Howe-Martin, a psychologist at University of Texas Southwestern Medical Center, said that, without extensive empirical data or clinical trials, there’s no way to know whether Vazquez’ system really works — or, more specifically, whether the light therapy is having a beneficial effect separate from that of the talk therapy. She acknowledged that the cost associated with clinical trials is a major reason that independent clinicians find it so hard to get new techniques accepted by the scientific community.

Back in Vazquez’ office, I agreed to undergo a little ETT myself. We agreed to work on a particular dilemma that was causing me a lot of anxiety, involving an important decision. I had three courses of action to choose from.

I sat in the chair in front of the light box. Vazquez turned it on and began to adjust the color of light it emitted, beginning with a bright orange (he said his device can actually register 255 gradations of “orange”).

Vazquez asked me to describe the choices before me, while I stared intently into this circle of orange light. I felt anxious and nervous; my chest and neck were tight from the pressure of making this decision.

As I talked, Vazquez changed the color of the light, from orange to blue, then green, then yellow. With each major shift, he asked how I was feeling physically and asked me to describe the pros and cons of the three options. He had explained that the talk therapy helps determine which portion of the brain to target with which wavelength of light.

When my session ended 40 minutes later, on a color somewhere between orange and yellow, my decision was made, and the anxious feeling in my chest had dissipated. Vazquez said that the color orange is related to self-esteem and that his use of that color of light at the beginning, to target the portion of my brain that controlled that emotion, had helped give me the feeling that I could make a decision.

The brain and its workings are still a mystery. There are vast disagreements among clinicians and researchers even about long-accepted treatment techniques. For instance, a 1999 U.S. government study on depression and its treatments concluded that counseling or talk therapy is more successful than drugs at treating depression — and also more successful than a combination of counseling and drugs. British psychologist Irving Kirsche came to essentially the same conclusion after he obtained unpublished drug trial studies on major antidepressants. Clinical trials consistently found the drugs to be only slightly more effective than placebos, he wrote in a recently published book.

Vazquez said he welcomes scrutiny of his methods. “We’re inviting researchers to scrutinize us, to study us,” he said. “We’re ready to be tested.”