Ladies and gentlemen, this is the end of the line. The Hogwarts Express has reached its final destination. Please make sure to gather up all your robes and magic wands before exiting. We hope you have enjoyed your trip.

This week’s release of Harry Potter and the Deathly Hallows: Part 2 marks the end of a vast, ambitious, American-financed but still thoroughly British cinematic undertaking spanning more than a decade. From an artistic standpoint, this run has been largely successful despite a few wobbly moments, particularly in the first two films. From a commercial standpoint, the series has become an object lesson in how to keep a fantasy-adventure saga interesting to moviegoers (not to mention making massive piles of money) over a long period of time. This is one instance when art and commerce shared the same goals; no matter how good J.K. Rowling’s novels were and how devoted her fanbase was, the films needed to stand up on their own and be meaningful to non-fans to remain relevant. For the most part, they have done that. 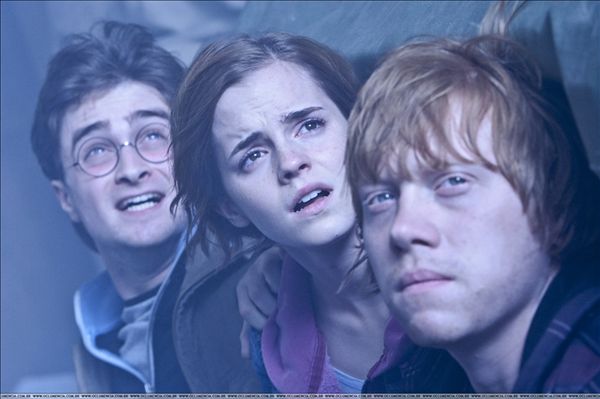 This includes the current movie, which nevertheless confirms the suspicions I voiced in my review of Part 1 that these separate films would have worked better as a single 276-minute extravaganza. Even so, Part 2 functions pretty well on its own, with a slow, lyrical interlude in the middle bookended by spectacular action set pieces. The result is a more satisfying conclusion to a series than The Lord of the Rings: The Return of the King or any other similar film in memory.

Picking up where we left off, our heroes (Daniel Radcliffe, Rupert Grint, and Emma Watson) continue their search-and-destroy mission for the relics housing the fragmented soul of Lord Voldemort (Ralph Fiennes). Their quest eventually leads them back to Hogwarts just in time for an ultimate showdown, as an army of evil wizards lays siege to the school with all of Harry’s allies and classmates inside. His friends must destroy Voldemort’s immortality before Harry can strike the final blow.

This installment is in 3D, and the technology doesn’t add that much to the proceedings despite some sequences (like the rail journey down a series of tunnels at the wizarding world’s bank) that are obviously meant to take advantage of it. The technology does lend itself to some nifty bits of odd business, as in the part when our three main characters run through the rubble of Hogwarts during the climax and seem to encounter different magical enemies at every turn. When you think about all the previous films accomplished in two dimensions, the 3D seems like needless gilding. Then again, if all the 3D does is prevent the screen from going too dark like it did in Part 1, that’s reason enough.

Discouragingly, David Yates on his fourth Potter movie still fumbles some of the key emotional points, particularly the book’s famous “Not my daughter, you bitch!” moment. Though the gargantuan final battle at Hogwarts is built up to superbly, the actual fight itself falls short of the awesomeness that a better action director could have brought. Even stalwart screenwriter Steve Kloves trips up occasionally, like in the scene when Harry takes his leave of Ron and Hermione just before he goes out to meet certain death at Voldemort’s hands. Shouldn’t he have a bit more to say to them?

These shortcomings, however, are more than balanced out by scenes like the early sequence when Harry, Ron, and Hermione try to rob a treasure-laden vault at the bank and are caught in an ingeniously lethal trap. Great British actors have always made this series watchable through its worst times, and this final act includes two brilliant additions: a forceful Ciarán Hinds as Professor Dumbledore’s embittered long-lost brother and an unexpectedly fearsome Kelly Macdonald as an angry, sorrowful ghost stalking the halls of Hogwarts. And as inconsistent as Yates has been at handling the tone of these movies, he does shatteringly right by the extended flashback that reveals the hidden frailty and courage of the terrifying Professor Snape (Alan Rickman), a sequence that gains enormous power coming so soon after the teacher’s sudden, brutally staged, essentially meaningless death.

The close of this eight-part saga clearly shows how these movies have improved on J.K. Rowling’s novels. The books are about children navigating adolescence and becoming adults, and while it’s one thing to read about that, nothing brings home the passage of time quite like watching all these child actors — not just the leads but the supporting players as well, who have almost all been with the series for the duration — gradually turn into young men and women before our eyes, and accomplished ones too. This quality is what makes this series uniquely rewarding, and it can’t be found in books or single films or even most long-running TV shows. When the last train pulls out of the station and sends another generation of kids to school, you feel the fullness of a magical life well lived.