For a show that explores sober themes like the conflict between faith and reason, Amphibian Stage Productions’ Wittenberg has a surprising amount of sex, drugs, and rock ’n’ roll. Playwright David Davalos’ highly literate and irreverent script also contains a mystical vision featuring a pissed-off Catholic saint, a medieval tennis game starring a trash-talking version of Shakespeare’s Hamlet, and a giant of Western theology forming his foundational precepts while struggling with a bout of constipation on the toilet. 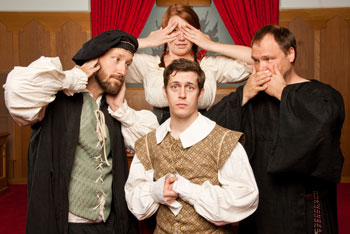 I could reveal more, but suffice to say director David A. Miller and his marvelous quartet of actors achieve a remarkably sophisticated mix of the sacred and the profane, the brainy and the bratty, in this prickly but ultimately sweet-natured production that’s making its Southwest premiere. The obvious choice would’ve been to lean too hard on the cute anachronisms, the bawdiness, and the potty humor. Instead, those tricks turn out to be astute devices that underscore the humanity of this 16th-century mashup in which Faustus, Marlowe’s fictional paragon of nihilism and hedonism, goes head to head with Martin Luther, the real-life Protestant reformer, for the mind and soul of the Bard’s dithering Danish prince.

The simple but stately set design by Sean Urbantke suggests the confrontational nature of Wittenberg: On opposite sides of the stage sit the book-crammed offices of debauched rationalist Faustus (Brandon J. Murphy, radiating self-absorbed charisma) and priggish worshipper Luther (an appropriately pinched and irritable Jay Duffer), colleagues at the famed German university of the play’s title. On the space between their offices is a floor design of illustrated stones that marks the barren middle ground where they and their protégé, Hamlet (Robert James Walsh, palpably yearning), meet to spar, sometimes fruitlessly but always with conviction. That’s another thing Amphibian gets right with this show: highlighting how powerful, potentially influential ideas are worth articulating and furiously defending even if they aren’t immediately influencing anyone.

But Faustus and Luther are at least as interested in insulting each other as in convincing each other during their casual but fiery debates. Their personalities reflect their philosophies of life: Faustus swills booze with abandon, sings anti-authority tunes at the local college hangout known as The Bunghole, and dispenses Moroccan hash candy to students. He also flirts with a bar wench and cavorts memorably with Helen, the fickle object of his desire (both played by an appealingly lusty Jule Nelson-Duac). From Faustus’ viewpoint, personal conscience is supreme, and life is decided by choice, not heavenly design. Celibate Luther also imbibes, citing Jesus’ first miracle, changing water into wine, but he frets endlessly about the corruption in the Catholic Church bureaucracy even as he stands stubbornly by basic Catholic dogma –– the Church can be healed without being entirely dismissed, he insists. Meanwhile, Hamlet has just returned from a summer internship with Dr. Copernicus, the wiseacre who declared that the Earth was not at the center of the universe, so the young man is having fits of existential despair marked by strange celestial voices. (The hash candy doesn’t help.)

Though the ambitions of Davalos’ play are admirable, it’s easy to spot the pitfalls in Wittenberg –– this show would go to hell faster than greedy Faustus if lesser artists decided to do little more than engage the smartass sensibilities of audiences. A typical bid for laughs includes turning the phrase “You da man!” into “Thou art the man!” It sounds cringe-inducing on paper, but Walsh as Hamlet tossed it off unselfconsciously and with real charm. That’s how the whole cast delivers the abundance of cheeky in-jokes, puns, and anachronisms in this production. Thankfully, Amphibian director David A. Miller takes seriously both the scholarly debates and the farcical hijinks, and the expert sense of balance and nuance displayed by his cast makes both endeavors thrilling.

I don’t normally give homework assignments to prospective ticketbuyers, but here’s a fair warning: You need to have a basic understanding of both Hamlet and Doctor Faustus (not a problem for many theatergoers, I’d guess) but also the “justification by faith” reformation theology of Luther to really appreciate what’s going in Wittenberg. I’m not talking about any major cram session, just a quick perusal of a good web resource. Such a small investment of your pre-show time will be handsomely rewarded by Amphibian’s merry band of book-smart mischief-makers.