Bright pop-rockers Green River Ordinance, singer-songwriter Jordan Critz, the shoegazing Constant Seas, and singer-songwriter Dara Maclean are just four Fort Worth artists who are making money the old-fashioned way: by sitting around and doing nothing.

Well, not quite nothing –– they have to make the music to begin with –– but they and nearly 60 other artists from across the country, plus select artists from two record labels, Razor & Tie and Deep Elm, don’t have to do much to get paid by The Music Bed, a song licensing company based in Fort Worth that went live early last month. 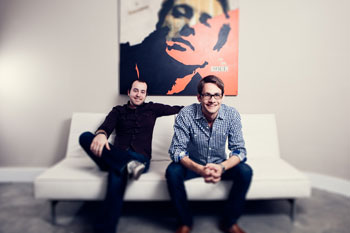 Dreamed up about a year ago by Fort Worthians Daniel McCarthy and Nic Carfa, The Music Bed is essentially a database of songs available for use by photographers and videographers for a price — a fair price, said McCarthy, who, like Carfa, is a photographer/videographer. Royalty-free music, McCarthy said, is cheesy, and the “good stuff” is overused. Getting a great band’s music isn’t necessarily expensive, he said, but it is “very time consuming, which is a problem when you’re on deadline,” he said. “I’ve got three weeks to produce a video, but it will take me three months to get a song.”

McCarthy and Carfa had an epiphany: Find a way to make cool songs available quickly and affordably. At the time, the old friends from Southwest High School were both working at the four-employee marketing agency that McCarthy had established several years earlier, Concept Culture. To get The Music Bed off the ground, McCarthy and Carfa began reaching out to artist-friends, no hard selling involved. “I think the main thing for the artist was, ‘Your music is being used this way right now,’ ” McCarthy said. “ ‘You’re just not being paid for it.’ ”

Yes, many photographers and videographers are not above using an artist’s song without telling –– or paying –– him or her.

One of the first bands that McCarthy and Carfa approached was GRO, whose manager, Paul Steele, was immediately interested. “We get asked 10 times a week if someone can use one of our songs in a video for promotion, wedding, charity, youth group,” Steele said, “and this provides a very legitimate way to go about accommodating those requests.”

McCarthy thinks the decision for artists to, um, jump into bed with The Music Bed is simple. “It’s ‘Either you get paid for your music or not,’ ” he said.

Naturally, he thinks The Music Bed might be a good option for all independent artists, who should be exploring alternative avenues for generating income. A Music Bed song can be licensed for one-time use for $49 and, for unlimited use for one year, $79. “We say, ‘We can’t pay you $5,000 a week, but we can give you $250 a month,’ ” McCarthy said.

Metal-heads and ironists, keep away. For now, most of the music from The Music Bed ends up in wedding videos and promotional videos for nonprofits, mainly churches. However, www.themusicbed.com includes a feature that allows interested artists to upload their songs for consideration. “For a wedding, the music needs to be fairly uplifting and have lyrics that speak to that,” McCarthy said. “It just so happens that nonprofits need the same kind of music.”

Music Bed artists can update their online catalogs themselves. “They have a lot of control over their music, and they can also see how much money they’ve made for the month, how many downloads, and get automatic payments at the end of every month,” McCarthy said.

And the “old-fashioned” way is definitely in effect when talking about The Music Bed’s approach to marketing. “It’s social media for mostly everything,” McCarthy said. “People sharing links and talking about us is a big way of gaining users.”

McCarthy and Carfa are also about to direct-mail a compilation CD to top photographers and videographers in the United States.

The Music Bed doesn’t have much competition. McCarthy could find only two other companies similar to his. Both, he said, focus on individual songs rather than artists and aren’t nearly as edgy, relatively speaking.

In one month’s time, the number of Music Bed users has doubled, a good sign for McCarthy and Carfa. And their artists.