Not everyone can make weird seem sweet, endearing, possibly even cool. Check that: Most people who are outwardly weird are scary. You fear for them if not fearing for your life in their very presence. But ask anyone who knows Chris Hardee, whose songwriting vehicle is the art-rock project Alan. No one would confuse him with a PBS news anchor. In conversation, he may burst into song, go off on wild tangents, or make little exploding noises. Bbblllggghhh! He also wears toe-shoes –– basically, gloves for your feet –– which is unforgivable unless you’re working out, and even then it’s borderline.

But Hardee, with his Lennonesque facial features (closely set eyes, longish nose, pointy chin), is as affable as anyone you’d ever met. A hippie might say the early-thirtysomething native Fort Worthian radiates positivity. Undoubtedly, Hardee’s unique ebullience is born of his immense talent. Merely saying that he plays several instruments and has one helluva voice would be a flagrant disservice to his genius. (That’s right. “Genius.”) Hardee doesn’t just write songs. He orchestrates them. He doesn’t just play guitar. He owns it. He doesn’t just sing. He gives your ears wings. Hyperbole? Yeah, a little, but there is a distinct difference between the music of Alan and that of most other art-rock bands. Genius versus merely talented is probably the likeliest explanation. 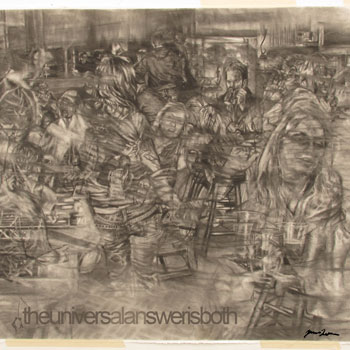 In the recent 2011 Fort Worth Weekly Music Awards, readers voted Alan the Comeback Band of the Year, no doubt moved to the polls by Alan, The Universal Answer Is Both. More than five years in the making, the 16-track monster, replete with an overture, interludes, and an “outro,” is spellbinding. Until the album’s release in January, Hardee, as Alan, had released only one recording, a demo EP, in the early oughts, even though Hardee began writing and performing in the late 1990s as an undergraduate at the University of North Texas. (Music prevented him from finishing his degree.) “Once you do it right, you don’t have to do it again,” Hardee said of the recording process’ long duration. “But [The Universal Answer Is Both] needed to be right first,” meaning that many long nights were spent fine-tuning the finished product.

The album, indeed, is pretty “right.” It’s easily one of the most ambitious recordings ever to come out of North Texas. “Melodramatic” is a pejorative that some observers have applied to the music, a symphonic sound that hasn’t changed much over the years, fads be damned. “Serious” is perhaps more apt. Twinkling guitars often give way to crashing waves of chord progressions –– you can’t rightfully call them “riffs,” because most of them ring and shift dynamically, functioning mainly as bedrock for Hardee’s vocal coloratura. And his voice: Precise and sibilant, it’s high but strong and capable of reaching the rafters –– at the height of his band’s sweeping bombast in live settings Hardee can step away from the mic to hold a note and still be heard above the din. Pretty impressive.

The album was recorded partially at Hardee’s parents’ Fort Worth home and partially at the modest Westside house that he shares with three other young musicians/hipsters. The walls are mostly bare, the living room is piled high with gear, and a drumkit monopolizes the dining room. The home studio is frequented by several local artists, including the outré-rock duo Ice Eater, generating a little scratch for the Alan frontman –– with studio money and money from teaching music lessons, Hardee generates enough to get by. He personally financed the production of 1,000 copies of The Universal Answer Is Both.

Over the years, backing musicians have come and gone. Hardee’s most recent rhythm providers, drummer Jeffery Lowe and bassist David Young, have moved onto different things (but remain friends with Hardee) and have been replaced by housemate Andy Weaver and Dentonite Adam Skokan-Guinn respectively –– Alan is in the process of recording a follow-up to The Universal Answer Is Both, slated for release on Nov. 11. (Hardee’s into the numerology thing. He released The Universal Answer Is Both on Jan. 1, 2011, or “1/11/11.” Evidently, “11/11/11” also means something, numerologically speaking.)

One collaborator who has remained steadfast is violinist Douglas Edward, who’s performed with Calhoun, The Paperchase, and Brandin Lea, among many others, and for a living writes scores for movies, TV shows, and commercials. Now if the thought of hard-rock guitars with violins has you seeing visions of velvet capes, guyliner, and bleeding hearts, don’t worry. While often emotionally vulnerable –– much like some of Alan’s music –– Edward’s playing is always tasteful. He’s equally at home providing powerful, frequently mournful, occasionally artfully angular lines that dominate entire sonic tableaux or enriching passages, adding depth and texture.

The Universal Answer Is Both is definitely the work of an artist with a vision. None of the songs is predictable. Some middle sections may meander, bleed into other songs, or, as with the track “237” (numerology again), divert from the path entirely. The song begins with a skipping beat, snaking bassline, and twinkling guitar figure over which Hardee sings plaintively. A huge, crunchy riff, punchy and percussive, suddenly materializes, underlining the drama (not melodrama, see?). The middle, however, dissolves into a quiet reverie in which Hardee participates in an ethereal call and response with guest vocalist Cerena Collins. The rest of the song marries the daydream with a mad, frenzied version of the main riff.

What has always kept Alan firmly in the indie-rock realm rather than the (dorky?) prog-rock hinterlands is the band’s reluctance to get all wonky. Instead of extended solos, Alan opts for grand, often pianistic sonicscapes more partial to Copland at his most bucolic than to anything qualitatively rock or jazz. Of course, The Universal Answer Is Both is not without loads of technical wizardry. Edward can spin elegant curlicues around even the thickest, most propulsive movements, and Hardee can strike knotty chords all over his fretboard without ever once fudging a note.

MTV has expressed interest in licensing one song, “Atlas.” Hardee is not interested. Sipping on a cocktail from an oversized plastic cup at his house recently, he said the song means too much to him to see it chopped up into bits and fragments. The song’s original title was “Atles.” “See that?” he said, smiling, pointing at a white box labeled “The Beatles,” specifically at the last five letters. “A-T-L-E-S.” Eee-yeah …

Hardee is working on several other projects, including a possible collaboration with international singer-songwriter Imogen Heap, whose first crowd-sourced song, “Lifeline,” includes a contribution from Hardee: “Water in My Pasta Pot” is a boing created by thumping a pasta pot partially filled with water. Heap has 6,705 followers on her page on Soundcloud, a Facebook of sorts for musicians. She follows only two artists: some dude Sowick and Chris Hardee.

At some point next year, Hardee hopes to tackle his envisioned 100-man (and -woman) project, in which about that many mainly local artists will collaborate on a song under Hardee’s orchestration. “Just good musicians, not shitties,” he said. “We’re all gonna get together, and I’m going to try to get everybody and their uncle to play, and then the conductor in the middle, and then brrrshhhh!, y’know?” Hardee began playing assorted instruments in the air. “ ‘Let’s do this song!’ Kkkkggaaahhh! And whoever’s down for it.” He caught his breath. “It’s Polyphonic Spree on steroids, basically.”

Listening to The Universal Answer Is Both still makes Hardee sob. “It just feels like it’s been a long time coming, and when you accomplish something that big and huge, you get a little overwhelmed with it,” he said. “It feels great to listen to it, but at the same time, you’re, like, ‘Damn, that’s not me! That’s somebody else!’ … It’s just like multiple personalities. It’s fucked up. I feel it. But when you get onstage, you turn into a different person. It’s a whole different beast, a whole different genre of passion.”